Paris remains a favorite for buyers attending apparel trade shows, but Tranoï's new director says the city can do more.

PARIS — Paris was a top choice for international buyers looking for exclusivity at some of the largest ready-to-wear trade shows, recently held in the French capital: Woman, Premiere Classe Dressing, Vendôme Luxury and Tranoï, which recently appointed a new director.

“I only come to Paris, because it’s all here. Everyone shows in Paris,” said Nancy Herdlinger, owner of Nancy, in Georgia, while visiting Tranoï at the end of September. The show recently named Boris Provost as its new chief executive officer, replacing David Hadida, whose family founded the event. Armand Hadida will remain artistic director until March 2020.

Provost, who has experience working on the executive team for Paris show organizers, WSN Développement, and more recently at Reed Exhibitions’ hospitality and food division, said one of his goals as president would be to bolster Paris’ position as a leading fashion week destination, by closely cooperating with other trade shows, and consolidating Tranoï’s various venues by March 2020. The event’s locations include the Carrousel du Louvre and the Palais de la Bourse (held Sept. 27 to 30), showrooms on Rue de Richelieu (Sept. 27 to Oct. 2) and Tranoï Week in the Marais (Sept. 25 to Oct. 1).

“Paris has been criticized with the ‘yellow vest’ protests, and the way we host people, so I would like to work better with other trade shows, more as a collective, to really promote the city and all its offerings, and make the trip here easier,” Provost said.

About taking the helm of Tranoï, he said, “There’s a story to tell and build, between what Armand and his family developed for more than 20 years, [and] another story, regarding digital influences, and new ways for the organization and distribution of fashion, plus what a trade show has to be today.”

Provost said it was all about connecting brands and buyers. Coaching young designers on good business practices are among the programs he’d like to develop, noting that brands are willing to invest in exhibition space if additional services are provided. In addition, he said influencers and social media would play a larger role in the show.

Tranoï exhibited 380 brands this year, versus 450 in the last edition, because of a more open floor plan at the Palais de la Bourse venue, reducing booth space and the closing of one room in the Carrousel du Louvre venue.

At the Woman show, the big news was the presence of Marimekko, which chose the venue to showcase its latest collection, marking the arrival of new designer Satu Maaranen, who has taken over the brand’s rtw and accessories lines. “That’s meeting the market where it is,” commented Jill Donnelly, owner of Baby & Company in Seattle.

Hanna Janzen, senior buyer for premium women’s wear at Zalando, the e-commerce site based in Berlin, loved Marimekko’s latest collection, and has stocked the brand since the arrival of Maaranen. “I look for outstanding products, that are visually interesting, and Marimekko, which is known for prints, is a super good online product for us. I specifically like the coral shades in the latest collection. It’s very fresh and very nice for dressing up for an occasion as well,” she said.

Janzen said business has been robust for the fast-growing company, particularly in the premium department, with a lot of new brand additions. Other trends that have worked well for Zalando include utility wear, pastels, yellow tones, nude shades and suiting.

“We’re generally looking for a lot of occasion wear and dresses and floral prints. Checked prints are still a big topic, specifically when they are matched with different prints. In the online world, you’re looking for more cheerful color, and a strong brand identify. Marimekko has that,” she added.

Sarah Burton, head buyer for fashion and beauty at Fortnum & Mason in London, said sales have grown strongly, fueled by American, Japanese and Middle Eastern tourists, though a dip is expected in November, with uncertainties around the impact of Brexit. She enthused about Janessa Leoné’s hats at Woman, some of which had detachable scarfs on the inside. Their new collection of packable hats is made out of raffia traditionally crafted in Madagascar.

Louise Weinreich, owner of Studio Grundahl in Denmark, said the latest edition of the Woman show was one of their best. “This show is more for us. I like that you can always find real fabric texture here, linens, cottons. We’re very into the Japanese style, oversize, street and not so body conscious, with more drapes and texture. Because we’re Scandinavian, we look more like our architecture,” she said, citing F/CE, Kowtow and Marimekko as highlights.

Sasha Krymova, owner of Dear Progress in Moscow, said her country’s economy was slowly recovering from crisis mode. “Business has been hard. The economy is still dealing with problems from 2012 to 2014. We tried to regroup our business in order to survive one of the hardest moments in our economy, so that means we have more Russian brands and styles, but the rest of the store is international. In terms of price point, the Russian designers are cheaper,” she explained. Krymova said summer sales improved, and she remained optimistic.

She loved Nensi and Supriya Lele at Tranoï Week, because “they are fresh. It’s something new on the market. I just love this easiness about them. It’s so direct, in the way they communicate to customers.”

Krymova said lingerie has become more widely used as outerwear, with examples like Nensi’s lingerie and Nineties-inspired collection, which “speaks about openness: that people are becoming more transparent, that you have to accept your body, and only a person with a strong mind-set will wear those pieces.”

Olga Serras, buyer for Dandelion in Spain, said Tranoï was noticeably smaller this year, and that she was looking for “something easy to put on, that you don’t have to think about in the morning.” She said business was going well for the boutique, with customers becoming increasingly loyal. She spotted a lot of tie-dye, greens, oranges, pinks and oversize silhouettes, with large, chunky shoes still going strong.

As of last year, the legacy Finnish brand’s design has been led by a former Festival d’Hyères winner, Satu Maaranen. For her first summer collection, the brand has gone back to its roots, to focus on fun flower prints, inspired by Sixties “flower power,” which was when Marimekko started, and was working around those same ideas of freedom and rebellion. The brand said it chose to show at Woman in order to be positioned with other emerging designers, in a statement about the renewal it is experiencing via Maaranen’s arrival.

The latest collection introduced more materials and richness in textures, along with its signature, quirky accessories, such as bright, statement canvas tote bags.

Accessible, fun and easy to wear, the collection was a main attraction at the salon. A special streetwear collection was also introduced in September, in response to interest from men who wear some of the brand’s more unisex styles. 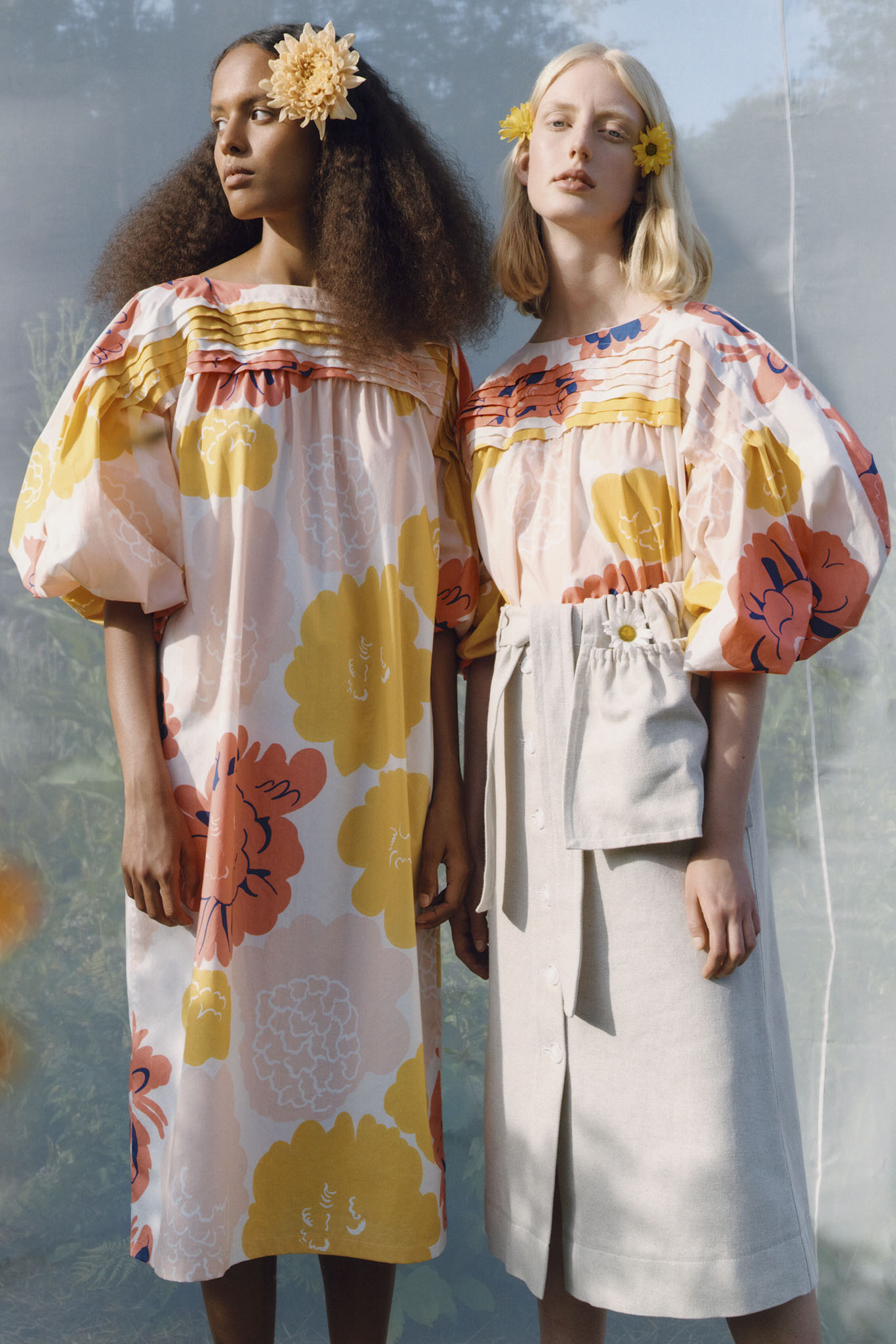 Designers: Pavel Lozanov and Teodora Lozanova, and a design team

Launched in 2016 in Bulgaria, Bogdar is a contemporary spin on the designer’s family business, which has been tailoring clothing for luxury brands for three generations. All fabrics are Italian, with sustainable sourcing and execution, thanks to in-house production.

The latest collection was inspired by surgical cuts and melted metals, jewelry-like buttons, with a lot of puff shoulders, and pastel colors. 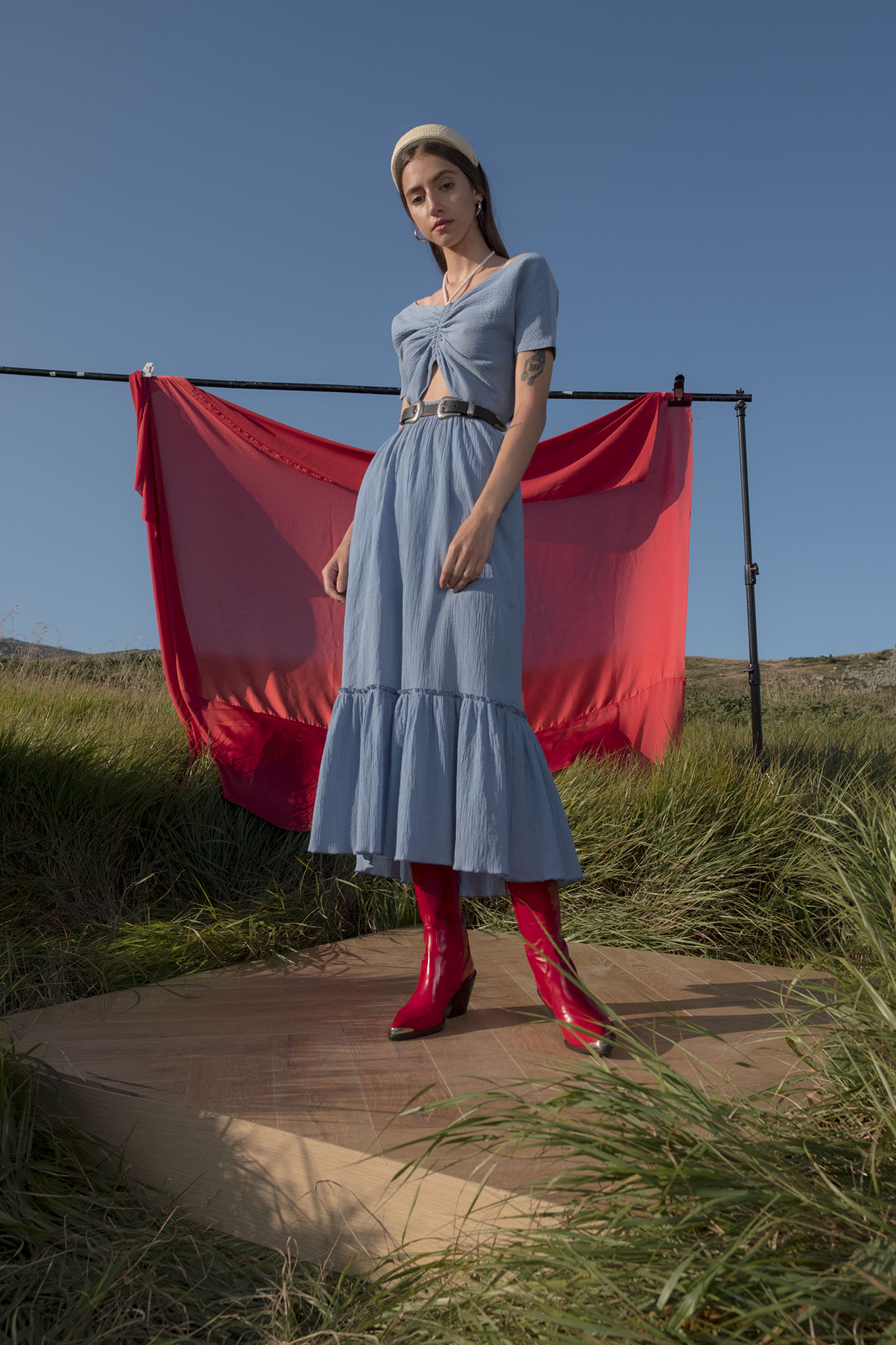 This Los Angeles-based brand uses breathable fabrics and eye-catching, subtle colors to create sophisticated, relaxed and effortless styles with a lot of variety. The line ranges from more structured, to relaxed, easy pieces. Prints are all designed in-house, made with Indian and Chinese artisans.

The spring collection was inspired by the colorful, geometric forms O’Dell saw in a Hilma af Klint art exhibition. 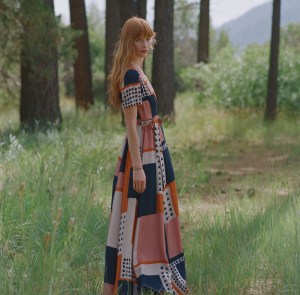 For this Spanish label’s fourth collection, Llambias Isern said he did not follow any trends, but “listened” to his parents who are artists, and the women who wear his clothes. “I try to follow my own vision, and make comfortable things. I take my time choosing fabrics, and try to go slow, put a lot of care into each garment,” the designer said. Long dresses and pieces that drape over the body came of long discussions with his customers. Everything is produced in Europe. 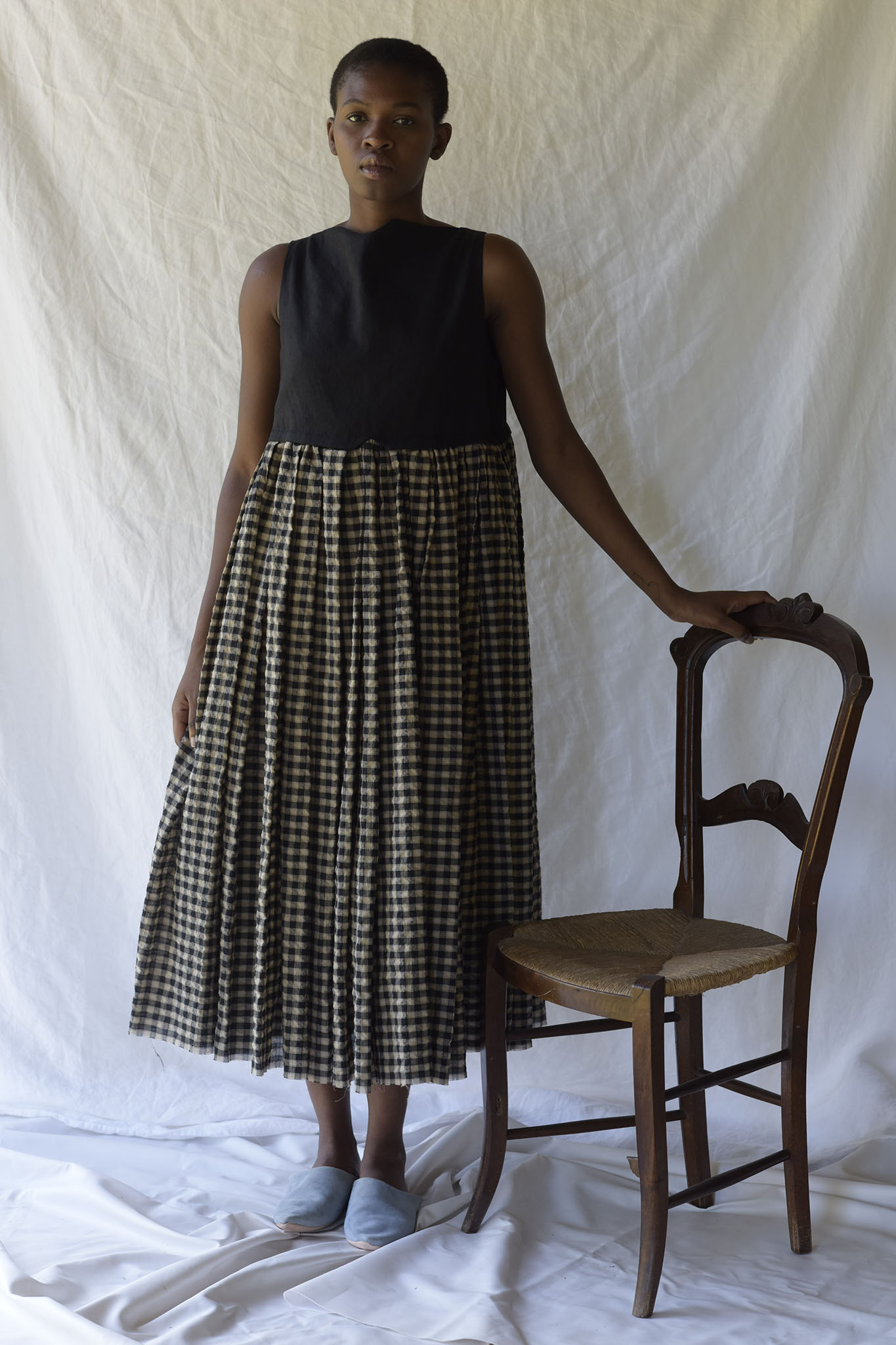 Imagery included skulls depicted with a cartoony aesthetic, while a cute little bag was coupled with darker imagery printed on it. A key piece was the airbrushed graphic of dogs on corsets, to effectively combine “trashy” elements, or “sickly pretty,” with sleek eveningwear. “I really like things that clash, where the idea of them doesn’t sit well together, but then in reality making them work. And that line between ugly and beautiful, and bringing that together. I always start there, because it’s my natural aesthetic, and what I find interesting,” Williams said.

Explorations with knitwear, including bikinis, were also fun additions. 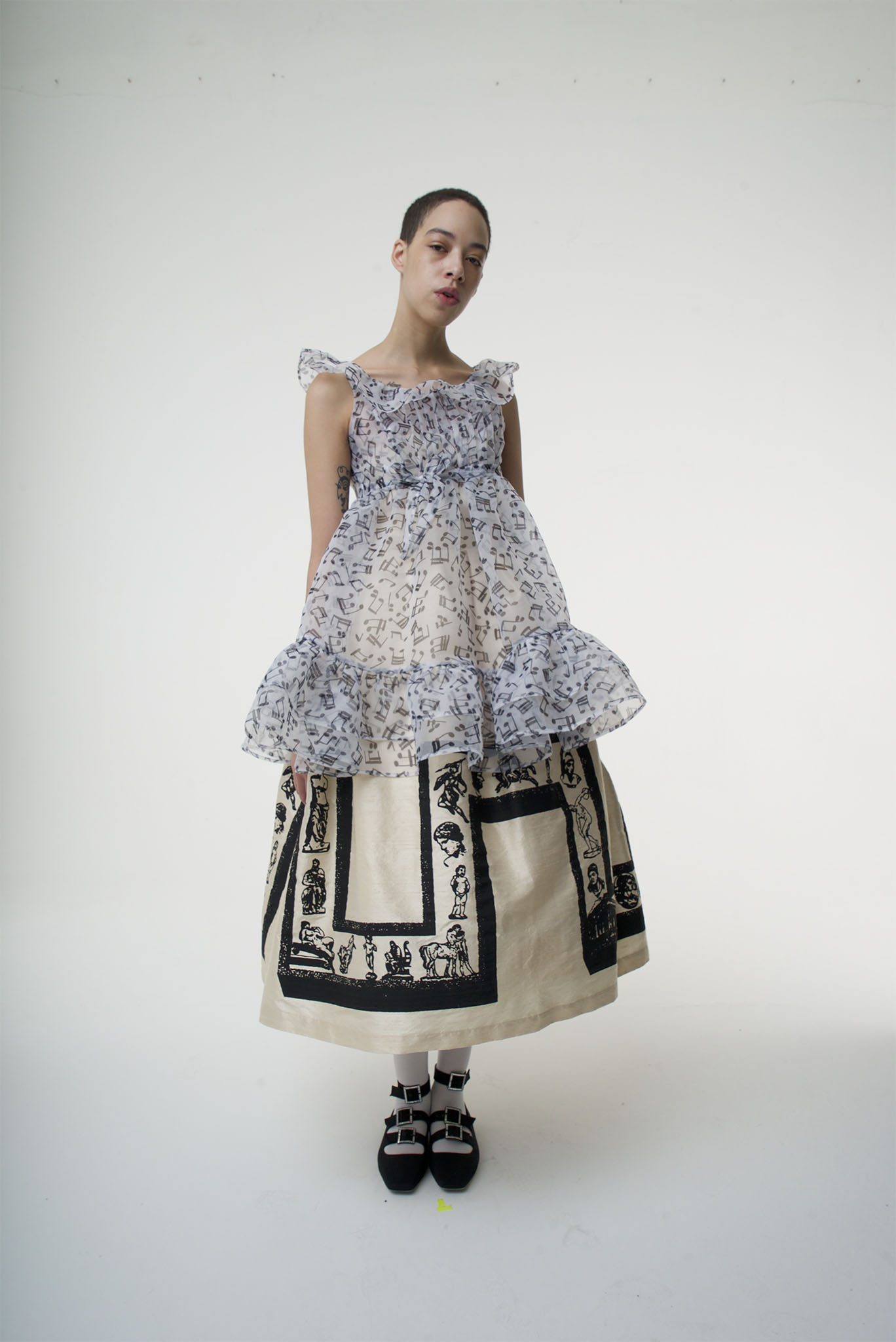 For her first collection since graduating from Central Saint Martins, the Albanian designer, who now lives in the U.K., was inspired by lingerie, which she sees as women’s wear. Light organza pieces are designed by draping them, or minimalist bras are visible as tops or on dresses, with a mix of high-end finishings and more raw details, creating an edginess that almost takes some of the sexiness out of their exposed quality. The Nineties were also an important inspiration, according to the designer.

Retail Prices: $1100 per dress, though prices are still being worked on for this collection. 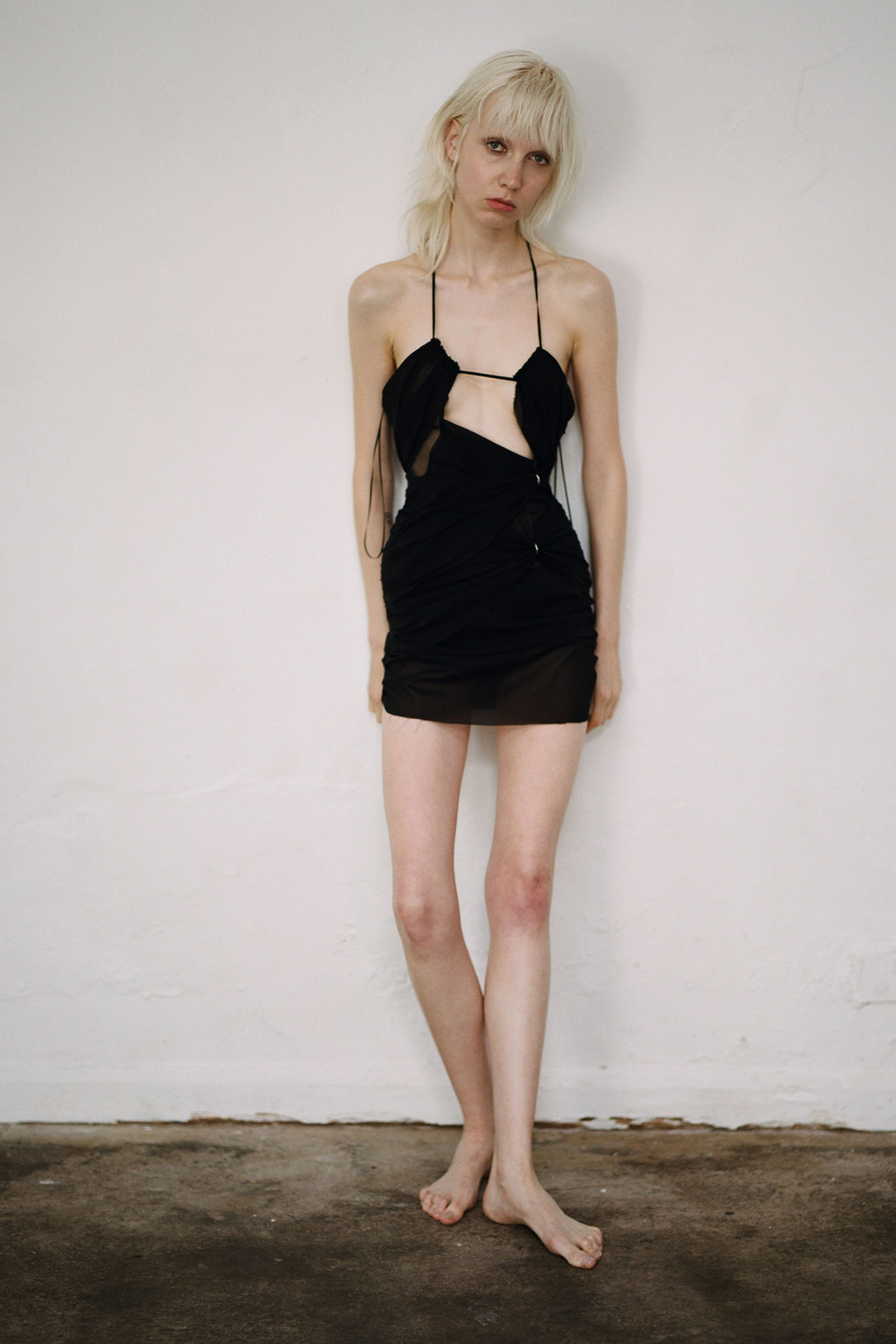 This young French graduate from Central Saint Martins won a scholarship from LVMH in 2019 and displayed his first collection at Première Classe, which became a huge hit with visitors. Inspired by futuristic architecture from the Sixties and Seventies, Benmoyal designed imposing structured, metallic sparkling pieces out of his own fabric woven from recycled cassette tape and deadstock yarns. Working with whatever deadstock he can find, most pieces are limited. 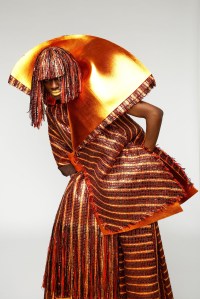 This secondary collection from Monique Lhuillier, known for her red carpet gowns and bridalwear, has two components: a full eveningwear line, and a more elevated daywear aspect. Shades of a tropical sunset inspired the collection, including lilac, hibiscus, peony, sea glass and mint, to name a few. Signature laces, florals, and feminine details were also featured, along with modern off-the-shoulder, metallic knitwear pieces, and structured silhouettes made easier with polka-dot jacquard prints. For evening, relaxed and seductive silhouettes come in silk, colorful sequins and lamé fabrics. 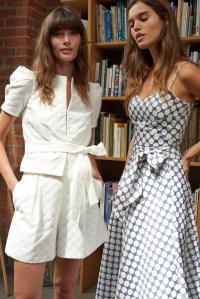 This emerging brand made in India uses extensive research and artisanal techniques to create a wide range of textiles and structured, layered designs that speak to Western audiences as well. 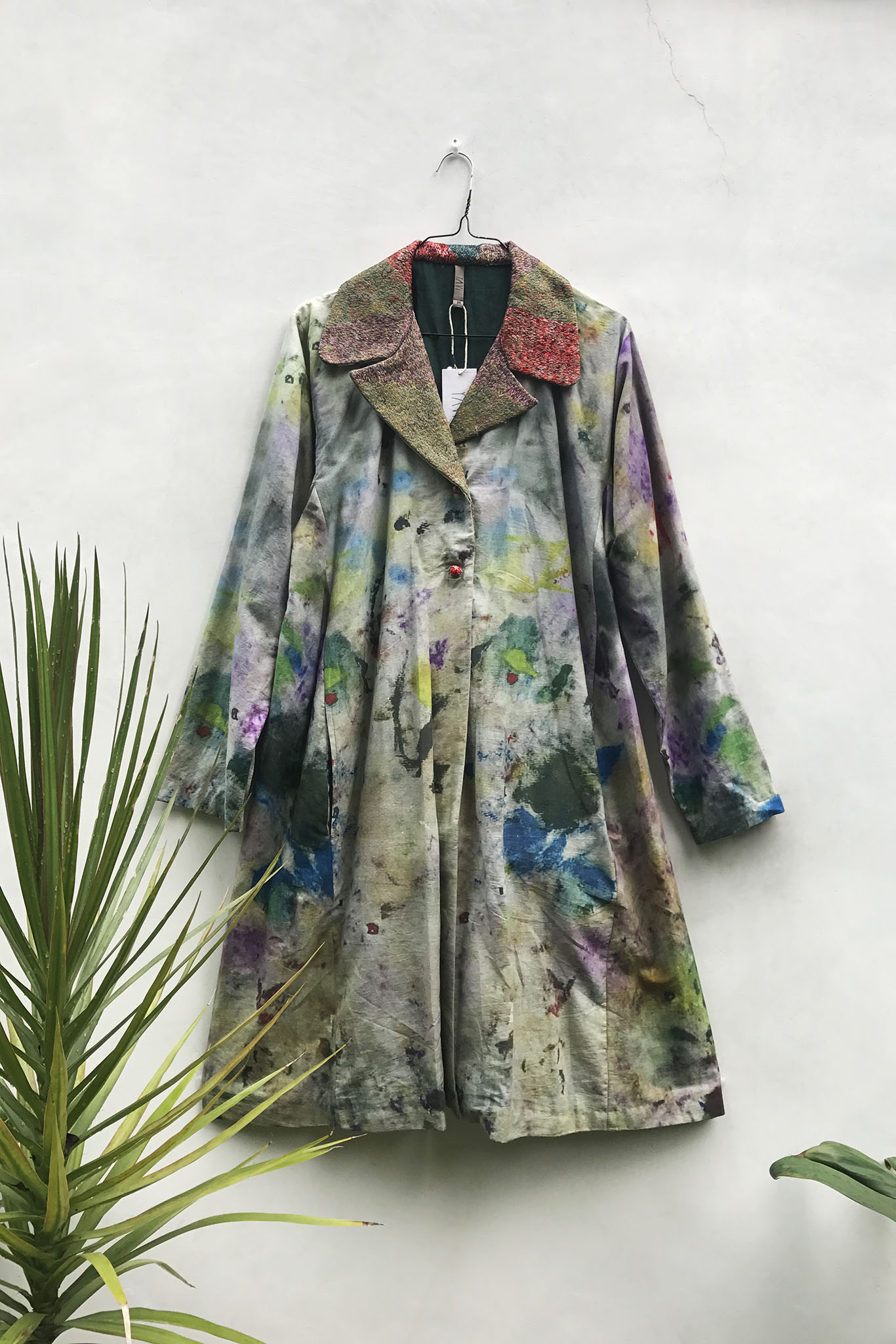 Originally from South Korea, and based in New York, Sung is inspired by her East-to-West global travels, and creates hand-painterly, artistic prints, which she adapts to her signature Audrey Hepburn-style cotton shirt dresses. Printing is done in South Korea, and sewing in Bali.

Buyers loved these tailored-at-the-waist dresses, which came in an endless selection of bright and unusual prints inspired by the fine arts and nature. Each print is available in 10 different shades, and all prints are done by hand and exclusive to the brand. 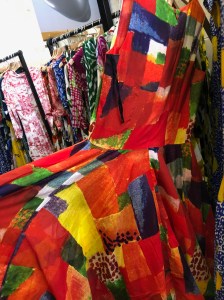