As the European collections season hits full swing, retailers continue to digest the New York shows, which provided a mix of styles from power women to tomboys. 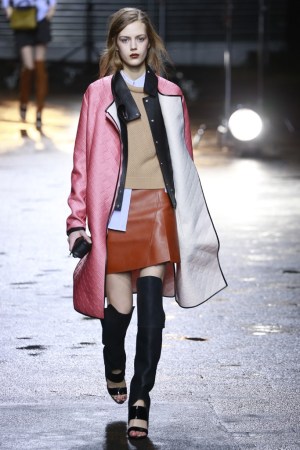 NEW YORK — As the European collections season hits full swing, retailers continue to digest the New York shows, which provided a mix of styles from power women to tomboys.

Oversize outerwear, motorcycle jackets, luxe sweatshirts and knee-high boots were among the key items, as were tailoring and chunky knits. Buyers said they were strategic in their purchases, upping their buys for collections that were unique and well priced.

Some saw the angular lines and men’s wear influences such as sharp shoulders as a welcome shift from the flowing, flouncy bohemian looks of recent seasons. “There was an interesting tension between the power woman and the more masculine, androgynous influences,” said Linda Fargo, senior vice president, fashion office and store presentation at Bergdorf Goodman. “The collections didn’t seem to have quite enough to say. There was a carryover in the continuum for clean, minimalist dressing alongside uniform-inspired looks, which are always appealing but not very new.”

“There’s a new sensibility in fashion,” said Nevena Borissova, founder of the Curve boutiques. “It felt fresh to the eye.”

However, Tomoko Ogura, senior fashion director of Barneys New York, wanted to experience “a bit more of the particular charm and energy of New York.” There were bright spots, such as the collections of Proenza Schouler, Derek Lam and Narciso Rodriguez. “Proenza Schouler’s collection was directional,” she said. “It felt elevated but still infused with their youthful downtown spirit. The appeal of the more grown-up sensibility will be strong at retail.”

Ogura said Rodriguez’s colors were “beautiful and in the showroom, we discovered the prices were great too.”

“Ralph [Lauren] showed one of the most breathtaking collections he’s done,” said Stephanie Solomon, vice president of fashion direction of Bloomingdale’s. “It was a perfectly balanced show with so many pieces to buy. Marc [Jacobs] was worth the wait. He has an acerbic sense of humor and he’s glamorous. It was actually a wonderful ending to New York Fashion Week.”

Black and white predominated on many runways, and some retailers bemoaned the lack of color. “There was probably far more black than was necessary,” said Ken Downing, senior vice president and fashion director, Neiman Marcus. Jyothi Rao, executive vice president of fashion for Gilt Groupe, said it’s a challenge to show detail on black and white garments online. “Online, color and patterns really pop out and tend to do well. I didn’t think there was anything revolutionary happening” in the fall 2013 collections.

Jeffrey Kalinsky, executive vice president of designer merchandising at Nordstrom, said, “Our favorite collections were Jason Wu, Proenza Schouler and Marc Jacobs. All three designers made what could have been considered ‘classic’ look new, modern and desirable. If clothes don’t seem new, modern and desirable, then our customers don’t want them. Our open-to-buy is up for brands that have a compelling offering.”

Colleen Sherin, senior fashion director at Saks Fifth Avenue, felt designers delivered with “a combination of tailoring and luxe sport and a focus on sportswear separates. The advanced contemporary market really stood out this season.”

“Tailoring, that’s the news,” said Suzanne Timmins, fashion director of Hudson’s Bay Co. “I’m all for structure. I’m a little fatigued of the drapy-drapy, silky-silky. It was a smashing week, actually. I haven’t seen that for years. The trends seem to be going toward really wearable clothing. Proenza Schouler and Joseph Altuzarra — these guys have gone to the next level.”

Timmins said Hudson’s Bay Co.’s open-to-buy will be up. “It will be up in our contemporary business and advanced contemporary,” she said. “In designer, we always add one or two on. We’re going to increase our budgets for the designers that we have.”

“Its not about themes and trends anymore,” said Sarah Rutson, fashion director at Lane Crawford in Hong Kong. “I like that designers are looking at who their woman is as opposed to being heavily influenced by what others have been doing and referencing. I was also very happy not to see a lot of eveningwear. Designers came down to earth for real clothes for day.”

Rutson praised J. Crew — Lane Crawford carries the brand in Asia — for being “absolutely off the charts in terms of desirability. Victoria Beckham and The Row pulled out stunning collections, and Rag & Bone, Jason Wu, Proenza Schouler and 3.1 Phillip Lim were all about the showrooms.”

Nicole Fischelis, group vice president and fashion director at Macy’s, said, “Oscar [de la Renta] was very beautiful. It was very classical. It was courageous. The result of the harmony between the two [de la Renta and John Galliano] made for a wonderful collection with a new silhouette, colors and the attitude of the models. Ralph Rucci was masterful, and Ralph Lauren was a dream, with very valid, elegant real clothes.”

Carmen Borgonovo, fashion director of my-wardrobe.com, based in London, said, “There was a refinement to this season. A lot of designers really championed the trend of minimalism by adding a sense of luxurious.”