Designer and fabric buyers discuss what they're hunting for at Milano Unica, Pitti, Première Vision and Spin Expo NY. 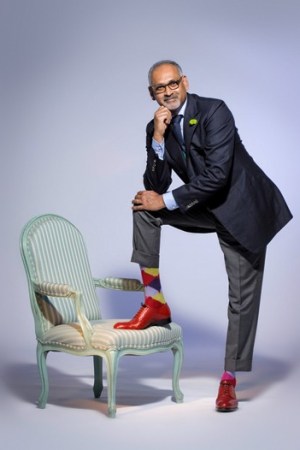 With budgets so tight, selective shopping has become the norm, and retailers are looking for just the right shirt to entice their picky customers. Here, designers and fabric buyers tell WWD what they’re hunting for to create that special look and where they’re seeking it.

Sourcing: Joseph likes Italy, Switzerland and the U.K. “I’m hearing that consumers are looking at where raw product is coming from. Luxury retailers are talking about it, too.”

Specs: Joseph sees a trend in checks. He is also focusing on plain white and pastel hues, along with slim fits and washed vintage fabrics.

Economy: “I’ve been very lucky and wise in keeping my company lean, given the current circumstances.”

Business:“People are buying three shirts instead of five. They are also very particular about pricing. It is advisable, though, not to raise prices, but also not to go below margins. Keep overhead low.”

Shows: Milano Unica and Pitti. “We needed to choose one [city] and if you go to Milan, you can also visit suppliers.”

Sourcing: “We love the speed, service and design from India, and the creativity from Italy.” Reed also sources in China and Peru.

Specs: The team is looking for more relaxed formal shirtings that can be worn with jackets and slim-cut trousers. Interesting color combinations are favored. “White and blue is a little dull now.”

Economy: Reed is ordering later and closer to the season because of inventory concerns. “We work with fewer mills. I believe some consolidation needs to take place in the market.”

Business:“Our business had to become more flexible. This will be more important than price in the coming years. We also all need to innovate more and give the customer a reason to buy.”

Shows: “I only attend Milano Unica, but the timing this year is basically overlapping with New York show week. I wish the organizers would consider this next time when they are laying out the calendar.”

Sourcing: “We mainly source fabrics from Italy, with a little from England — mainly moleskin and Shetland wools — and Japan for denim and a few technical fabrics.”

Specs: Bastian’s fall collections lean toward the rugged and outdoorsy side. For shirtings, it is all about simple, traditional beefy fabrics in checks or stripes that stand up to a lot of washing. “It’s like a guy’s favorite work shirt that he’s had for 10 years. And we’re always hunting for traditional brushed tartan flannels, which no one seems to do any more.”

Economy: Bastian is focused on good, solid basics, including oxfords and poplin Bengals at a fair price and low minimums. “The minimum issue is always the Achilles’ heel for young designers. Someday, we little guys are going to be bigger, and the mills that are flexible and willing to work with us now are the ones that will get our business down the road.”

Business:Bastian said his business has remained strong during the bad economy, with spring 2009 having some of the best sell-throughs for shirts, knits and swim.

Shows: Première Vision, Première Vision Preview and Spin Expo NY. “Milano Unica sort of overlaps greatly with Première Vision, so I don’t feel as though I am missing anything if I don’t attend. Every once in a while, I have a moment where I feel like there are just too many shows.”

Sourcing: Italy, Spain, Portugal, China and Japan. “Getting something well-priced is probably my biggest challenge. A depreciating dollar doesn’t help. For spring, I loved Tessitura Monti.”

Specs: “Value is key. Shirting has to be special and not ubiquitous.”

Economy: Carreras is being much more selective with what he buys and what he’s willing to try, but he is not buying less. “I am being much more sensitive to the cost of raw materials, fabric being the biggest component of that.”

Business:“After a pretty precipitous drop last year, business has started to pick up, with a lot of that growth coming from international accounts.”