By Luisa Zargani and Emilie Marsh and Jean Scheidnes on June 23, 2010
View Slideshow 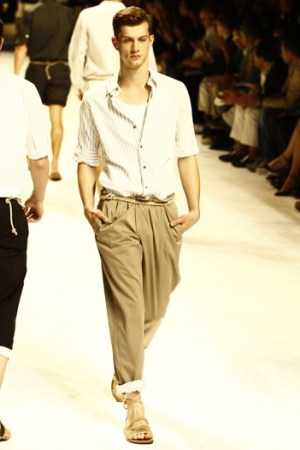 MILAN — In a season of anniversaries, Italian men’s wear designers continued to reference their archives while simultaneously moving fashion forward.

“The best shows were the ones where designers started innovating again,” said Richard Johnson, men’s wear buying manager for Harvey Nichols. “Past seasons have focused so much on heritage, but this season, the best shows experimented with color, fabric and form.”

Overall, the mood was upbeat. Buyers said they were working with budgets that had increased in the single digits, adding more chic sportswear to their offerings.

“It’s not about dressing down the suit, it’s about dressing up the sportswear,” said Holt Renfrew’s Lanita Layton, vice president and general merchandise manager for men’s and men’s footwear.

Tailoring grabbed its share of attention, too. “If there is one new item I think a guy should add to his wardrobe, it would be a double-breasted jacket. It looks really fresh when it’s trimmer, shorter and rumpled up,” said Nick Wooster, men’s fashion director of Bergdorf Goodman and Neiman Marcus.

Here is what buyers had to say about the Milan collections for spring.

Tom Kalenderian, executive vice president and gmm, men’s, Barneys New York: “As with fall, it was a more commercial approach with some collections than in the past. Oftentimes they miss on fabric. Our climate is different from what they think they’re designing for. But in a sense, I think they achieved a strong lightness in feeling. From a commercial standpoint, the fabric weights were especially focused on lightness, which is critically important. I liked the use of linen. It was very layered and textured so you didn’t see skin through it. And I loved the freshness of the white. There’s a lot of monochrome with all white or all navy, which I thought looked very fresh. I really loved Bottega Veneta. Tomas Maier did a very good job coming up with truly spring-summer apparel, and it felt young in spirit.”

Jason Broderick, men’s wear gmm, Harrods: “We are looking for newness in brands — now is the time to invest. We are confident in the men’s market. We have seen some great successes and continue investing more in open-to-buy. We have increased our budget for spring. Consumer confidence has definitely returned, particularly in tailoring at a premium level. Designer wear has the most desirability from our consumer. In terms of the fashion message, there was a great spin on the Seventies with a jive feel. Burberry, Gucci and Dolce & Gabbana continued to deliver with very strong staple collections true to their DNA. Jackets were prevalent across the board as this part of the business is growing as an item piece. Double-breasted jackets made a stronger presence in this season’s collections. Sportswear was high on the agenda, such as at Moncler. Pop colors like at Z Zegna made a statement, but palettes waded toward the Arizona landscape of muted tones.”

Tancrède de Lalun, gmm, women’s and men’s apparel, Printemps: “Overall, it wasn’t a great season. Houses seemed to do their own thing. Each had a very different story. The jacket as a single item was the strongest statement. Suits were less important. The look is less dramatic, more cool. The highlight was Prada, which was magnificent and really offered something new. Dolce & Gabbana put on a fantastic show. We are increasing our budget, albeit slightly. Consumer confidence has returned and we are optimistic, even despite the current economic climate. We are also saving for replenishments in case the season goes very well.”


Sarah Rutson, fashion director, Lane Crawford: “It’s a very wearable season, but not the strongest, nor the best. In some respects, the fact that the clothes are not hiding behind the trick of being overstylized or too technical is a good thing, but in the process, some individual elements were lost. A sea of natural cotton over synthetics and technical finishes reigned supreme, together with clean, simple lines and unfussy silhouettes. The shoe for the season is certainly going to be a new reworked version of the Birkenstock. Standout shows were Prada and Prorsum, from start to finish and head to toe.”

Eric Jennings, vice president and men’s fashion director, Saks Fifth Avenue: “I’m excited by the dichotomy between ‘experimental’ and ‘wearable’ design in Milan this season. The collections have struck a wonderful chord between art and commerce, from the dark and daring of Neil Barrett to the fabric innovations of Ermenegildo Zegna, we’ve seen something here in Milan for all our customers. I’ve been especially inspired by the focus on ‘bleisure’ dressing this season: the seamless transition from business to leisure. I think this is really something American men are looking for right now. I’m also inspired by the use of technical fabrications and athletic details being utilized in clothing as well as sportswear. I think these innovations will definitely resonate with our customer.”

Nick Wooster, men’s fashion director, Bergdorf Goodman and Neiman Marcus: “We have been struck by how diverse the offerings are. Spring-summer 2011 truly is a season where anything goes. Because our customers are always craving something new, the green we have been seeing as a color — and there really are beautiful shades of it — has morphed into a mind-set. Renewable ideas and the evergreen nature of men’s wear were perfectly captured in Etro’s show. There is an air of celebration, between the phenomenally pleasant weather and the anniversaries of Ermenegildo Zegna, Dolce & Gabbana and Brioni. They outdid themselves. Prada gave us a new way to look at shorts, shoes and bold color. Gucci really has the jet-set thing down. The shows for Bottega Veneta, Burberry Prorsum and Neil Barrett each had a distinct and cool take on tough luxe.”

Richard Johnson, men’s wear buying manager, Harvey Nichols: “We are increasing our budget in the single digits. Burberry, the best show this season, did something unexpected for the house, combining a military with a harder, more rugged biker spirit. Jil Sander’s use of colorblocking and clashing colors, while not brand new, felt very fresh. Gucci presented a solid, safe collection, with references to its heritage, but it lacked a bit of spark. In terms of trends, the continuation of separate jackets and trousers will continue for spring. We are moving away from head-to-toe tailoring. There was a lot of lightweight fabrics and fabric innovation, especially in outerwear garments that can be worn into the summer. Color definitely is a strong message, and every incarnation of color. Red and orange were the most dominant. Denim shirts and double-denim looks at Prada also looked very fresh.”

Lanita Layton, vice president and gmm, men’s and men’s footwear, Holt Renfrew: “Although it’s subtle and easy, there are really nice changes, good reasons for customers to go out and buy. There’s so much effortless chic. We’re certainly seeing a lot more in loose, easy fabrications. I haven’t seen this much silk in years. There’s a really lovely sense of proportion, with the fuller pant. Pleats are returning. There was a surprising amount of leather for spring. We’re loving the seaside colors, certainly with white, and sand colors and olive green. And it’s nice to see a move away from stripes and checks. There’s a lot more print. Some of the shows that resonated were Etro, which was absolutely beautiful; Gucci, and Ermenegildo Zegna. We think a man needs a new double-breasted sport jacket right now, if he’s buying just one piece.”

Kevin Harter, vice president of fashion direction, men’s, Bloomingdale’s: “We continued to see beautiful clothes that encompassed relaxed elegance on the runways. The designers showcased such beautiful fabrics — linens, wool-silk blends, crinkly cottons — that really elevated their collections. I thought Ferragamo and Corneliani raised the bar, providing us so many beautiful clothing options that can be worn at work or for a night out. Designers stayed true to their heritage while managing to push the envelope. The color palettes were strong. Blues in all their hues ruled this week, with Gucci doing it best, and we loved all the bright colors and energy at Dsquared. But the week belonged to Dolce & Gabbana. The designers started with such a strong, beautiful collection on the runway, even giving us the amazing Annie Lennox performance, and then came back a few days later with a fun, energetic showing of D&G.”