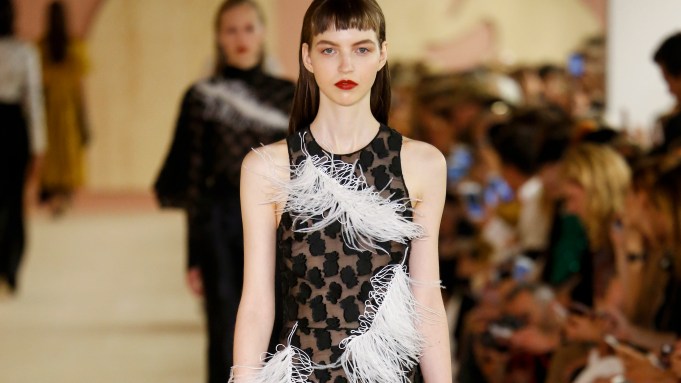 “It was a strong week for London with the major players showing beautiful collections that felt both fashion-forward yet extremely commercial,” said Helen David, chief merchant at Harrods.

“I loved the romantic spirit, the under-current of Elizabethan that we saw in many of the shows. I love how British designers really pulled from their U.K. heritage,” he said, adding there was a “continuation of Victorian flair.”

He said Erdem and Simone Rocha were particular highlights. “Erdem just continues season after season to get better and better. I am an enormous fan of Simone Rocha and I think it was probably my favorite show of her career. I love how those clothes have such a voice, and that the customer understands how to interpret them in their own style.”

Linda Fargo, director of women’s fashion at Bergdorf Goodman, pointed to some of the big trends.

“London being London, there were some great modern takes on English historical references. Interesting takes on shirting, denim and the trench as seen on the street and on attendees indicate no end to these great basics.”

She added there were some threads of trends and continuity from last season, such as “feminine romanticism” that manifested in all the ruffles, lace, dramatic shoulders and longer lengths. She also noted the “artistic, asymmetric deconstructed dressing” at Preen and Christopher Kane.

Fargo gave kudos to Burberry’s seasonless show and see-now-buy-now efforts held at Makers House, a former bookstore the brand temporarily transformed for the show and a series of craft-based events this month.

“Loud applause to Burberry for their complex effort to actualize the show-now-buy-now conversation with their appealing unisex Orlando collection, which was also wonderfully staged,” Fargo said.

David also had things to say about the brand. “This season was all about Burberry, who spearheaded the runway to retail element and kept things fresh by changing their fashion show venue to Makers House,” she said, noting that the collection went live in-store and online at Harrods within half an hour of the show hitting the runway.

“This was an exciting development both for us and our customers,” said David, adding that London has been coming into its own over the last few seasons.

She described Roksanda as “an absolutely stunning show with the sophistication and fluidity of her designs really making her collection a standout in the season thus far.”

Among the trends David pointed to were feminine silhouettes and prints, as seen at Erdem, Roksanda, Peter Pilotto and Mary Katrantzou; maxidresses at Roksanda, Katrantzou and Erdem, and romance at Burberry.

Downing called Burberry’s statement “bold” and said the men’s wear was particularly strong. He also liked the craftsmanship installation at the show venue, with men and women demonstrating how the fabrics were woven and the embroideries made.

“It really brought a sense of humanity to the clothes as you watched them walk the runway. I thought it was a really brilliant exercise in reminding us of the individuals behind the clothes. I applaud them for doing that, and for showing in season because I do believe it’s the future.”

“The energy of fashion week, that was exemplified by the designers, it was really top-notch,” Patel said. “And you could see the brands really wanted to put London Fashion Week on the map. Looking at these designers that we’ve been watching for the last decade really come into their own and becoming the new establishment. No longer the young designers and no longer the young guard, but really the new establishment of London Fashion Week. J.W. Anderson, Erdem, Simone Rocha, Mary Katrantzou, Peter Pilotto and Roksanda were some of my favorites this week.”

Regarding emerging talent, Patel credited Roberta Einer and NewGen. “We had a new designer showcase at Saks Fifth Avenue a few months ago, and we were really excited about Roberta Einer’s collection,” Patel said. “She’s being picked up for the store. And I thought that NewGen really had a lot of promising new names that I wasn’t necessarily aware of before, that were brought to my attention.”

Anita Barr, group fashion buying director at Harvey Nichols, believes that Roksanda stole the week, pointing to the designer’s “softer silhouettes with a sporty edge in fluid fabrications, perfect for summer and complemented by the soft blush and caramel tones.”

But her biggest takeaway was Christopher Kane’s shocking move to put Crocs on models’ feet. “He had us asking, ‘Are Crocs back?’”

Barr called the spring season “a colorful spectacle,” with yellow the single strongest color, as seen at Pilotto, J.W. Anderson, Marques’Almeida and Preen by Thornton Bregazzi. Pink and red were key color combinations championed by Preen and Roksanda.

“Metallics are still a strong element and consumers can invest in pieces this season to carry them through, look to Versus Versace and Christopher Kane for inspiration,” Barr said.

Barr said she liked Temperley’s “great halter neck pieces with a Seventies vibe that would work perfectly for the party season now and will see them through the summer ahead.”

Scott Tepper, fashion buying and merchandising director at Liberty, said the retailer is having its strongest season, with a large contingent of British designers, “even brands we once considered more ‘image’ than commercial.”

He said that while budgets are flexible, based on what the buyers see in the showrooms, the store will most likely put “healthy increases into our favorites.”

Tepper’s favorites included Katrantzou, “who wins the award for most exuberant, while Christopher Kane wins the prize for the most sexy.”

He said J.W. Anderson was the coolest brand on show, “but this time with more supremely wearable pieces than ever, and Roksanda wins for prettiest.”

Tepper called Burberry “an elegant, magical experience. You just can’t imagine how they could have executed the event any better. It will truly be a game changer if it all carries through into sales.”

Natalie Kingham, buying director at Matchesfashion.com, said her standout shows included Erdem and J.W.Anderson for its dresses “and for pushing a new modernity.”

Kingham called the week “strong and varied. From Simone Rocha to Ashish, British designers feel the most subversive.”

Coco Chan, head of women’s ready-to-wear and accessories at Stylebop.com, said London has always been “the hotbed of true creativity” and this season designers didn’t disappoint.

She touted Ryan Lo as one of the emerging designers and noted to the longevity of designers such as Kane and Henry Holland.

Some of the strongest trends were ruffles and frills at Preen and Mulberry, she said, as well as “the succession of [multicolor] maxi styles that closed Peter Pilotto, and Roksanda’s continued exploration of volume in a beautiful spring outing.”

While she would not comment specifically on budgets, Chan said they are based on past brand performance, adding that over the last few years the London collections have “performed consistently well with our customer base, particularly with runway pieces. That will definitely be reflected in the spring 2017 budget.”

A company spokesperson for Mytheresa.com said all the collections had “a really upbeat and positive feel to them,” pointing to trends including sheer layers, cutouts, volume, layers, mixed pattern patches and interesting fabric mixes. While praising established designers like Kane, the spokesperson also pointed to emerging designer Molly Goddard was noted as “definitely one to watch.”

Sarah Rutson, vice president of global buying at Net-a-porter, said the biggest trends for her were elements of Victoriana, shine, deconstruction and asymmetrical shapes.

Most of all, she said she’s impressed with how the London designers are evolving. “We have established businesses with many of the designers that only a few seasons ago would still be considered as emerging talents,” Rutson said.

“These designers are now in a position where they know what is working for their businesses and are very successfully marrying their creativity with commercial awareness.”