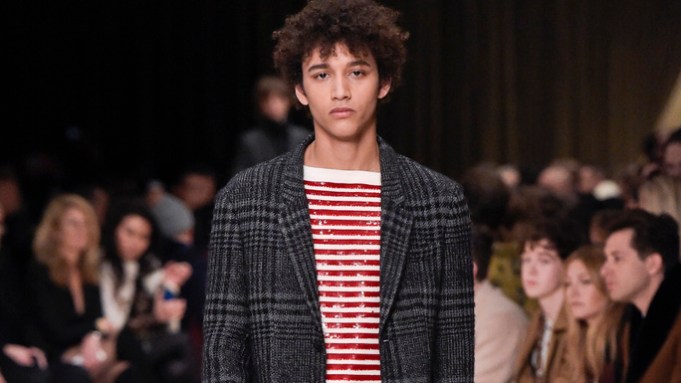 LONDON — The city’s men’s wear outing for fall 2016 won kudos from buyers on both sides of the Atlantic for its polish, professionalism and skill in blending the old with the new.

“London is full of clever dichotomies: A strong utility/workwear influence on the one hand and a whimsical gender-fluid influence on the other; an energetic, colorful street vibe, and a traditional classic tailored vibe on the other,” said Eric Jennings, vice president and men’s fashion director at Saks Fifth Avenue.

He said Christopher Bailey, Burberry’s chief creative and chief executive officer, did a “stellar job of combining all of this by seamlessly, intertwining classic vintage trenchcoats with colorful sequined track suits and sportive trainers.”

He added that it was “poignant” to be in London with so many David Bowie references from the Seventies and Eighties, “well before we learned of his passing. His indelible influence on fashion will most certainly be felt this season,” added Jennings.

Bruce Pask, men’s fashion director at Bergdorf Goodman, called London “a fascinating market” given the country’s tradition and importance in the continuing history of men’s wear.

“It’s exciting to see proven heritage brands evolve while also watching the emergence of new, vibrant labels with points of view that derive from the street and youth culture. Made in England still means a lot to a Goodman’s customer, and we are glad to be in business with some very gifted local talent.”

He pointed to Gieves & Hawkes and its “very relaxed weekend wardrobe of luxurious pieces, like great shearlings and chunky cashmere sweaters,” and to Alexander McQueen’s “opulent, regal collection that touched on the very vibrant evening wear category in an original way while also delivering some fantastic regimental jackets and coats.”

As for the young talent, Pask credited Craig Green for creating a “very singular vision in a very short time” and pointed to Thom Sweeney’s “very relaxed, modern take on British tailoring with a younger, sexy feel that was very fresh.”

He added that the showcase, overall, was a success: “The organization of LC:M, in the care of the BFC, sets a very high bar with venues that are convenient and well designed, on a schedule that is well thought out. It’s a great platform for the country’s varied men’s wear resources and there was a bounty of inspiration,” Pask said.

Jo Harris, general merchandising manager of men’s wear at Harrods, said the big brands in particular delivered this season. She pointed to Alexander McQueen’s “drama and the reinvention of styles that are iconic to the brand,” and to Coach “for the incredibly wearable designs that have a fun, novel spin — dinosaur knit, rocket motifs.”

She said it was interesting to see Burberry “pull back and create a show that was more stripped back and intimate.” She said, overall, there was often less of a distinction between formal wear and casual wear, with brands blurring the lines between both, most notably at Burberry.

Harris said among the big trends to emerge were Nineties nostalgia at Burberry, Moschino and Paul Smith; checks and plaid at Coach and Gieves & Hawkes; novelty at Christopher Kane and Christopher Raeburn, and florals at McQueen and Moschino.

“I think that Grace Wales Bonner set a beautiful mood via the music, and really pushed her designs in a way that meant they had a lot of catwalk presence and you could really appreciate all of the detail,” he said, adding that J.W. Anderson also delivered a stellar show.

“It was unexpected, fresh and further showcased the uniqueness of Jonathan’s vision. Over the past few seasons the commercial collection has also grown from strength to strength so I’m really looking forward to seeing how the core ideas translate into non-runway pieces when in the showroom,” Cassidy said.

He also noticed the London designers distancing themselves from shorter lengths and embracing longer ones. “It seems that designers moved away in general from bomber jackets, and that overcoats and parkas were more popular.”

Darren Skey, head of men’s wear buying at Harvey Nichols, said the biggest trends that emerged were wide-leg pants/flares; tactile materials such as velvet and corduroy, and a move away from structured into soft tailoring, as seen at Richard James.

He also pointed to patchwork, placement pockets and less streetwear, “which has been so strong in previous seasons.” He said the 1205 collection by Paula Gerbase was the most cohesive at LC:M. “The fabrication and silhouettes were bang on trend,” he said.

Cook had confirmed even before the shows that budgets would be up for fall — and he did not change his mind. “Browns has always supported British designers. I increased the budget for the London men’s designers last season, and I’ll be doing so again this season. I do think that we need to be offering British designers and need to add more into the mix,” he said.

“I thought the MAN show this season was exceptional — particularly Wales Bonner and Charles Jeffrey, who had two of the most impactful shows of the week. They are exactly what we want from London — bold, dynamic and idiosyncratic,” he said.

Some of the biggest trends, he said, were retro zip-tops, which he “loved at Burberry;” and wider trousers, “which continue to feel like the most modern cut.” He believes “there’s still a grungier, more bohemian spirit in the air. We saw the influence of Alessandro Michele’s Gucci at many of the shows.”

While he would not comment specifically on budgets, he did say the store “continues to see a really encouraging response to our London designers, and our men’s department on the whole continues to grow at a very strong rate. I’m leaving London feeling optimistic — it’s always reassuring to see so much creativity and energy and it was a great start to the show marathon,” he said.