Buyers focused on smaller and emerging brands — and said the city was full of innovation and fresh ideas. 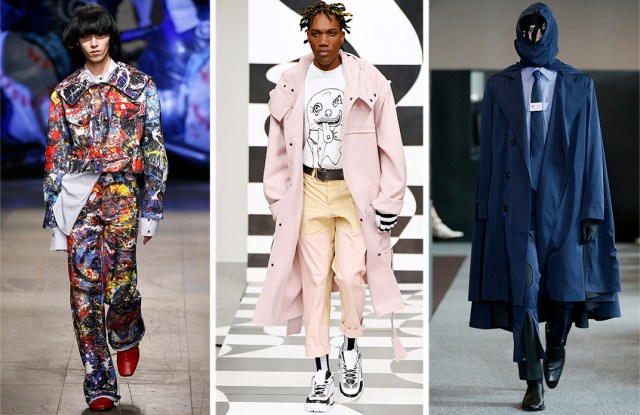 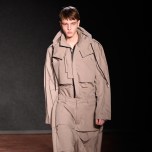 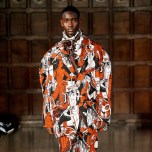 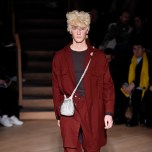 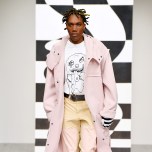 LONDON — London Fashion Week Men’s may have only been three days this season, and missing some big names such as J.W. Anderson, but that didn’t take the shine off the showcase. Instead, buyers focused on smaller and emerging brands — and said the city was full of innovation and fresh ideas.

Jack Cassidy, men’s wear buying manager at Selfridges, said “London will always be a relevant city because of its dedication to supporting young talent. The great men’s wear talent that has come from London in the last five years, from J.W. Anderson to Craig Green, is a testament to the week’s relevance and importance.”

Stavros Karelis, buying director at Machine-A, said the week’s main focus has been on emerging designers, who have “in such a short period of time since graduating turned into serious businesses, establishing their names and staying true and focused to their origins of their brands.”

David Aquilina, head of men’s wear buying at Harvey Nichols, said LFWM also sets the tone “for what’s to come for the men’s fashion week season. London, now more than ever, is a fantastic platform for new brands,” he said. “We are giving future talent the opportunity to showcase their products at this level.”

Here, a roundup of the London highlights from the retailers:

FAVORITE COLLECTIONS: Craig Green’s abstract take on a youthful daydream of flight was extraordinary and moving. He continues to be creatively expansive season after season while continuing to solidify his very clear and recognizable aesthetic. Charles Jeffrey Loverboy created a thrilling and provocative show while Grace Wales Bonner’s precise tailoring and subtle, insightful take on maritime and cultural references made for a poetic, memorable show.

TREND SPOTTING: Not really a trend, but a theme carrying through the London collections was creativity, originality and novelty — this spirit was in abundance here. Obviously, athletic influences continue as a through line in men’s wear and each season has its update, with high-tech properties and performance the story this season.

WEATHER DRAMA: I was lucky to have been booked on a Friday evening flight out of New York so snow and grounded air traffic had been cleared by then. Was very glad to be here for the start of LFWM.

TREND SPOTTING: Exaggerated prints, detailing on the back of garments as seen at Alex Mullins and Craig Green, cargo pants and pocket detailing.

WEATHER DRAMA: No problem for me. I live in Canada where it often dips as low as minus 17.

FAVORITE COLLECTIONS: Xander Zhou’s show was one of my favorite ones embracing his couture and presenting it in a fashion context, which makes him so relevant and current. Similarly, Kiko Kostadinov did one of the most exceptional shows this season, developing his initial take on workwear, utilitarian and uniform into beautiful constructed men’s wear with so detailed work. Same applies to Charles Jeffrey, who brought this unbelievable energy of creativity and talent on a catwalk, and looking specifically at his clothes, they were so elevated and beautifully made. Finally, Craig Green’s show is always one of the biggest highlights of LFWM as he has proven to be one of the most serious designers of his generation with an artistic mind that will always deliver top collections that customers love to shop and wear.

TREND SPOTTING: What is that there isn’t trends that these designers follow, but LFWM has become a celebration of individuality, diversity and uniqueness as every designer follows their own path and creates their own trends and identity.

TALENT SCOUTING: Art School and Stephan Cooke of Man were absolutely fantastic, having the seal of approval of a pioneer on the men’s fashion week Lulu Kennedy. Finally, Per Götesson is definitely someone to watch as he brings this unique take on shapes, denim and knitwear.

WEATHER DRAMA: I was pleased to see that this didn’t effect international buyers and press and managed to travel and be part of LFWM. This proves that London has taken its very well-deserved place in the international calendar of the most important fashion weeks worldwide. It’s not only about big brands but is mainly a celebration of emerging talent and London is the best place for this.

FAVORITE COLLECTIONS: Craig Green was great as he continues to demonstrate his signature aesthetic, definitely a highlight for the weekend. His use of color, tone, texture and graphic pattern to tell a story is superb. It was also really great to see Blood Brother hold their first runway show. A great example of how LFWM can really catapult a brand, as just a few years ago the brand was showcasing from a rail within the LCM designer showrooms.

TREND SPOTTING: At this point, the trends are quite broad. What we have gravitated toward are the great use of color and texture from the likes of Oliver Spencer and Nicholas Daley, for instance; bolder patterns and prints from Wales Bonner and Craig Green while the solid sense of British masculinity from Kent & Curwen and Belstaff will make for a great looking store come fall 2018. The accessory collaborations have also been fantastic this season from Liam Hodges x Fila, to Cottweiler x Mulberry and Astrid Andersen x Nike.

TALENT SCOUTING: There seemed to be a dramatic reduction in brands within the designer showrooms, so not a lot of newness was spotted at that level. In contrast, the schedule is full of relatively new brands such as Cottweiler, Liam Hodges and Nicholas Daley which we will definitely be keeping an eye on.

FAVORITE COLLECTIONS: I have to say that Charles Jeffrey Loverboy was brilliant — if you take all of the elements individually, well it could have been all a bit distracting — performance art, dance, drumming, a catwalk show — and yet on a bitterly cold Sunday night when you could forgive even the hardiest of feeling jaded it makes for an amazing spectacle and lifted the show to another level. I knew it would be special but it still took me by surprise. But alongside this “moment” both Grace Wales Bonner and Craig Green showed beautiful collections moving forward their vision without any compromise and that is unique to each.

TREND SPOTTING: It’s really too early to say though I was intrigued by the fabrications and treatments at Cottweiler. I can’t wait to see these up close in the showroom. I’d also note that large sections of shows and presentations had the models in sneakers, and conversely we have also seen the reemergence of the leather shoe — a return to proper shoes.

FAVORITE COLLECTIONS: Edward Crutchley’s use of volume and prints once again was amazing. We loved his carpet coats and silk pajamas. Liam Hodges took a slightly different direction but continued to stand out with his mix of Nineties grunge and club kids. We also loved his introduction of tailoring — he just continues to impress. Kiko Kostadinov put on one of the best shows in terms of production — it was mind-blowing. The setting and music gave it a real atmosphere and we loved his introduction of colorful sportswear.

TREND SPOTTING: Tailoring definitely seems to be making a comeback for fall 2018 and not necessarily in a conventional way. Masculinity is making a resurgence and we noticed there was definitely more suiting on the runway compared to previous seasons. There was also a significant change in the color palette from last season, as brands seem to be moving away from black and pastels and are leaning more toward washed autumnal colors.

TREND SPOTTING: After seasons of oversize pieces dominating the men’s shows, the silhouette was brought closer to the body this season. Tailoring was also given a 2018 update with the likes of Liam Hodges and Charles Jeffrey presenting their own interpretation of suiting.

TALENT SCOUTING: Without a doubt it’s been Charles Jeffrey’s Loverboy, which took place in the Old Selfridges Hotel. Every season, Charles takes you into his world with a truly immersive experience, and this season was no different.

FAVORITE COLLECTIONS: Blood Brother for their retro nostalgia with high-waisted cords, graphic slogan jumpers and a few Eighties power jackets thrown in. I was also very impressed by Edward Crutchley. The collection was beautifully elegant and based around a canvas of luxurious silks, velvets, jacquards, embroidery in earthy tones.

TREND SPOTTING: The Streetwear trend has held firm again for Fall 2018 but alongside this, a more sombre, gothic style that we haven’t seen for some time has made an appearance. Decades past also had a big influence. From Seventies dandyism with wide legged trousers and suiting to the Eighties/Nineties rave era with track pants, puffer jackets and cross body accessories.

TALENT SCOUTING: London provides a key platform for new designers and it was great to see the development of emerging designers carving a place for themselves at London Fashion Week Men’s.