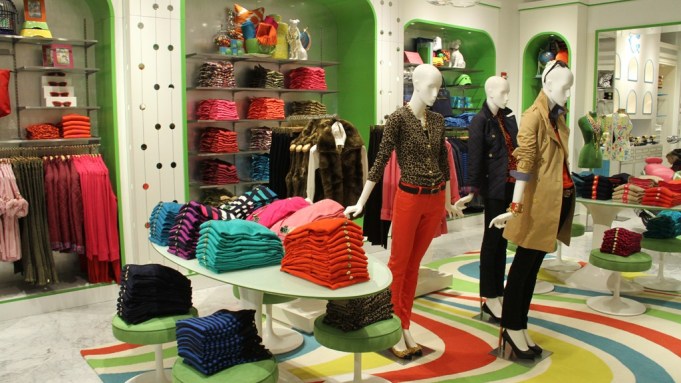 NEW YORK — C. Wonder’s second Manhattan store is like the original SoHo unit on steroids. Now it wants to take its act overseas.

The 8,000-square-foot space, which opens Friday at the Shops at Columbus Circle at Time Warner Center, has more color and more props — including life-size multicolored striped zebras, polka-dot horses and six-foot logo teddy bears. There’s even an illuminated portal at the entrance with LED lights projecting the brand’s proprietary print.

“We created a lot more whimsical energy,” said J. Christopher Burch, founder and chief executive officer of Burch Creative Capital. “We’ve taken a much more fun approach to the world of C. Wonder. It’s become a place that makes you smile. In the old stores, customers loved the elegance and quality of our fixtures. We want people to have a great time, too. It’s a totally different electric energy. Every one of our stores needs to be different. If I could buy a submarine that’s safe, I’d put it in one of the stores.”

The store is divided into themed rooms. Burch’s favorite is the new “disco room,” with a wavy rug in Twister colors, grass green and white plastic stools and lights inspired by disco balls. “It has a psychedelic modern Sixties swirly theme to it,” he said. “We have a Moroccan room, a hacienda room and an English country house.”

Burch revealed that C. Wonder will enter its first international markets at the end of next year. “We’re meeting in Germany, Japan, Australia, Europe and South America,” he said. “In Europe, we’d enter Germany first. We’re deciding where we want to go first in Asia. All my businesses are global. That’s crucial to all of our brands. We’ve seen more acceptance of U.S. brands internationally.”

In the U.S., C. Wonder could ultimately open about 110 stores. Worldwide, the brand could have 300 to 350 units. “We’re looking at shops-in-shop,” he said. “The retailer has to buy into our total concept.”

Burch expects all of his nine brands to go global. Monika Chiang will open three to five locations this year, Electric Love Army will launch in the summer, along with 9 Christopher Street.

While Burch amped up the fun quotient of the store with bowls of candy, a gum-ball machine and mannequins holding gigantic balloons, he’s also focused on raising the quality of the products. “We introduced a 100 percent silk blouse, for $128 for prints and $98 for solid,” said Amy Shecter, president of C. Wonder. “We were using fabric blends before. We added a layer of about 15 percent premium product, such as cashmere, saffiano leather and hair calf.” A pink saffiano-leather clutch that converts to a shoulder bag is $148; a black calf-hair and leather handbag, $248.

Shecter said the biggest surprise for the company was consumer acceptance of C. Wonder apparel. A new category of dressier items includes a raincoat, $248, and sweaters embellished with rhinestones, $98. “We think this will bring in a slightly more sophisticated customer,” Shecter said. “We had her buying home products, now she’s buying rtw.”

The new store is C. Wonder’s seventh and will be the “largest-volume unit in the company,” Burch said. Plans are to open three units in 2012 — at Tysons Corner in McLean, Va., the Fashion Valley Mall in San Diego, Calif., and the King of Prussia Mall in King of Prussia, Pa. “Next year, we will open 30 to 50 stores,” Burch said. In mid-October, a holiday pop-up store will bow at Fifth Avenue and 21st Street in the Flatiron District. In the spring, the location will be converted to a permanent store.