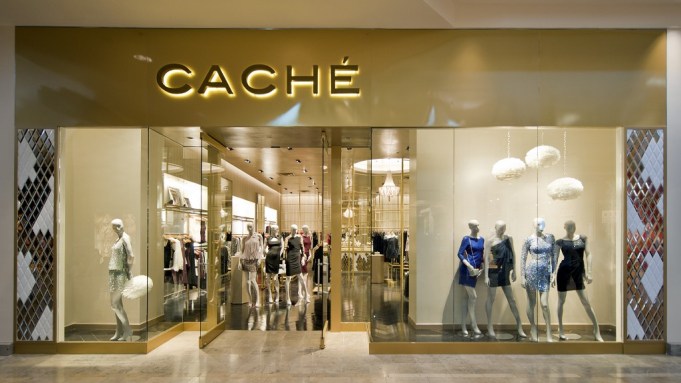 Jay Margolis is putting his stamp on Caché Inc. with a new store concept unveiled Monday at the Fashion Show Mall in Las Vegas. Developed with Kramer Design Group, the 2,800-square-foot store will serve as a template for remodels and future locations and is intended to broadcast that Caché is a sophisticated yet approachable resource for special-occasion dressing.

“We think we are the event in a woman’s life before she goes to an event,” said Margolis, who in February was named chairman and chief executive officer of the New York-based specialty-store chain with 250 units, primarily in malls. “There is a white space for a little place to discover new things, that’s what Caché was when it was a great place, and we want to bring that back.”

Key elements of the new store concept are a circular gilded birdcage where dresses are hung, chandeliers and roomy dressing rooms with silk-lined walls, upholstered sofas and drapes that have a translucent quality. Gold, silver and leather are prominent throughout the store, and there are high ceilings and 12- to 14-foot-tall mirrors to enhance the store’s spaciousness and allow customers to view merchandise clearly.

“The store really has a very intimate and luxurious feel to it. The tone is set by the gold and bronze that give it a sense of warmth,” said Arnie Cohen, chief marketing officer of Caché. “Our fitting rooms are large and luxurious. It just sets a higher level of expectation.”

Margolis was especially interested in improving the shopping experience by elevating the fitting rooms, which are sizable enough for two people to try on clothes together and chat about what they want to buy.

The concept marks the first time that Caché has an updated logo on its facade, with straighter, bolder letters than the previous logo, which was used for more than 30 years. “We modernized it, but in a way where she [the customer] will feel comfortable and she will still recognize it. I think it will naturally fit into the evolution of the business,” said Cohen.

Despite all the changes, dresses remain the stars of the Caché store. During the retailer’s second-quarter conference call, Margolis set a goal of having dresses make up 50 percent of Caché’s assortment, up from 20 percent in the second quarter. In the second quarter ended June 29, Caché’s net sales decreased 2.5 percent to $61.6 million, and its gross profit dipped 20 percent to $20.9 million. Net losses totaled $3.2 million. Same-store sales rose 0.5 percent, compared to an increase of 4.7 percent in the like quarter a year earlier.

To help right the ship at Caché, Margolis has made a slew of hires. Among them are Cohen; Daphne Pappas, formerly vice president, general merchandising manager for Burberry Americas, as executive vice president, chief merchandise officer, and Anthony DiPippa, who previously held finance positions at W.B. Mason, Godiva Chocolatier, Dun and Bradstreet and Procter & Gamble, as chief financial officer.

Margolis indicated that the concept introduced in Las Vegas would be rolled out to other Caché locations, but he wouldn’t specify the exact locations or the number of them. “The store is a reflection of where we want to go. A lot of people have joined on this mission that are feeling good about this white space and how we can be a different shop in a mall and with street locations as well,” said Margolis.