Ilex hopes to get sales bubbling with the new Ageless Bath Collection. 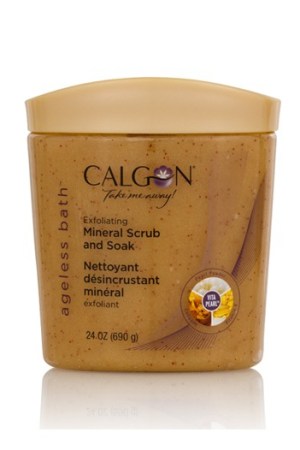 This iconic slogan delivered instant recognition to the bath gel. But despite the fact many women daily uttered the words, “Calgon Take Me Away,” the brand was facing elimination from the retail landscape.

Calgon’s new owner Ilex hopes to get sales bubbling with mass market versions of products made popular at Bath & Body Works or Victoria’s Secret. Ilex also is bringing a new aspect to the bath category — antiaging.

“Calgon has incredible brand awareness. We have to relaunch it, make it more relevant and get the price-value equation realigned and get on trend,” said Bernie Kropfelder, executive vice president of marketing and sales of Ilex Consumer Products Group.

The timing appears to be good with the bath category starting to expand after several years of declines. Symphony/IRI data for the 52-week period, ended March 20, shows category sales across food, drug and mass gained 3.7 percent to almost $60 million (excluding Wal-Mart and only in fragrance bath and bubble bath).

Currently shipping into drug, food and mass doors is the Ageless Bath Collection, which includes Ageless Bath, Bath Pearls, Bath Body Scrub and Soak and Milk Bath with Serum Beads. The products build on the new packaging, logo and items introduced as part of the overall brand restage late last year. These products have Vita-Pearl technology, a blend of vitamin E, pearl powder and collagen, which is said to help provide antioxidant protection, luminosity and dryness relief.

The antiaging collection attracts mature consumers, while the Sensual Collection appeals to young shoppers who have migrated to the specialty stores for bath items and fragrances. The Sensual Collection includes Sexy Fragrance Mists, Shimmering Moisture Mists, Silkening Double Mist and Swirl Luminous Body Cream. The products are available in three fragrances, Flirty Tease, Femme Inferno and Angelic Kiss. “We wanted to give them an affordable and luxurious collection that makes them smell and feel sexy,” said Kropfelder. “For us, we really saw an opportunity where in this economy people can’t afford $29 for a body lotion. We really wanted to address the price-value segment and give upgraded value and at the same time make a relevant brand.” Retailers agreed that the key to getting sales back is to have products that can rival the assortments at Bath & Body Works.

Calgon is still carried by mass market chains, including Wal-Mart, Rite Aid, Dollar General, Kmart, Target and Kroger, but there were fears if the brand didn’t get updated it could be edited from the assortment in the future.

Enter Ilex, which assumed Calgon from Ascendia Brands in 2008. Ascendia had purchased Calgon and the Healing Garden from Coty Inc. for $125 million in 2007 with plans of turning it into a $5 billion business by 2010. Although Calgon had the history, Ascendia put its bucks behind the restaging of The Healing Garden. Ascendia filed for bankruptcy in 2008 and Ilex got the brands.

Ilex quickly saw the reputation Calgon still had and decided to pump product innovation and marketing into the 65-year-old year old name. The firm, however, isn’t ruling out trying to rebirth The Healing Garden at some point.

Among physical changes were adding a flower to the “o” in Calgon and enriching the formulations. Ilex wants to keep the brand exciting and ever-changing. “We want to introduce new fragrances to get people exited. We looked at what was missing and added Vanilla Passion. There wasn’t a gourmand flavor,” he added.

Ilex also is kicking up interactive marketing by posting videos of consumers raving about the brands on sites such as Facebook. There also is more couponing to get shoppers back into the category. Ilex is working with retailers to create more impact at the store with upgraded fixtures for specialty bath areas. The idea is to “interrupt” shoppers with displays and new products so they know they aren’t seeing the same old things, according to Ilex executives. There are also customized displays that work well in smaller chains or in channels which can’t accommodate huge bath departments.