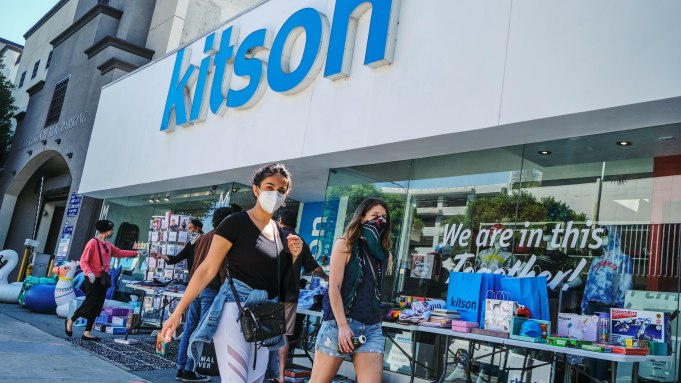 Retail is slowly waking up.

Following the go-ahead from L.A. Mayor Eric Garcetti on Thursday, clothing stores began reopening on Friday for curbside pickup only.

Under phase two of the city’s reopening plan, “nonessential” businesses such as bookstores, florists, toy stores, sporting-goods shops and music shops were also able to fulfill orders directly from customers — at least from the sidewalk.

Select department stores, including Kohl’s and Macy’s, were open for curbside pickup, though malls were not. In Beverly Hills, Saks Fifth Avenue was set up for sales and returns, with an average of 60 cars coming through each day. (The store currently has more than two dozen stores open for curbside shopping nationwide.) Customers pulled up to the valet entrance of the store, where a table with hand sanitizer was set up, and salespeople wearing masks, and armed with inventory-tracking iPads, were stationed and available to fetch items from inside for customers to look at. Handbags and beauty items were of interest and a couple of customers even asked if they could go inside the store. A few blocks down, Neiman Marcus had a similar set-up, but looked much quieter. And on Rodeo Drive, Tom Ford was open for curbside pick-up starting Monday.

On the West Side, the upscale Brentwood Country Mart was also open for curbside pickup starting Friday. The open-air shopping center’s owner, James Rosenfield, had a fleet of runners at the ready to deliver oat milk lattes from FarmShop, and stamps from the onsite Post Office. His Marin Country Mart in Northern California was also open for curbside pickups over the weekend, when flowers from Hudson Grace were popular with the Mother’s Day shopping crowd, Rosenfield said. “Getting back to business is what we all want to do and it’s fun if we can do it safely,” he added, noting that fashion stores, including Dôen and Capitol, will be opening for curbside pickup this week.

Rosenfield, who is known for his nostalgic, community-centered approach to retail and his curated tenant mix, added an incentive for families to come back to his centers: collectible toy animal figurines for kids. “I’m old enough to remember as a kid going to service stations and getting a little toy that was part of a collection…and you beg your mom to go because you are missing the rhino or elephant. If there is a kid in the car, and you drive up and buy something at one of our centers, now they get a toy. We’re serving the customer in that way.”

He’s also planning to use the centers’ ample parking lots for drive-in family movie nights, where customers can get contactless shopping and food delivery to their cars while they are enjoying a film, and potentially for outdoor SoulCycle classes. “We have to do the best we can as landlords to help our tenants because we love them and we took a long time to find them,” added Rosenfield, who has offered rent relief for his tenants.

Multilabel boutique owner Elyse Walker reopened her namesake store and her Towne stores for curbside pickup, reporting that Mother’s Day gifts, including handbags and jewelry, were what was selling over the weekend. Using the stores’ Memo service, shoppers were able to work with in-store stylists to have boxes of product customized for pickup. “The most challenging aspect is adjusting to new forms of client engagement,” said Walker. “For years, we have been used to our clients just walking in the door, often multiple times per week. Those relationships have evolved into friendships so now it’s just about finding new ways to connect and engage — but making sure that we are doing so in a meaningful way.”

L.A. designer Clare Vivier opened three of her four area stores on Saturday and Sunday, scrambling as best as she could to get inventory back onto the shelves in the 48 hours after the mayor made his announcement. “I wouldn’t say it was as good as a normal Mother’s Day would have been, unfortunately, but we were encouraged by our customers — we sent out an e-mail and posted on social media. People were excited to be back in the world again.”

Most customers called ahead and gave their credit card numbers, she said, and if they wanted to touch or feel a bag, for example, they were asked to use hand sanitizer beforehand. Vivier has seen an uptick in her apparel sales since the pandemic, but sold apparel and accessories equally over the weekend, including her own branded face masks. “Even this limited contact, people were so happy to have — just a little normalcy.” She plans to open her West Hollywood store starting Wednesday. “We’re just going to play it by ear,” the designer said of her approach to reopening.

On Robertson Boulevard, Fraser Ross put some of his merchandise on the sidewalk, including pool floats and racks of Mother’s Day cards. “It was the best I could do without holding stuff up to the window,” he said, noting that robes, pajamas, slippers and cards sold well, but that his sales were only about 15 percent of what they would be on a normal day. “It was better than nothing…But hopefully by Friday, things will loosen up a little more and we can let people into the store two at a time for five minutes each. We have to get the city back open — safely.”

Sweats by Aviator Nation have been a hot seller, he added, “And I sold a cashmere sweater that says, ‘Meet Me in Beverly Hills.’ I don’t know who’s meeting in Beverly Hills right now, but who knows?”