Digital technology is used throughout both stores. 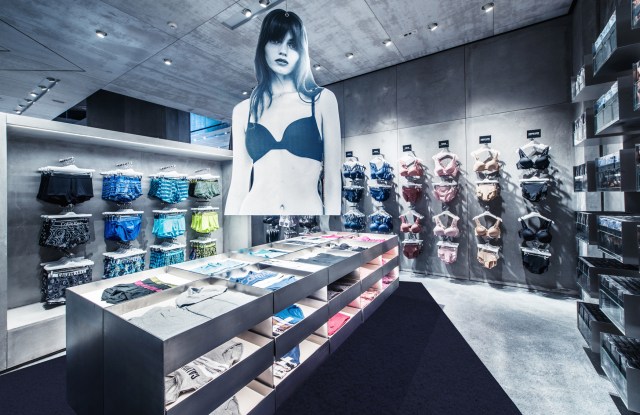 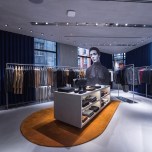 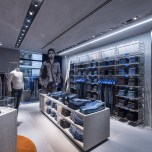 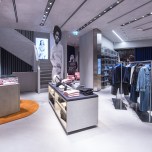 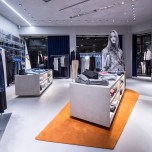 China and Germany are getting a bigger bite of the Calvin Klein lifestyle.

“Our new flagship stores in Shanghai and Düsseldorf represent Calvin Klein’s commitment to strong consumer experience, technological innovation and unmatched brand equity for our global audience,” said Steve Shiffman, chief executive officer of Calvin Klein Inc. “As we continue to focus on expanding Calvin Klein’s global footprint, it is our objective to bring a best-in-class retail experience to key markets and shopping destinations around the world.”

Last year Raf Simons was tapped as chief creative officer of Calvin Klein in an effort to unify all of its brands under one creative vision. Simons leads the creative direction for the company’s entire stable of brands, including ck Calvin Klein, Calvin Klein Jeans and Calvin Klein, as well as the men’s and women’s ready-to-wear collections. He also oversees all aspects of global marketing and communications, visual creative services and store design.

PVH China rents the space for the Shanghai store and PVH Europe owns and operates the Düsseldorf property. Both stores are operated by Calvin Klein Inc.

Calvin Klein has north of 900 stores in China, which are owned/operated and franchised or licensed.

As for the Shanghai and Düsseldorf stores, the design concept is communicated through the brand’s minimal, modern aesthetic with a fresh addition of color and materials to enhance the consumer experience. Vibrant cobalt blue curtains frame the entrance, while geometric-shaped rugs in soft pink are a counterpoint to the gray concrete. Kvadrat/Raf Simons fabric is used throughout as well as Utrecht chairs by Gerrit Thomas Reitveld, which are distributed by Cassina. Oversized silhouette cut-out images of models in the brand’s latest styles are suspended from the ceiling, sharing the product story of the store.

Digital technology is used throughout both stores, offering consumers the opportunity to participate in a personalized shopping experience and engage with the products. Interactive video and denim fit-guide walls allow consumers to browse items featured in the brand’s current campaign and make selections to try on in-store.

In the Shanghai location, an interactive video table invites consumers to get to know the brand on a deeper level via newspaper, magazine and online articles, key milestones, runway show videos and recent events, as well as the brand’s social media platforms.

Calvin Klein’s global retail sales of its products exceeded $8 billion in 2016 and were distributed in more than 110 countries. The brand was a strong contributor to PVH’s latest quarterly sales results.

In the last earnings call in August, Emanuel Chirico, chairman and ceo of PVH Corp., noted that Calvin Klein’s spring 2018 order book is projected to be up more than 25 percent, following an increase north of 25 percent for fall 2017. He cited the strength in the business was evident across all distribution channels from all major markets and across all product categories: jeans, underwear and accessories for both women and men. He also noted that Calvin Klein Asia continued to perform well with China outperforming other markets across all product categories.

Chirico has spoken previously about Calvin Klein’s growth prospects, and when Simons was hired as chief creative officer last year, a future with $10 billion in global sales was cited. Although it’s still early and Simons’ first collection has just hit stores, the partnership is already viewed as a boon to the overall PVH business.

“I think the excitement is building,” Chirico said. “Clearly, there’s excitement throughout the retail community with our partners and department store accounts. We think it’s going to be a major halo effect for us.”