Australian bohemian brand Camilla cruised into the U.S. with back-to-back boutiques in Florida and California, its strongest wholesale markets here. A brick-and-mortar presence has been a long-term goal since launching its dedicated e-commerce site for the U.S. in 2015. Company-owned stores in Aventura Mall and South Coast Plaza, whose blueprints match 20 locations throughout Australia, opened in April and May, respectively. The Stateside push was timed for the 15th anniversary, according to founder and designer Camilla Franks. 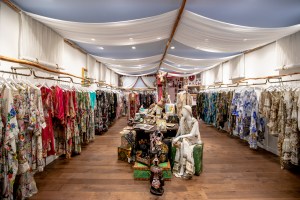 “We wanted to stamp it as a big milestone and planned our biggest business year to date,” said Franks, who also introduced a U.S. showroom in New York and aligned her marketing and public relations strategy for aggressive international growth. “Swinging the doors to our first stores was the final piece of our U.S. puzzle.”

“The customer profile and lifestyle in California and Florida resonate with the Camilla brand, particularly with its Australian roots. They love us here,” said Franks, who started the business in a beach shack in Sydney.

Its peripatetic heritage carries over to stores’ caravan concept with sheer white fabric fashioned into grand tents. Back walls display souvenirs from her global travels, while elaborate vignettes further pile on unique wallpapers, artworks and focal points such as Aventura’s vintage rickshaw from India. Though neither U.S. store falls under a flagship — e-commerce remains the broadest channel here — both offer a hefty assortment of clothing, accessories and shoes for women, men and children 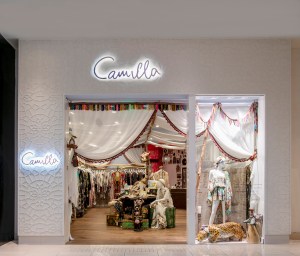 . Sales for the inaugural retail collection Stateside, spring 2019, whose themes explore her homeland’s rich diversity, have already exceeded expectations according to Franks.

Retail won’t affect established wholesale partners. In Miami, the brand is still represented in nearly every neighborhood — Big Drop in South Beach, Azul in Coconut Grove and Boheme in Key Biscayne and the Miami Design District. The New York showroom’s arrival restructured the line’s U.S. trade show circuit from Dallas and New York markets to Cabana in Miami Beach and Brand Assembly in Los Angeles. Franks funded her U.S. expansion with her own long-standing growth profits.

“This meant we got full control over our approach, and we did things our way, which for us is the only way,” she said.

Next, she plans to address Europe, Asia, the UAE and New Zealand. Franks expects newly launched e-commerce sites for the U.K. and Europe to bolster strong existing wholesale activity, which extends to the Middle East.

“Everywhere we go, the reaction to the brand is just incredible. We plan to color the world with Camilla,” she said.