The 4,000-square-foot store is located on Wooster Street. 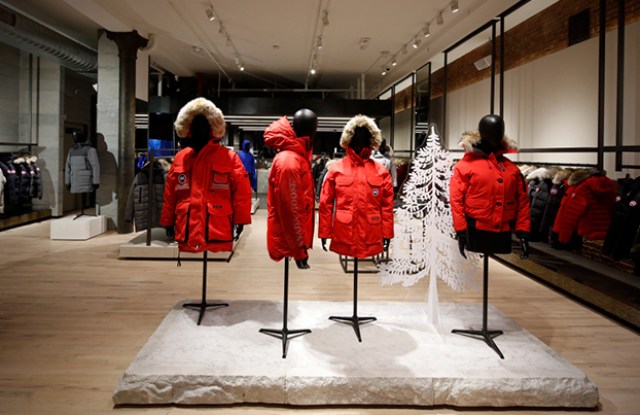 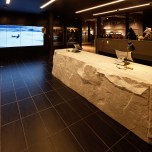 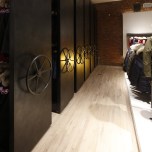 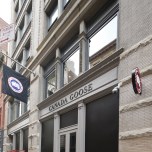 NEW YORK — Canada Goose has flown due south for the location of its first American store.

On Nov. 17, the Toronto-based outerwear brand with the rabid following, will open a 4,000-square-foot flagship at 101 Wooster Street in the heart of SoHo. The New York store follows the company’s first location at the Yorkdale Shopping Centre in Toronto that opened a few weeks ago.

Dani Reiss, president and chief executive officer and grandson of the founder of Canada Goose, said the company chose SoHo because it is “a window to the world. We’re based in Toronto and we opened our first store there about a month ago. After that, New York made the most sense. The whole world goes to New York, we have a big office there, and it’s our home away from home.”

Reiss said the Toronto unit is “doing really well, exceeding expectations.” He said there are people lined up to get in almost every day, which surprised him. “They’re even flying in from overseas to go there. We’re seeing international and local demand.”

Reiss is hoping that the SoHo store will have a similar response.

The company does not release sales figures, but revenues have increased 450 percent in the past five years as celebrities and influencers have embraced the company’s ubiquitous patch.

The SoHo store, which is in the former Patagonia space, is located across the street from Icebreaker and close to Barbour and The North Face. It will carry more than 3,500 pieces each season for men, women and children and the mix will include special collaborations, archival items and styles that are sold only in Canada Goose’s retail stores.

Only one size of every style is on the floor so as not to overwhelm the space with inventory. Instead, there is a “vault” in the rear of the store where the sales staff can access all size ranges of the jackets.

Upon entering, the men’s assortment is on the left while women’s is on the right. A rack right inside the front door features exclusives including a deep woods printed jacket, one of only four remaining pieces of the brand’s collaboration with baseball player José Bautista, and a special, lighterweight version of the Liberty jacket for women. The capsule collection with Opening Ceremony — a unisex collection centered around a paisley print that is featured on either the outer shell or inner lining — will make its debut on Nov. 17 at the store.

There are separate areas for the Black Label collection, a more updated, stylish offering and Fusion Fit, which is targeted to smaller frames.

The PBI collection, a special line which donates a portion of its proceeds to the Polar Bear International charity, is also featured in the store. Speaking of polar bears, a few soapstone-carved figurines of the creatures created by contemporary aboriginal artist Jason Carter decorate the space.

Canada Goose also crows about its history as a Canadian brand by using other Canadian companies in its store design. For example, a single piece of marble that weighs more than 4,000 pounds doubles as the reception area. It was mined from a quarry in British Columbia and left raw to evoke the glaciers and icebergs in its native country.

The brand also turned to Montauk Sofa, a furniture brand with a factory in Montreal, to create the custom furnishings in the store, including the down-filled sofa and chairs.

There is a large video screen that will show the brand’s campaign imagery and cases where archival pieces are showcased. For the opening, the Peace Keeper Parka for the Ontario Police Department and the Heli Arctic Parka for the Canadian Parks Enforcement Officers are on display. These pieces will be swapped out monthly.

Reiss said the brand has long been “an ambassador for Canada around the world and we’re the only store in New York with Canada in our name.”

In 2013, Bain Capital Private Equity bought a majority stake in the brand for an undisclosed amount. Reiss retained a significant minority interest and remained on board to continue to run the business.

Canada Goose was founded 59 years ago in a small warehouse in Toronto and is now sold in more than 50 countries. It has also become popular with the fashion crowd as evidenced by its associations with Marc Jacobs, Vetements, Opening Ceremony and others.

Reiss attributed the brand’s popularity to the fact that “we’re at the intersection of fashion and function. This is the warmest jacket you’ll ever wear, it’s very recognizable and people aspire to it.” Most of its coats sell for $800 to $1,200, slightly less for lighterweight models and slightly more for the top-of-the-line pieces that can be worn in temperatures of negative-40 degrees.

The “social viral element” is also part of it, he said. “Our relationship with Hollywood and the film industry has become an important part of pop culture. We’re lucky that there are a lot of fans of the brand — we don’t pay them to wear it.”

Despite its popularity, Reiss said there are no plans to add other stores at this time. “We’ve thought about it, but we’re focused on making these two a success,” he said.

Ditto for expansion beyond coats. “We’re an outerwear brand,” he said. “And we’ve successfully expanded from about 20 styles when I started in 1987 to 200 now.” That includes lightweight styles, hybrids, waterproof shells and a true spring collection.

“We have experience in outerwear and accessories but we’ve had conversations of where to go from there,” he said. “Whatever we do, we have to make sure it’s the best in the world. We’re not about just putting logos on products. So, eventually, you will see more from Canada Goose.”