The 10,000-square-foot unit, which bows in SoHo today, is the retailer's biggest store in the world. 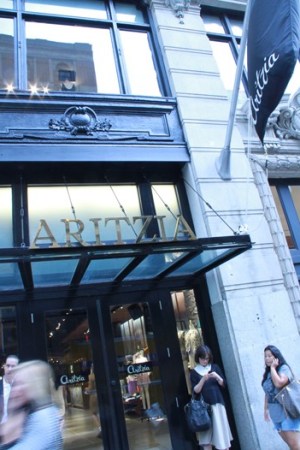 NEW YORK — Mystical symbols, a sculpture of a large wooden hand with its fingers crossed in a sign of good luck and crystals. Aritzia isn’t taking any chances with its 10,000-square-foot SoHo flagship — double the size of a typical 5,000-square-foot unit — bowing today at noon at 524 Broadway on the corner of Spring Street. It’s Aritzia’s biggest store in the world.

The Canadian retailer admitted to being a bit intimidated by Manhattan and even tested the market with a temporary store in SoHo. Sally Parrott, vice president of marketing, said the pop-up store exceeded the company’s expectations. Aritzia’s sales volume in the U.S. is $1,500 to $1,700 a square foot.

Aritzia’s flagship is designed to evoke the metaphysical world and natural phenomena such as butterflies, erupting volcanos, Niagara Falls, storms and woodland creatures. The store is a mash-up of various unrelated materials such as brick-shaped stone, mosaic tiles and burl wood.

Aritzia, which is based in Vancouver, designs several proprietary labels, including Wilfred, made with luxurious fabrics; Wilfred Free, a casual lifestyle brand; Le Fou by Wilfred, the most directional line; the modern and classic T. Babaton, and the edgy A Moveable Feast. The company claims to deliver high quality and gentler prices. For example, a leather and suede vest from Feast is $275 and a lace dress by Le Fou is $295. In addition, the retailer carries designers such as J Brand, Joie, Cynthia Vincent, Athe Vanessa Bruno and Swedish Hasbeens. Not all stores sell the same brands. Aritzia had to rethink its assortment for SoHo. Marc by Marc Jacobs accessories, a top-selling brand for the company, can’t be sold because Jacobs operates his own store on Mercer Street.

Aritzia chose Santa Clara, Calif., for its entry into the U.S. three years ago. It followed up with major cities such as Seattle, San Francisco, Chicago and Portland, Ore., that are closer in proximity to Canada to facilitate deliveries. It now has nine stores in the U.S., plus 40 in Canada. The SoHo store has up to 15 dressing rooms, including two larger ones for private shoppers. The company, which doesn’t advertise, relies on word-of-mouth. “We have an extremely loyal customer base in Canada,” she said. “We’re starting to see that in the U.S.”