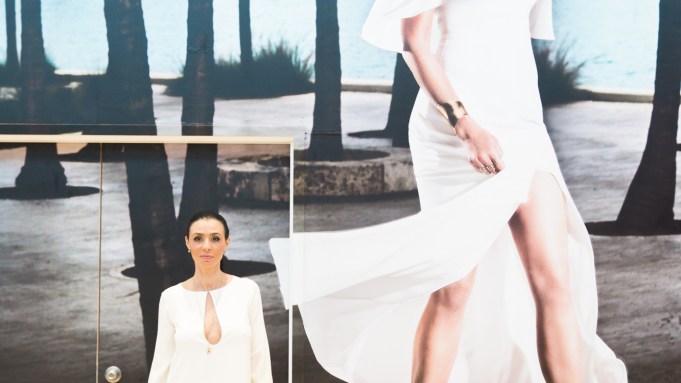 Photographer David Drebin and the daughter of actress Diahnne Abbott and Robert De Niro collaborated on a fantasy piece entitled “Summer Dreaming,” which is being exhibited within Square One’s luxury wing.

“David and I had talked for some time about working together. When this offer came our way the timing was perfect,” Drena De Niro said.

“For me this was much more than modeling clothes. You had to feel this woman’s character to make this story work and to connect it with other women looking at the final product,” De Niro said. “I also loved the fact that our heroine here is a full-fledged woman, not a girl. That really changed the game on this project.”

“We did look at other candidates for this campaign. But when we landed Drena we knew we had it,” Holley said. “Our target audience is the woman who is 25 to 50, so hiring an 18-year-old model would never have worked. Our customers wouldn’t buy it. What’s more, a girl of that age could never have conveyed the level of emotion, elegance, sophistication and power we wanted.”

The wing’s 60-foot ceilings, glass walls and sprawling white interior will also play host to Harry Rosen’s new flagship, as well as Holt Renfrew, which will launch its 130,000-square-foot store this summer.

Since 2013, Square One has been in the midst of redeveloping 2.2 million square feet at a cost of 480 million Canadian dollars, or $357 million at current exchange.

Square One has also continued to achieve record sales-per-square-foot growth. This productivity is estimated at 1,002 Canadian dollars, or $745, total sales a square foot. That figure is expected to grow with the opening of Simons on March 17.