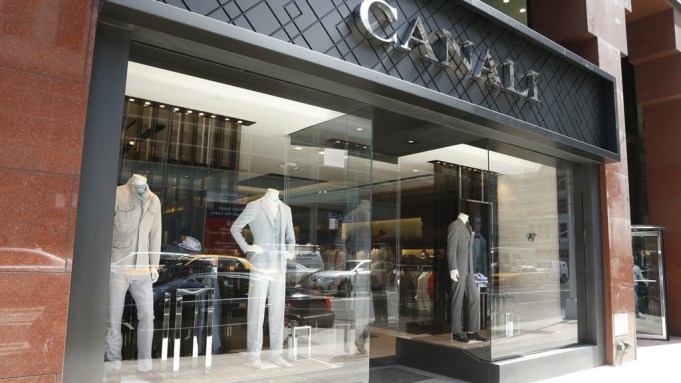 The 6,000-square-foot, two-level New York City flagship at 625 Madison Avenue between 58th and 59th streets opened quietly last weekend, joining a five-year-old unit on Broad Street downtown. The store is the first to showcase the company’s new logo, a stylized version of a needle and thread and the year of its founding, 1934. The logo also is being used on the company’s apparel labels, as well as its packaging, marketing materials and Web site.

In a walkthrough, Giorgio Canali, president of North American operations, said, “We’ve finally come to Madison Avenue. New York is our biggest market, and we felt we were missing the experience of being in the luxury shopping district.” Neighbors in the upscale neighborhood include Eton, Wolford, Bally, Stuart Weitzman and Baccarat. Although he would not provide a volume projection, he said he expects it to be “one of our top two stores.”

This is Canali’s seventh company-owned unit in the U.S. The last to open was in Bal Harbour, Fla., in July 2012. The company also operates boutiques in Coral Gables, Fla.; Rodeo Drive in Los Angeles; South Coast Plaza in Costa Mesa, Calif., and at The Palazzo in Las Vegas. All told, it has more than 200 stores and shops-in-shop around the world.

Upon entering, shoppers first see the company’s lifestyle collection of sportswear and sport coats. That’s followed by a selection of furnishings and accessories, including shoes and small leather goods. In the rear of the main floor is the company’s suit collection. The store design features gray stone, dark walnut and smoked glass. Fabric-lined display cases also help set the tone. “It creates three different atmospheres as you walk back,” Canali said.

A crystal glass elevator and a marble staircase lead downstairs, where “the finest part of the collection” is showcased, Canali said. This assortment retails for around 30 percent above the core line and includes suits in luxury fabrics. There is a separate area for made-to-measure services, as well as a VIP room. The downstairs also houses a tailor shop and a stockroom.

“This is an evolution of what we did in Bal Harbour and, prior to that, in London,” Canali said. The London unit, which opened in May 2010, also includes a VIP room, which has “worked very well,” he said. “Some customers like the tranquility.”

Next up is a company-owned, 3,500-square-foot Hong Kong flagship slated to open next month that will carry the company’s entire collection. “We already have four stores in Hong Kong,” he said. “Now we’re opening in Central. It will be our largest shop there.”

Canali said for this year the company is anticipating the most growth in North America and Asia. Although the firm would like to expand with additional stores in the States, Canali said no leases have been signed. “But our retail business is growing nicely and is part of our global strategy,” he said.

Company-owned retail stores account for 20 percent of global revenues, which hit 209.8 million euros, or $272.4 million at current exchange, in 2012, a 15.1 percent increase over the prior year. Canali said 2012 was “the best year we’ve ever had,” with the U.S. still the company’s number-one market, followed by China. Same-store sales at the U.S. stores increased 20 percent last year, he added. Canali said its wholesale customers in New York, which include Bloomingdale’s, Saks Fifth Avenue and Barneys New York, were accepting of the opening of the flagship. “It’s good for the brand to get more exposure,” he said, noting that he is not expecting a drop-off in wholesale business as a result.

Since opening, tailored clothing, sportswear and furnishings have been among the bestsellers, he said.