The brand is hoping to add another four to six stores in the U.S., with L.A. on top of the wish list. 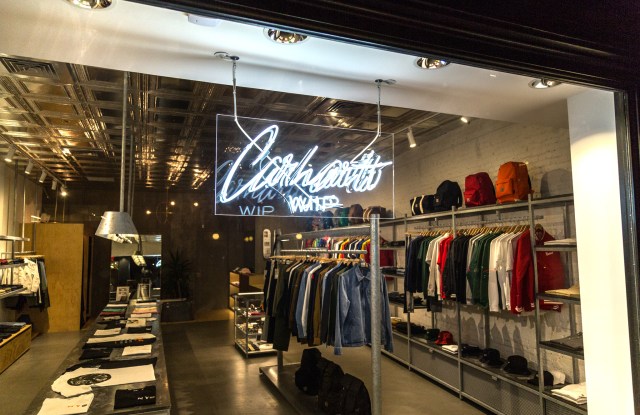 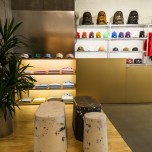 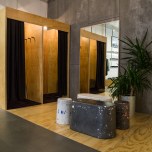 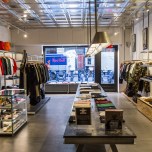 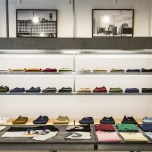 NEW YORK — Carhartt Work in Progress, the buzzy European spin-off of the venerable American workwear brand, has relocated its only U.S. store.

The 1,140-square-foot unit at 284 Lafayette Street in SoHo here is nearly twice the size of the former store on Crosby Street.

“We opened the Crosby Street store in November of 2011,” said Steve Wolski, general manager of North America for Work in Progress, “but our lease was up at the end of the year and we needed a bigger space. And Lafayette has a little better traffic.”

Ironically, the original store shares a back wall with the new one so it made it easy to relocate the merchandise.

Carhartt WIP has 80 stores in Europe, but this is the label’s sole American store — at least for now. Wolski said the brand is hoping to add four or five here, with Los Angeles tops on the wish list. Adding another unit in New York as well as in “major cities” such as San Francisco; Portland, Ore., and Chicago, where the brand performs well, is also under discussion.

The SoHo store has a different look and feel than the older store, which had a “rustic, woodsy vibe,” he said. “This is an intentional 180 — our stores in Europe look more like this.”

The store has an industrial feel, with a punched tin ceiling and metal display tables. It has an airy and contemporary aesthetic and was designed by Andrea Caputo, who also created the European units, Wolski said.

There are racks to display the brand’s flagship outerwear and pants while special-edition T-shirts are folded on tables inside the front door.

“We’re able to fit more product, which is helpful. And from a functional standpoint, there’s more storage,” he said, opening a drawer below the pants display, which held additional sizes.

The brand’s signature jackets — the classic chore coat, the canvas hooded Active jacket and the Detroit, which has a corduroy collar — are historically among bestsellers for the brand, he said, along with its cargo bottoms. The special New York edition T-shirts, which feature saw blades and peace signs over an image of the Earth, were designed by Adam Rossiter and Joe Garvey and are only available in the SoHo store.

The Carhartt Co. was founded by Hamilton Carhartt in Detroit in 1889 as a workwear brand and it is still owned and operated by his descendants. In 1989, Swiss national Edwin Faeh started importing the workwear to Europe. He holds the global license for the line.