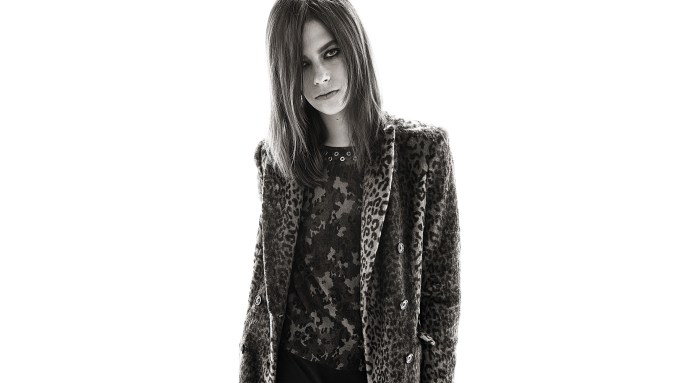 PARIS — “When clothes are very simple, it’s the small details that matter,” said Carine Roitfeld, grabbing a black sweater off the arm of the sofa to show off its ballerina neckline ringed in studs, its waist-hugging shape, its narrow sleeves that stop at the wrist bone. “Everything is about proportion.”

Holed up in a meeting room at the Shangri-La hotel here, Roitfeld was showing off the holiday collection she’s done for Uniqlo, a project that propels the Japanese fashion giant into dressier, edgier fashion territory — up to and including fishnet stockings, a slipdress and a vinyl trenchcoat — and delivers the fashion editor’s Parisian style to the masses.

Indeed, the collection is a Roitfeld dream wardrobe, engineered to her specifications, and honed in her image.

“It’s the first time I’m going to have clothes that I don’t have to take to be altered. Everything is exactly as I want it: Fitted as I like, with the necklines I like, the colors,” she said in an exclusive interview. “I think all women dream of having made-to-measure clothes. It’s the biggest luxury.”

Roitfeld hopped off the couch to show off the cardiganlike fit of a long, collarless boucle jacket, shoving her hands deep in the pockets, pointing her toes inward and bobbing her head forward and to the side, letting her curtain of brunette hair cover one of her raccoon eyes.

Like Karl Lagerfeld, Roitfeld has a personal style that is as steady as the Eiffel Tower and as delineated as a sketch: him, a white collar, dark suit, white ponytail and black sunglasses; her, a knee-length pencil skirt, a silk blouse, and waist-hugging coat with the collar up — plus killer heels.

Roitfeld poured all of her personal preferences — double-breasted cuts for coats; muted colors for camouflage and animal prints; liquid fabrics for blouses — into the collection, along with a detailed approach to button placements, linings and finishing.

Yet she is adamant that she has not morphed into Miuccia Prada.

“There’s nothing revolutionary here. I’m not a fashion designer. I’m incapable of doing that,” she said. “But I think the collection is easy. It’s an attitude, and you can easily see me in these clothes.”

To realize her ideas, Roitfeld relied on the expertise of Naoki Takizawa, Uniqlo’s creative director, who joined her for the interview, but let her explain the intricacies of the collection, from its hole-ridden sweaters with a punk attitude to a T-shirt bearing Roitfeld’s likeness, sketched by in-demand calligrapher Nicolas Ouchenir.

“Everything is designed to Uniqlo standards, but I never wanted to water down her taste because I completely trust her sense of fashion,” Takizawa said. “All the pieces here are quite new for Uniqlo — a faux fur coat, a silk slipdress. It was a challenge to find the fabrics she wanted — and to produce them to her high standards.”

For example, Roitfeld has a penchant for men’s wear fabrics, such as herringbone tweeds and pinstriped flannels, and sartorial details like working buttons on jacket cuffs. The latter are rare on designer clothes, never mind from a fast-fashion chain.

“I find it very chic to be able to show the lining, the color of the button,” she said. “It seems silly, but I am obsessed with such details.”

Roitfeld’s collection is to be priced higher than regular Uniqlo collections and at the same level as the line done by Inès de la Fressange, another French style icon who introduced her range in 2014. The collection also is the latest tie-up between the Japanese retailer and a French personality or designer — Uniqlo early next month will introduce a 30-piece women’s and men’s capsule collection by Lemaire.

The editor spoke about her encounters with Tadashi Yanai, the chairman, president and chief executive officer of Fast Retailing Co. Ltd., Uniqlo’s parent, who has the ambition to make the company the world’s biggest fashion retailer. She was impressed with how receptive he was to her very French fashion propositions, some evocative of the kinky bourgeois character portrayed by Catherine Deneuve in the 1967 film “Belle du Jour.”

“It’s not obvious to understand, because Inès is also very Parisian, and it’s great that Inès had already started her line, but this is a very different style, she is more casual than me, no?” Roitfeld asked. “She has a lot more pants than skirts. But it’s perfect for Uniqlo because it’s another idea of elegance, and I’m always more in a dressed-up mode — cocktail for day.”

She described Yanai as tough and focused, and was appreciative of his direct approach, without intermediaries, only a translator to bridge the language gap.

“I have a very simple philosophy about how to get dressed: Just a skirt and sweater, for example. I think he was pleased to hear that,” she related. “Like Coco Chanel always said, ‘You should always remove one thing after getting dressed, there’s always something too much,’ and that’s very much my way of thinking, and Mr. Yanai thinks the same way: Valuing simplicity, low pricing, ease and speed of getting dressed in the morning.”

Roitfeld credits her friendships with designers such as Lagerfeld, Tom Ford and Riccardo Tisci for helping her learn a great deal about fashion; along with the experience of wearing such designers as Rick Owens, her go-to guy for sexy pencil skirts, and Junya Watanabe, an under-appreciated tailor.

Yet she referred to Coco Chanel repeatedly, mentioning the Uniqlo cardigan jacket has the qualities of comfort and practicality the late designer exalted. “She’s the best reference you can have in fashion because she always thought about women, and herself. A lot of designers create, but they don’t wear the clothes,” Roitfeld said.

While plain, fitted clothes easily suit Roitfeld’s beanpole figure, the editor insists there are silhouettes in the collection that would suit a range of body types. “For sure the narrow pencil skirt in fake leather is not for everyone, I don’t deny that, but the cardigan, the sweaters, the men’s wear-style coats — I think that anyone can easily wear those,” she said. “My idea was practicality — to have pockets on the clothes, to have things mix and match easily.”

The collaboration with Roitfeld, the founding editor of CR Fashion Book and global fashion director at Harper’s Bazaar, is meant to continue for at least another season.