The deal represents the first time Herrera has sold at Jeffrey New York. 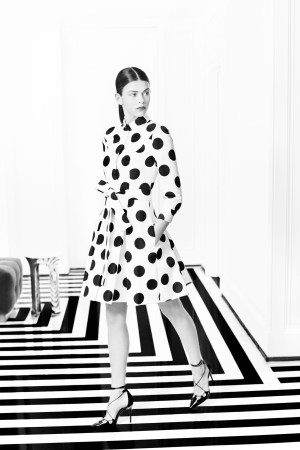 The L.A. Wellness Studio That Saw Growth Amid COVID-19

The designer is launching an exclusive capsule for the retailer on Feb. 9 comprised of seven styles all featuring magnified black and white polka dots on silk faille. The whimsical offering represents the brand’s first partnership with the two-unit luxury retailer and the first time Herrera is selling at Jeffrey.

The capsule’s signature silhouettes, including a party skirt and trench dress, raised hemlines, pinched waists and culottes. Retail prices range from $845 to $2,300.

“Jeffrey’s stores are very chic with lots of energy….I know it will fit right in,” said Carolina Herrera. “We wanted this collection to be striking, to please the eye with defined silhouettes and options for women to make the look their own. A woman must always feel comfortable, confident and wear what suits her personally.”

Asked what influenced her to design an entirely polka dot capsule, she said, “I have always loved a polka dot motif, it was in my very first collection — they are quite graphic and eye-catching. It’s a timeless print, and dots are amusing to talk about.”

Jeffrey Kalinsky, president and chief executive officer of the retailer, said the collaboration was something that’s been on his mind for a while, and he decided one day to pick up the phone and call Herrera’s firm.

“I wanted to take Herrera’s shapes and make them right for my store. I wanted to do them in just something that was iconic to the brand, but at the same time would resonate for our brand. I just thought that the polka dots would be a very strong statement and would be a lot of fun,” Kalinsky said.

Also in the works is a fashion week installation at the Meatpacking store that will be introduced in tandem with the Herrera collection. “This means so much to us. I didn’t want to put it out there until then,” he said. “I have so much respect for Mrs. Herrera and the brand.”

He’s open to doing a fall collaboration as well and said, “It’s currently being discussed.”

The looks will be sold at Jeffrey’s New York and Atlanta stores, as well as online at jeffreynewyork.com. Kalinsky declined to reveal how many pieces he purchased or a volume projection.

“It was about doing something fun and special that’s only available at the store [and online],” he said.