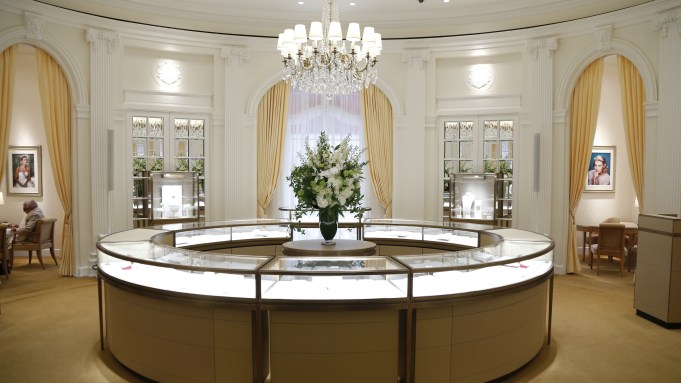 NEW YORK — Steeped in tradition and brimming with history, the renovation of Cartier’s mansion at 653 Fifth Avenue here was not a project to be undertaken lightly — or inexpensively.

The renovation, which took two-and-a-half years, expanded the selling space to four floors from one-and-a-half and more than doubled the space to 44,000 square feet from 20,000 square feet, making it the largest Cartier store in the world.

Other elements of the restoration pushed the project six months past its estimated completion date, including moving the entrance on Fifth Avenue to the center of the building for the sake of symmetry; evening the floors throughout the two, formerly separate buildings that composed the mansion; adding two elevators, one designated for VIPs, and building a grand staircase that climbs four levels.

Mercedes Abramo, president and chief executive officer of Cartier North America, declined to discuss the store’s sales projections, but said, “When you put in this amount of time and effort [to renovate the mansion], my team and I have a big return on investment to deliver.”

The long-awaited reopening of the mansion comes at a key time for Cartier owner Compagnie Financière Richemont, which, like its luxury peers, has been hit by slowing sales in China, particularly Hong Kong; the downturn in the economies of Russia and Brazil, and by weaker demand from tourists shopping in Europe. The Continent has seen fewer travelers since the terrorist attacks in Paris and Brussels.

Because the townhouse has landmark status, changes to its exterior had to be blessed by the New York City Landmarks Preservation Committee, which added time and complexity to the process. Inside, floor-to-ceiling oak paneling was removed, restored, catalogued, re-created and matched throughout the mansion, while the upper floors were reimagined in a more contemporary manner. The interiors were designed by Thierry Despont.

While Abramo declined to discuss the investment in the renovation, industry sources estimated a project of this scale would cost upward of $40 million.

The mansion contains 840 pieces of sculpture, art and furniture, many unique to the location. For example, a black-and-red lacquer painting hanging in the center of the main floor features 15 layers of gold leaf. Two lioness sculptures are vintage Cartier. The four chandeliers are original to the 1917 residence.

Art ranges from period reproductions to commissioned works with Cartier themes to photographs by Laziz Hamani, who was commissioned by the company to record the metamorphosis of the restoration. Hamani chronicled the project from start to finish, capturing everything from the marble floor on the mezzanine now covered by carpet to the building’s girders. By homing in on unremarkable materials, one image looks like a detail from a Gustav Klimt painting, another like a piece of pottery with a Greek key pattern.

A mezzanine above the main-floor jewelry salon is newly functional since the restoration. A spokeswoman said before the mansion became a store, it was the residence of banker Morton Plant and his wife, Maisie, whose habit was to look down from the mezzanine on the night of a party to see what her guests were wearing before getting dressed.

Pierre Cartier, the trailblazing son of maison founder Alfred, in 1909 established the business in New York at 712 Fifth Avenue. The young Cartier was smitten with the mansion at 653 Fifth Avenue and determined to get it for his jewelry business.

Maisie Plant wanted a pearl necklace. In 1917, she traded Pierre Cartier the mansion for a double strand of 55 and 73 natural pearls worth $1 million. A reproduction of her wearing the pearls and painted in 1918 is hanging in the the main-floor high-jewelry salon.

“In New York real estate at the time, the deal was mutually beneficial for Maisie and Pierre,” said the Cartier spokeswoman.

The main floor is the heart of the house and devoted to jewelry, which will be rotated through the vitrines. The brand has a range of styles, from garlands dripping in diamonds or flamboyantly colored gems to the panther, designed realistically or graphically.

On the staircase landings, secret entrances can be used to spirit VIPs to private consultation rooms. To the right of the staircase on the second floor is a circular salon that pays homage to longtime client Princess Grace of Monaco, with moldings of the family’s royal warrant on the walls. There’s the official royal portrait of the princess wearing a tiara and a photo of the-then Grace Kelly flashing the 10.48-carat engagement ring that was given to her by Prince Rainier III in 1956. She wore the same ring in “High Society.” The 64-carat diamond necklace Cartier made her in 1953 is displayed in a glass case, as is a diamond bracelet from 1955.

While the private rooms with walls clad in soft white, diamond-patterned leather contain numerous official photos of the late princess, there also are several more private “personal snaps that have never been published,” the spokeswoman said, including one of the prince and princess in front of a sign that reads “Please do not walk on the water.”

Passing through the book-lined Pierre Cartier salon — which comes complete with oriental carpet and fireplace — takes one to a salon devoted to another famous client: Elizabeth Taylor. The room, complete with green burnout velvet drapes, is naturally devoted to high jewelry as well, since Taylor’s many marriages gave Cartier the opportunity to create spectacular pieces for her. Richard Burton bought a 55.95-carat natural pearl that Cartier made into a necklace with diamonds and rubies. He also gave her a $1.1 million, 69.42-carat diamond necklace, while Mike Todd presented her with a ruby and diamond suite.

The third floor is devoted to watches, with men’s styles in the Gary Cooper salon, a masculine room with brown leather-covered walls and red leather furniture.

Accessories, handbags, sunglasses, objets and “exceptional items” such as fountain pens shaped like birds and decorated with diamonds and colored stones are housed on the fourth floor, which has a red ceiling mimicking the signature Cartier gift box. A small room is devoted to Cartier’s fragrances; the company employs a full-time “nose.”

Fragrances can be tested by opening one of several iconic Cartier red boxes and sniffing the scent, which triggers a video to play on a screen that explains the fragrance and how it was made. Cartier also still has a bespoke fragrance service.

The fourth floor also houses the service salon, where consumers can have a watch battery replaced, size a piece of jewelry or have an item repaired. They’ll get a text message telling them when their order is ready.

The fifth floor contains the company’s workrooms, which have long been part of the Cartier tradition. The company has a working archive in New York, as well as archives at its flagships in Paris and London. Included are images of Jacque Cartier riding a donkey in India and overseeing pearl divers. The latter made its way into a small catalogue that was sent to clients in 1922. Also chronicled assiduously are special orders.

An event space on the sixth floor will be used for introducing collections and education.

During the two-and-a-half-year renovation, Cartier has maintained a temporary store on 59th Street at Fifth Avenue, near the Apple store. That unit will remain open for the time being. “We’re keeping it for the short term,” Abramo said. “Some cities have seven or eight Cartier boutiques, so it’s not unimaginable that we would have two large stores in New York.”

“We want very special pieces in watchmaking and jewelry will to be here,” Abramo said, referring to the mansion.

Abramo said the temporary store has attracted some new clients. “Customers in general shop more and more around the world,” she said, noting that Cartier has 32 units in the U.S. and three stores in Canada.

“We’re investing in our flagships,” she said. “We haven’t focused as much on some other cities in the U.S. where we don’t have stores. That doesn’t mean we aren’t exploring other opportunities, such as a new flagship opening in Palo Alto. We also have 150 authorized retailers.”

E-commerce is becoming more important, but still accounts for a small percentage of the business. “The price threshold online is getting higher,” Abramo said. “Clients do a lot of back and forth between online and brick-and-mortar.”

While the store has been a major focus of the company for the last few years, Abramo said most of the elements will remain unique to the Fifth Avenue location rather than be rolled out worldwide. The Despont-designed furniture, for example, was created for the mansion. It is all part of the strategy being implemented by new Cartier ceo Cyrille Vigneron, who took over in January, to localize the brand’s stores as much as possible, Abramo said.

Cartier also has used the process to upgrade its technology. Throughout the building, there isn’t a cash register in sight. Instead, sales associates will use POS on Microsoft Surfaces. It will enable the associates to check inventory, play videos for customers about products, facilitate communication between staff on different floors and, of course, customers to pay or book a service appointment. The store is the first Cartier unit in the world to have the technology and the company hopes to roll it out to its other stores in the near future, Abramo said.

The renovated mansion has necessitated a doubling of the staff from 60 to 120. “We have people who speak 29 different languages,” Abramo said. “We wanted diversity.”