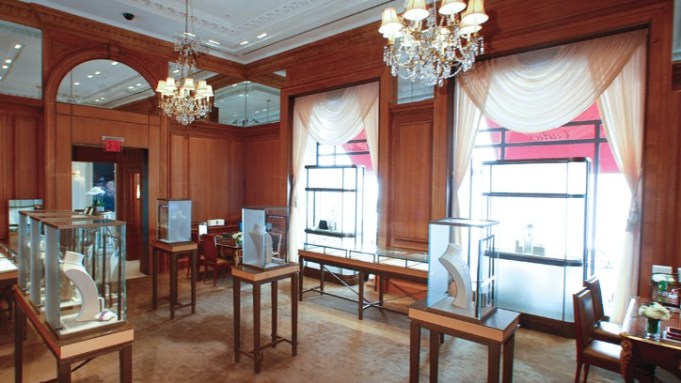 Approaching the Cartier flagship for my official guided tour, I noticed the flags of the U.S., France and England fluttering from the building’s ornately carved limestone exterior.

The Place de Cartier sign on the corner of Fifth Avenue and 52nd Street furthered my impression: amid Midtown’s growing mass appeal and predictability, the Cartier flagship projects a formidable, singular character, more like a consulate than a commercial enterprise. Only the red awnings with the scripted Cartier logo modestly give away the mission.

But inside, past the regal lanterns and the 12-foot brass doors, the formality seems to soften. Not being a Cartier shopper, it felt good to see a fair amount of walk-in traffic — it’s not all by appointment — and to learn that the assortment has an expanded range. I’m shown the iconic Trinity, Love, Panthère, and Caresse d’Orchidée jewelry collections, as well as the small leather goods, key chains, fragrance, eyewear and stationery, and see nothing at all trifling or blatantly trading down. A few pieces on the flamboyant side perhaps, but they’re entirely offset by the dazzling haute array of a diamond necklace with sapphires, and a ruby necklace from Madagascar, both priced in the millions.

I’m further impressed by an area exclusively for watches — more here than at any of Cartier’s 36 other stores in North America. The watches are generally priced from $2,300 to $300,000. Some of the most precious, however, command price tags exceeding $1 million. The ambience for this growing category is updated, compared with a few staid spots elsewhere, which is to be expected in a site that’s more than 100 years old.

Along with the riches, there’s a sales staff with a dignified, laid-back approach. They acknowledge one’s presence with a smile, eye contact or a greeting, while affording space to explore independently. Sometimes customers, particularly preferred shoppers examining one-of-a-kind pieces or bridal jewelry, are served Champagne, though I didn’t hear corks popping.

I am surprised to hear several of the Cartier crew refer to the flagship as their “boutique” as if intentionally understating its grandeur. The flagship, at 653 Fifth Avenue, was originally a 50,000-square-foot mansion that’s been sensitively converted to house 7,000 square feet and two levels for selling without corrupting the residential and historic character.

When I meet Anthony Ledru, Cartier’s vice president of retail, he exhibits some earthiness upon reflecting on his job and the realities of conducting business in a recessionary climate. For the past 16 months, Ledru has been running Cartier’s North American retail operations, though he has spent 10 years with the company involved in wholesaling in Brazil, Venezuela, Colombia and the Caribbean. His favorite part of the job is doing exactly what this  guest is doing — walking the space and watching the activity.

“The mansion is my garden,” he says. “We should all take the time to go through. I love to be on the sales floor because you get real information there, from the customers and the sales associates. It’s how you truly understand if the strategy is working.”

The sentiment builds. “Working here, you feel that you are part of history. That gives us more of a sense of responsibility and a push to succeed. What’s most amazing is that 100 years ago, Pierre Cartier [grandson of founder Louis-François Cartier] was thinking international,” by expanding the business from Europe to America.

In New York, Cartier first opened in 1909 at 712 Fifth Avenue before  relocating to the mansion in 1917. The mansion was built by Robert W. Gibson and C.P.H. Gilbert around 1904 as the home for fi nancier Morton Plant, who decided to sell it to Pierre Cartier for $100 and a double-strand pearl necklace valued at $1 million. “It was a great deal for both parties,” Ledru says.

The mansion, a designated New York City landmark, was one of the last private homes constructed in what was then a neighborhood of millionaires’ mansions, and for visionary Cartier, it was the most apropos setting, considering he had been selling to the likes of the Rockefellers and the Vanderbilts, who were accustomed to, and probably required, the graciousness of a palazzo. Cartier’s mission, as Ledru says, was to provide “a memorable experience.”

The mission is also to provide a true luxury experience yet take a pragmatic approach in developing revenues and retail locations. The philosophy has never centered around simply building up. “We have always been cautious with growth,” Ledru says. “We are much more controlled. There has never been a revolution at Cartier.”

The conversation later turns more brick-and-mortar when I’m met by two Cartier archivists. They describe the flagship as comprising a series of salons that each embrace a major category.

The archivists are particularly proud that the original scale of the building and its rooms, with double-height ceilings, and the effusive architectural detail, from the crown moldings and carved woods to the plaster-sculpted ceilings, have been preserved. There have only been a few changes, most minor and for practical reasons. The chapel, for example, was converted to the vault. And the bronze clock on the Fifth Avenue facade was originally on a pedestal by a fence, which prevented foot traffic from looking into the mansion. After the mansion became a store, the city requested the fence and pedestal be removed because it was impeding the flow of foot traffic.

The most significant change occurred on 52nd Street where the mansion’s formal entrance originally stood. It’s now a side entrance under a balcony leading to the heavily decorated oval room, housing bridal jewelry.

The front of the flagship on the Fifth Avenue side was originally the smoking room with a mezzanine. Upon converting the mansion to retail space, the mezzanine was removed to achieve height and to make a statement upon entering the store. The room is adorned with Louis XVI-inspired carved wood walls and plaster moldings, and houses the Panthère, Love, Trinity and Caresse d’Orchidée collections.

A bit deeper in, there is a wood-paneled viewing room with sliding wood doors for complete privacy. Then comes bridal, followed by the haute jewelry salon, which was once the dining room and has an intimate setting, featuring restored oak paneling, mirrors above the carved picture rail and carved plaster ceilings. It exudes the Cartier artistry and mystique showcasing vintage pieces.

Beyond haute jewelry is the watch room, with bleached oak panels and bronze trim, creating the most updated ambience in the store.

The second floor has Pierre Cartier’s office, now a private viewing room; an exhibition area for leather goods, accessories and special events punctuated with elaborate crown molding, a fi replace and plaster ceilings. The two rooms together once served as the library. There’s also an after-sales service room, a workshop for repairs and a bridal set-for-you custom service on the premises.

Currently, demand is down but hasn’t disappeared.