The brand is offering the market a sneak peak of the collection at a Fred Segal pop-up ahead of a full launch in the fall with Nordstrom.

Thieves Gold to pop in at Fred Segal ahead of Nordstrom fall launch.

LOS ANGELES — The founders of Pair of Thieves are offering a preview of their newest line, called Thieves Gold, at a Fred Segal pop-up that opens Friday, ahead of a full launch in the fall at Nordstrom.

Cash Warren, Alan Stuart and David Ehrenberg — friends dating back to elementary school — started Pair of Thieves in 2012, originally with the idea of creating a sock line with a point of view. It has since grown to now include boxers and T-shirts for men, in addition to women’s underwear and bralettes.

Thieves Gold is positioned in the market as a premium brand with a focus on what Warren called the details.

As Pair of Thieves broadened distribution, the company found it had to “strip away a lot of those bells and whistles,” as Warren put it, as the line became more mass. Thieves Gold allows the founders to focus their attention on a brand aimed to be elevated.

“The details matter,” Warren said. “The space is crowded. You’re seeing a lot of brands entering the space and, for us, we really don’t want to be viewed as a novelty brand. We really look at fashion and trends…hopefully, that passion comes across in the product.” 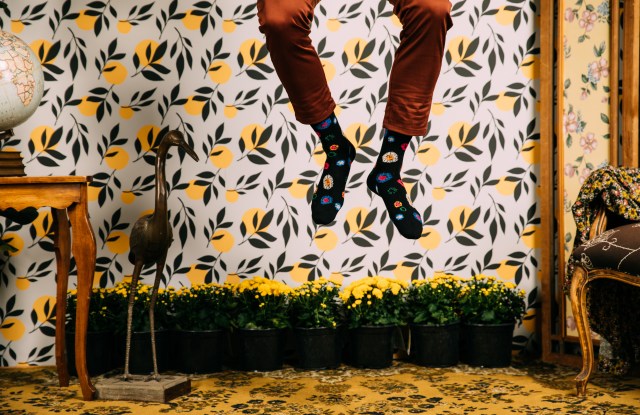 The line is produced overseas, with a focus on quality and performance fabrics, including cotton modal for shirts, cashmere and merino socks and underwear made of merino wool and a moisture-repelling hydrophobic silicone wash.

“We put together a nice capsule collection that gives a solid preview of what we’re launching this fall,” Warren said of what’s being shown at Fred Segal. “Thieves Gold is a basics brand. We make underwear, socks and shirts. The goal here was really to provide the best quality product we could create at still an affordable price point.”

The Thieves Gold pop-in at Fred Segal, running through June 30, will include a window display facing Sunset Boulevard and what the company is viewing as an immersive experience into the brand.

“With Fred Segal we really wanted to create an environment with robust storytelling so we’ve infused the space,” Warren said. “We’ve layered in a ton of amazing items with deep, rich history. It’s all solid gold, everything — whether it’s boxing gloves to a vintage television to a 1982 jet ski. We painted it all solid gold. It creates a visually striking moment in the store.”