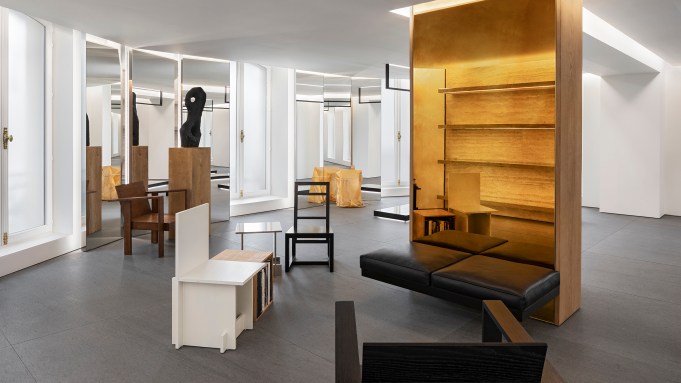 PARIS — Celine has opened two boutiques in Paris as part of a major worldwide retail push, with site-specific designs that illustrate the dual facets of the store concept designed by creative director Hedi Slimane.

Its revamped flagship on Rue de Grenelle on the Left Bank features vintage elements, including French wooden furniture from the Sixties and Seventies, while the brand-new men’s store on Rue François 1er reflects the house’s architectural concept, juxtaposing materials such as natural stones with backlit ceilings and display units.

The Grenelle store, which opened on March 4, has doubled in size to 4,950 square feet, with the ground floor expanded and dedicated to women’s wear, while a new second floor offers the men’s collection. The original element left of the former store is the polished concrete floor.

Walls are covered in stones including Grand Antique marble, a deep black stone with graphic white veining from the South of France, and travertine from Iran, in an overall design that blends elements of Brutalism, Modernism, Bauhaus and Dutch art movement De Stijl.

Among its most striking features is a specially commissioned large-scale wall panel by U.S. artist Oscar Tuazon. Titled “Mobile Floor,” it features what appears to be reclaimed fir and oak parquet mixed with concrete and steel, tying in with other elements of the décor, such as a chair hand-carved out of a tree trunk.

Slimane has also designed geometric furniture pieces rendered in various types of wood or metal, which are clustered in lounging nooks, alongside stacks of books about art and photography — their covers all carefully color-coordinated in variations on black, white or gray.

At the top of the stairs is a multipaneled ink painting by Shawn Kuruneru that blends modernist geometric abstraction and Chinese calligraphy. The artist’s work will also appear on pieces from Celine’s fall women’s collection, including a jean jacket and a scarf.

The two-level men’s store on Rue François 1er, just off Avenue Montaigne, once housed a temporary Celine unit, and more recently a Dior Homme boutique. The floor of the 3,230-square-foot boutique is made from basaltina, a Roman lava stone that is the default material for the flooring under the new store concept.

Opened on March 5, it is studded with artworks, including a sculpture by U.S. artist David Adamo made of a block of Western red cedar; a Rindon Johnson cube sculpture made of raw hide and rope, and a totemic installation by Slimane covered in flickering LED lights reminiscent of an analogue noise pattern.

Items on sale range from a polka-dot patterned slim tie, priced at 145 euros, to a multicolored sequined bomber jacket designed by Slimane in collaboration with U.S. artist Christian Marclay, which can be preordered at a cost of 17,000 euros.

In addition to the locations opened since late February in Paris, New York and Tokyo, to coincide with the delivery of Slimane’s debut ready-to-wear collections, Celine plans to open stores this year in Los Angeles, London, Milan, Shanghai and Beijing.

“The strategy for both men’s and women’s is to tightly control distribution for reasons of image and clientele. We are focusing on our stores, and we will complement that by concentrating on wholesale distribution in a very selective way,” she added.

The speed of the expansion reflects the ambitious targets set for the brand by Bernard Arnault, chairman and chief executive officer of parent company LVMH Moët Hennessy Louis Vuitton.

Speaking at the group’s annual results press conference in January, he said Celine was “on the right track” to double revenues to 2 billion euros, which would place it among the group’s most powerful luxury brands, with Louis Vuitton and Christian Dior heading the pack.