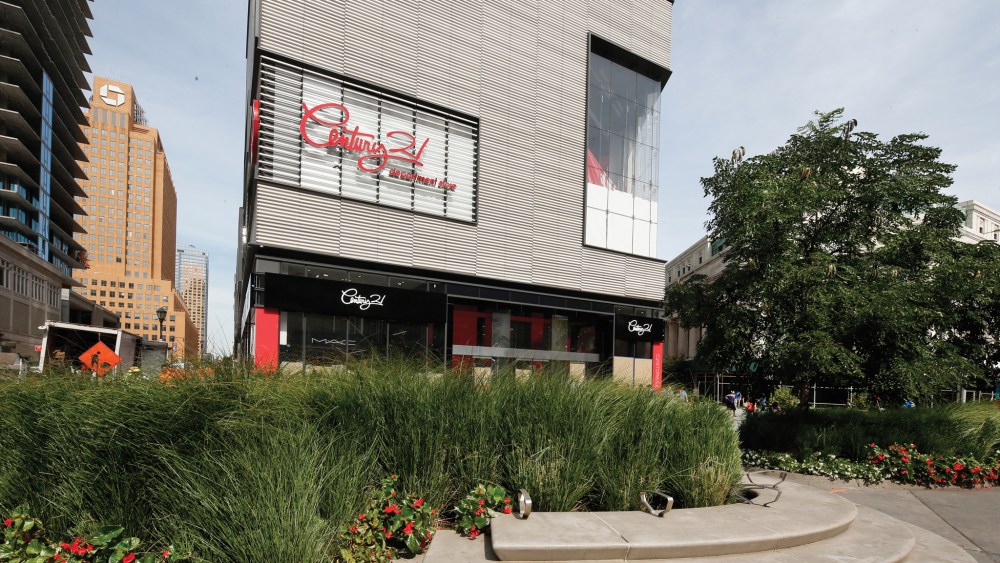 Century 21 Department Store doesn’t have near the volume or footprint of TJ Maxx or Ross Stores, though there are signs the family-run, midsized off-pricer is starting to think like a national chain.

The retailer is spreading its wings with new stores and pop-ups within and outside of its current footprint in the Northeast, including opening a 140,000-square-foot, four-level flagship in downtown Brooklyn on Tuesday. The company just launched its first private-label credit card and will test fine jewelry counters, starting at its Manhattan flagship this month, augmenting an assortment that already covers a greater array of categories than most other off-price chains.

“We have no official national strategy,” said Raymond Gindi, co-chief executive officer. “We are opportunistic with product and always in the market looking for deals. It’s the same thing with real estate. We are a growing company and looking at major city locations. We believe in opportunistic growth.”

It’s a slow, steady expansion strategy of opening one to two stores annually, and the company usually doesn’t plan more than three years out. On tap: stores in the 80,000- to 86,000-square-foot range opening in Sawgrass Mills, Fla., in November; in the Cross County Shopping Center in Yonkers, N.Y., in fall 2017, and subsequently at the American Dream retail and entertainment complex under development in East Rutherford, N.J.

Century 21’s new pop-up strategy tests markets in the U.S. for possible permanent stores. An 8,000-square-foot pop-up opened in Santa Monica, Calif., in May and operated for 90 days. Pop-ups in such major markets as Washington, Boston and Chicago are being considered.

The Brooklyn store — Century 21’s most dramatic launch since reopening its Manhattan flagship after it was destroyed on 9/11 — anchors the $1 billion, 1.8 million-square-foot City Point mixed-use project. It’s Century 21’s 11th unit and second-largest store, dwarfed only by the 220,000-square-foot Manhattan flagship. Sources said the store could do $40 million to $50 million in first-year sales, though Century 21 executives won’t comment on volume.

The address is listed at 445 Albee Square, though the main entrance is on Fulton Street, Brooklyn’s retail spine that has long been a bastion of wig shops, sneaker discounters and gold shops but which is being transformed with retailers such as H&M, Old Navy, TJ Maxx and Nordstrom Rack. City Point and its complement of retailers and food offerings advances Brooklyn’s retail revitalization.

Off-pricers have been outperforming the retail sector generally since the Great Recession hit in 2008. Yet Gindi said, “We see business as challenging. The off-price market is not immune to trends in the rest of the industry.” Consumers have cut back on apparel spending as they spend more on restaurants, travel and other experiences.

But there’s one trend in particular that helps off-pricers. “Everybody is looking for a deal,” Gindi said.

Gindi, along with Larry Mentzer, Century 21’s chief revenue officer and executive vice president of stores and e-commerce, recently gave WWD a preview of the Brooklyn flagship, which has its grand opening tentatively set for Tuesday.

While Century 21 has been on what Mentzer called “a four-year journey of elevating the in-store experience,” the Brooklyn flagship contains the company’s most modern interior decor and merchandise presentation. It’s filled with mannequins and forms — more than 200 in all — which one typically doesn’t find at off-pricers. It’s also merchandised by brand, not by size, as seen in other off-pricers, which requires extra effort to sift through the racks.

“Look at the depth we have in all categories,” Mentzer said, strolling through the fashion floors. “It’s not just stuff on fixtures which you find at other off-pricers. We are working hard to curate and create an experience that brings the brand to life. We are really the only full-line department store in the off-price market. Anything that Macy’s, Penney’s, Nordstrom’s has, you can find here.”

“We sell authentic designer merchandise,” Mentzer said. “Buyers go to the market three to four days a week and buy opportunistically. We’re out there, whether it’s domestically or internationally. One percent of the total [inventory] is made specifically for Century 21, primarily some sheets, hosiery and accessories.”

To further a contemporary aura, there is track lighting, polished cement floors, black lacquer accents framing shops and entrances, silvery ‘ballet bar’ fixtures complementing traditional T-stands and four-ways, and a Brooklyn Roasting Co. coffee shop in the middle of a selling floor. There are wide aisles and the selling floors are set with “a strict fixture grid with a lot of elbow room,” said Mentor.

Still, Century 21 executives don’t want shoppers to misinterpret the elevated shopping experience as reflecting any shift in pricing. They point to the large and very obvious backlit red signs indicating prices up to 65 percent off, though discounts can be higher or lower.

“We might look like a better department store, but we are keeping the value message,” said Mentzer. “We want to make sure she knows it’s value here. But in today’s world, just taking money isn’t enough. You’ve got to leave a good impression.”

Apparently Century 21 made an impression in Santa Monica with its pop-up. “It was interesting to see how many people knew Century 21,” Gindi noted. “It was an interesting way to test the market.” The pop up had a showrooming concept, organized by Shop With Me which provides portable, prefabricated retail environments and kiosks that blend online and off-line shopping.

Gindi was also surprised the first person to open a Century 21 private-label credit card was a woman in Laredo, Texas — at 4:45 a.m. “It talks to our brand being recognized,” he said. The recognition factor is enhanced through Century 21’s partnerships with international tour operators and hotel concierges, and the c21stores.com web site, which brings in new collections and brands daily, said a spokeswoman.

Century 21 may not be rushing to open a store in Laredo, but it is examining expansion possibilities in densely populated areas and tourist destinations. “We are open to additional stores in Florida,” where people are familiar with the retail brand, Gindi said, citing Miami and West Palm Beach as potential locations.

For the immediate future, the focus is on Brooklyn. “We believe in Brooklyn as a market. The changes happening here are unbelievable,” said Gindi. The City Point mixed-use center also houses Target, Trader Joe’s, an Alamo theater for movies and meals and the DeKalb food market.

For Gindi, Brooklyn has special meaning — it’s where he lives with his family, which owns Century 21, and where his father, Al Gindi, embarked on a retail career. “My Dad founded a little store on Fulton Street called G&L. It was a tiny little children’s wear shop.” Five more opened before his father and a cousin, Sonny Gindi, launched Century 21 in 1961.

“Brooklyn is in our blood,” Raymond Gindi said. “We have made a very large investment here at City Point. Just see the size of this store, the finishes, the presentation. This is a flagship.”