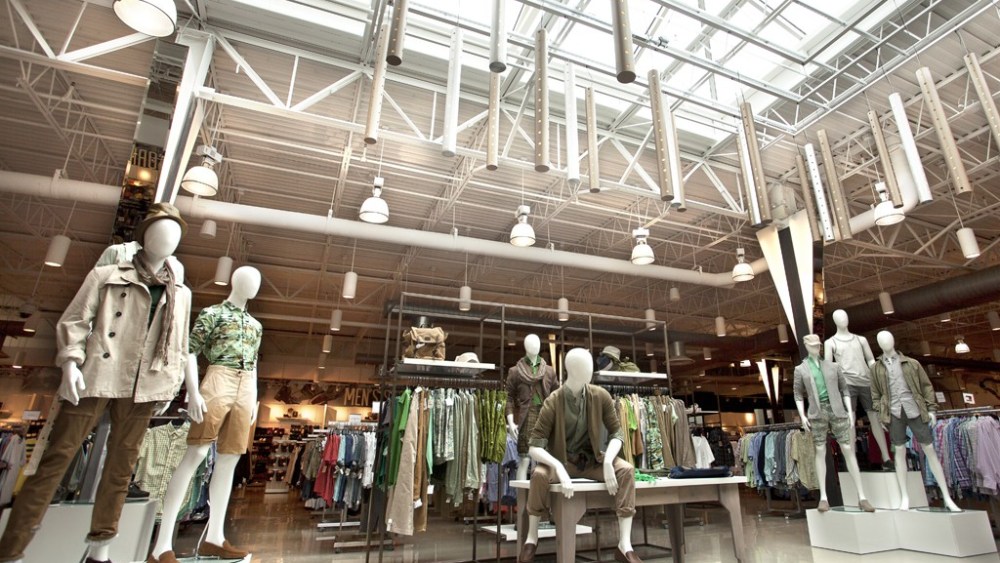 At Century 21, panache is creeping into presentation, and that’s not easy for a low-cost business ruled by deep discounts, piled-high product and value-crazed crowds.

Century 21 is planning “The Palace,” a 3,500-square-foot penthouse format at the downtown Manhattan flagship designed to spotlight high-end designers, either individually or in group shows to project a trend or a category such as vintage jewelry.

The Palace will have a private entrance on the corner of Church and Dey Streets, for an aura of exclusivity, and will operate as an event space to enhance designer partnerships through shopping parties, exhibits and VIP sales, which will, officials say, mirror the designers’ most prestigious locations. It will open this fall, with access to members only, and focus on four-day flash sales.

Also in the works:

• A new facade for the flagship, which has its main entrance on Cortlandt Street, that will wrap the exterior with improved lighting, awnings and open up windows that have been sealed up, and feature three new elevators and a glass staircase for better traffic flow.

• A 3,000-square-foot studio on Church Street to be used for conducting interviews with stylists and photographers, for fashion shoots and to support efforts to get deeper into social media. The idea is to elevate the online content and quality of e-commerce with collaborations and better talent.

• Working with the Council of Fashion Designers of America to help emerging designers meet their minimum orders.

In April, a MAC Cosmetics counter was installed on the main floor of the flagship, the first ever in an off-price setting, and a Coffee Bean & Tea Leaf Café landed on the third floor, giving shoppers a place to take a break from the bargain-hunting. This spring, the Century 21 flagship completed renovations and expansions up and down the store, bringing it to seven levels and over 225,000 square feet, and making it less cluttered, easier to navigate and quicker at the checkout, in a series of maneuvers to help lock in the downtown shopper. The Century 21 flagship accounts for about 25 percent of the chain’s total volume, estimated at $700 million. It generates within its five merchandise divisions anywhere from $500 to $2,500 in sales per square foot, but in a couple of years will face stiffer competition from the influx of retailing entering the World Trade Center, the World Financial Center and South Street Seaport, though these developments are not off-price. Century 21, as a private company, does not comment on revenues.

“We want to be more than just garments on a rack,” said Raymond Gindi, chief executive officer of the off-price chain, in a rare interview on the company and its future. “The flagship is brighter, it’s got wider aisles, it’s been cleaned up. We’ve got the first MAC counter in an off-pricer, but MAC isn’t sold at discount. We will also refurbish the facade to have a consistent look on all four sides. It will upgrade the image. We discount in the store. We don’t want to discount lifestyle.”

“We are not going for quantity, we are going for quality. We want to position ourselves as ‘the boutique’ of off-price, where the customer experience and authenticity of product are synonymous,” said Valentino Vettori, Century 21’s creative director.

According to Vettori, the company is learning from testing new ideas. “You really don’t have to change all of the store. You just need to give inspirational areas.”

The Brooklyn flagship will be “definitely close to our Manhattan flagship — 10 minutes by subway,” Gindi said. In terms of its impact on sales at the flagship in lower Manhattan, “It’s a bit of an unknown,” Gindi said. “I am sure there will be some cannibalization. A lot of people who live in Brooklyn shop our downtown store.”

In May, a compact, 30,000-square-foot Century 21 opened in the Outlet Collection|Jersey Gardens in Elizabeth, N.J. The one-level unit has an LED screen across the width of the entrance flashing trends, and what all other Century 21 locations lack — mannequins. There are huge graphics and signs, and wide aisles to make it easier to find any category. The mannequins, 70 of them, show trend vignettes, which isn’t easy for an off-pricer to present, given the buying tends to be hit or miss and odds and ends. It’s an effort by Century 21 to play it both ways — elevate the customer experience while maintaining the deep discounts.

“This is a test,” Vettori said. “Our original format is for 100,000 square feet but they’re very static. With the new format, all the fixtures are on wheels. There are no walls beyond the perimeter of the store, no interior divides. It’s one big open space so the layout is very flexible. Every six months, the major graphics will change to reflect the season, while merchandise displays change weekly.

“We use different carpeting and different fixtures to differentiate men’s or women’s. From the design to the opening, this took us just eight to 10 weeks to open. If it works, it would be easier for us to open 30,000-square-foot formats,” than the average Century 21, which is 130,000 square feet. At Jersey Gardens, men’s, women’s, accessories, lingerie, footwear and handbags are sold but no kids’, cosmetics or home.

Asked how long it would take to evaluate the store, Gindi said at least a year, to see how it gets through each season. Sources said the store had a strong first two weeks, posting about $1 million in sales. “With our Rego Park store [in Queens] it took two years just for it to mature,” to the point where a customer base was formed, and Century 21 had a handle on its performance.

The Jersey Gardens store, formerly occupied by Daffy’s, has a raw, industrial look, with exposed duct work, stripped-down structural columns and polished cement floors. “We need to care about the customer experience,” Gindi said, almost apologizing for a reputation of just focusing on price and piles of product. “It does require a different way of working — greater coordination between fashion directors, the creative director, allocators, buyers and the visual team, but if you try to elevate too much, you lose the value element. We are using this as a test to understand what is too much and where to step back.” The presentation at Jersey Gardens is most important, Gindi stressed. “There was a misconception by some people that this was an outlet version of our off-price stores, and that we were selling leftovers. That is not the case.”

The store has plenty of labels, with Nautica, D&G, Boss, Nike, Free People, Jessica Simpson, Levi’s and Steve Madden, among the most abundant noticed during a recent visit. Century 21 buys merchandise that is temporarily kept in storage until brands and designers give the OK to display. The stores are generally 40 to 65 percent off, and reach 90 percent off on clearances. Gindi said the company does not buy too much old inventory, nor does it do pack-a-ways, as other off-pricers are known to do.

The LED screen is 15 feet tall, has an arched ceiling and extends 75 feet across the entire width of the main entrance. The windows change every week, as do feature walls, and the fitting rooms are a cut above those at other Century 21 stores, with wood stools, wood veneer and greater space. “It’s not revolutionary for retail, but it is for us,” Gindi said.

Discussing expenses to create the experience, Gindi said, “We try to keep it down.” The company did spend more on the fitting rooms, technology and graphics, but saved by keeping the ceiling open and without sheet rock, and keeping the cement floor rather than using floor coverings. “The LED is big bucket, but we spent much less on the architecture.”

“This model could open doors [to further expansion] if this works,” Vettori said.

“We are eight stores. I could see getting to 12 or 15,” Gindi said, discussing expansion generally. “We don’t want to be 100 stores. We are a family-run, value-oriented retailer, but we have been talking about what our future should be, what’s our next step. We are trying all of these experiments, but we don’t want to change our DNA. We discussed trying smaller stores that are really curated and with a more visual experience. Jersey Gardens was an opportunity that came up but we have been discussing our future. But I don’t have a crystal ball. I can’t see over the mountains.”