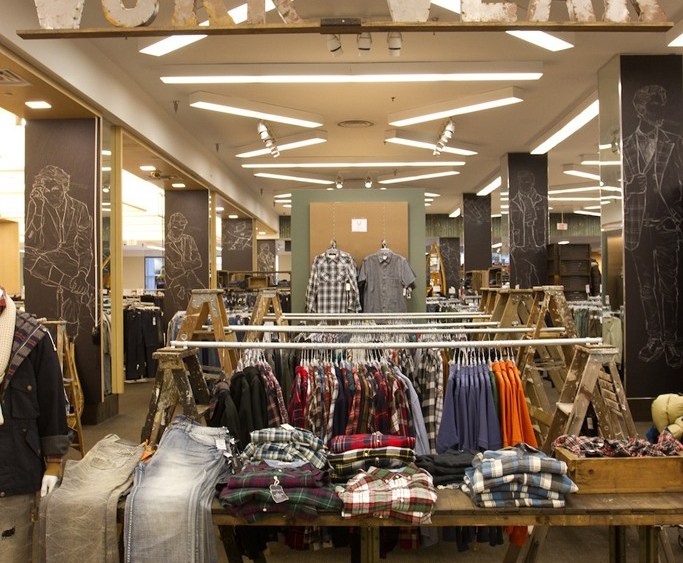 Century 21 is experimenting with an elevated men’s shopping experience at its Paramus, N.J., store in a break from the merchandising morass.

The 24,000-square-foot men’s wear floor has been renovated and reorganized by lifestyle with big metallic signs designating sections for the preppy, rocker, Americana, athletic, workwear, classic, designer and denim categories. Each area is dressed up with mannequins in designer outfits, vintage props and rustic wood fixtures, easing shoppers into the rows and rows of racks and bargains.

There’s a visual appeal atypical to off-pricers and geared to spur sales and project some style, trend and organization, without intimating shoppers or give the impression of raising prices.

“The redesign is all part of our commitment to create a better shopping experience. We hope to become not only a destination for incredible savings but also a personal style guide for the consumer,” said Raymond Gindi, co-chief executive officer of Century 21 Department Stores.

“We understand the importance of listening to our customer and continuously strive to deliver the best possible Century 21 experience. The Paramus men’s floor renovation test provides us with the necessary tools to better educate the consumer on the latest trends and designers and how to incorporate them into everyday life,” said I.G. Gindi, co-ceo.

“We’re updating without changing our DNA,” added Valentino Vettori, Century 21’s creative director, which is a new position at the store reflecting the owners’ desire for change. “We’re still discounting the goods but not the lifestyle of the consumer or the Century 21 brand. It’s the start of an evolution to be closer to our consumers. We can’t remain in the past.”

Century 21, a seven-unit, family-owned $700 million off-pricer, has long thrived with a strong buying team and sharp discounts at up to 65 percent off. Its rudimentary approach to the selling floor notwithstanding, Century 21 is among the metro area’s most trafficked department stores on a consistent basis, attracting about 70,000 customers chainwide daily.

Aside from taking a dare with the men’s business in Paramus, Century 21 is launching a regular Web site in mid-October in addition to the existing members-only flash-sale site. The company also last week dramatically expanded its lower Manhattan flagship at 22 Cortlandt Street by adding three levels amounting to 70,000 square feet, bringing the location to a total of six selling floors and 225,000 square feet.

In a couple of years, Century 21 will open a second unit in Brooklyn, bringing the chain to eight stores. The others are in Bay Ridge, Brooklyn; Rego Park, Queens; Westbury, N.Y.; Morristown, N.J., and on Manhattan’s Upper West Side.

The 135,000-square-foot Paramus store, situated in the Bergen Town Center, introduced the experimental men’s floor Aug. 28 and will test the format through November. It will be judged by the sales results and reactions from consumers, vendors and employees. Vettori acknowledged the higher costs and extra labor required for the floor, and said that a “little task force” was created to interpret market trends and keep the floor relevant. While a large percentage of the goods are a season old, they still reflect current trends, he said.

The men’s floor features 40 mannequins that get restyled every week as merchandise sells out. Wood pallets, work tables, old military bullet boxes and other vintage finds, many obtained from the Brimfield Antique Show and Flea Market in Massachusetts, are used for display in Paramus. At other Century 21 locations, displays are very limited with just a few forms or mannequins to been found anywhere in the store.

On the men’s floor in Paramus there were many prominent brands, including Hugo Boss, Vestimenta, Ermenegildo Zegna and Giorgio Armani in the classic area. Workwear featured Woolrich and Plainfield. In designer, such labels as Dolce & Gabbana, John Galliano and Versace were found. The preppy section had Tommy Hilfiger, Fred Perry, Penguin and Nautica, among other labels, and the denim section served up J Brand, Adriano Goldschmied, Joe’s Jeans and Seven For All Mankind.

Merchandise on mannequins is “within arm’s length” of racks with the same items, making it easier to select. “I don’t think men like to spend hours shopping,” Vettori said.

He also suggested that organizing the floor by lifestyle — instead of by brands, which is how Century 21 generally merchandises — further speeds the shopping for men. “We know our look. We know if we like classic styles, we will probably wear that everyday,” Vettori observed. “Normally, we stick to one look.”

Asked how the men’s floor was faring so far, Vettori said preliminary results are encouraging, with the denim selling at twice the old rate. In addition, Vettori said, “Merchandise displayed on the mannequins is selling three times faster than the average on the selling floor.”