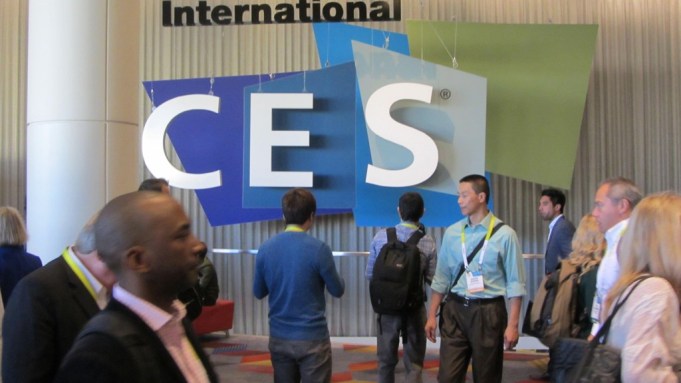 LAS VEGAS — There was no shortage of health monitors and fitness trackers for humans and dogs at this year’s International Consumer Electronics Show.

The question continues to be whether fashion can help boost sales and make wearables truly wearable, following a considerable push last year to propel the category mainstream via partnerships, such as those between Luxottica Group and Google, or Intel and Opening Ceremony.

“It’s not just about the functionality,” said Michael Bell, Intel vice president and general manager of the New Devices Group, during a Tech Talk segment at CES Wednesday. “This is about the look as well.”

Companies’ approach to striking the right balance between functionality and fashion was in full effect at the show, which ends its four-day run in Las Vegas today.

The health care and fitness segment has been the most practical gateway to consumers.

Taiwan-based Ming Young Biomedical Corp., maker of sensor-enabled clothing, shoes and socks that monitor heart rates and body temperature, is focused on the medical community. The company was founded by chief executive officer Chang-Ming Yang, a physician who thought it made sense to promote directly to the end user.

But what’s held wearables back from broader success is two-fold, said Rafael Solis, vice president of operations at Ladera Ranch, Calif.-based FashionTEQ. “The question is, is the general market ready, but then it’s also an education process for retailers themselves,” he said. “It’s a new category that’s still being defined.”

FashionTEQ’s Zazzi smart jewelry line showed at CES. The pieces send wearers notifications of incoming calls or texts by syncing with a smartphone. The collection is available for pre-order and expected to ship this quarter, with a starting  price of $200.

The company sells chargers on keychains via retailers such as Urban Outfitters and Henri Bendel. The chargers sell for $35 with a newer version priced at $50. The company focuses solely on women and counts L Brands as one of its largest customers.

The trick to making MixBin’s cellphone cases and chargers pretty enough to win over the Victoria’s Secret or Bath & Body Works customer is getting inspiration from what’s sold in stores. That has meant matching the chargers or cases to product using swatches.

MixBin has been in talks with Abercrombie & Fitch for tech-related products aimed at males, but the retailer’s challenges have slowed the efforts. “Until you can figure out your apparel, the tech is an afterthought,” Zeitzer said.

Still, much of the CES wearables and fitness show floor space was a techie’s dream, with aspirational technologies on display.

Under Armour featured a video at its exhibit space featuring clothing that morphed in color and function throughout the day for the wearer. “This is where we think the future is going,” said product manager Julianna Scruggs.

There was also the London-based designer Amy Winters, who displayed her high-end women’s apparel pieces at CES under her label Rainbow Winters. Dresses and other items in the line change color in response to sound or light. Winters said she has always been inspired by weather and wanted her pieces to reflect the idea that “clothing can have narrative and do a lot more.”