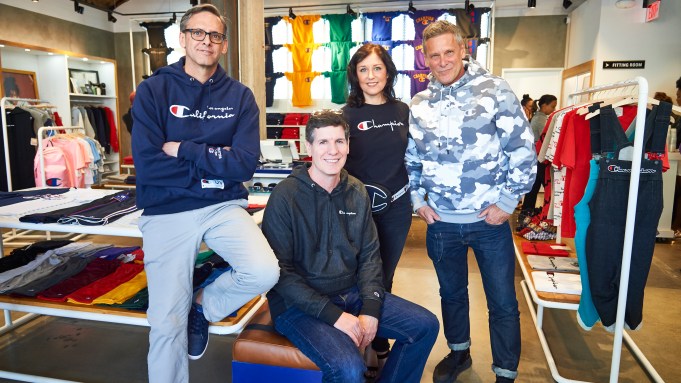 A new champion has arrived on La Brea Avenue in Los Angeles, with Champion officially christening its first U.S. store Thursday night on what’s becoming one of the hottest thoroughfares for streetwear.

“We have stores in Asia and we have stores in Europe, and the brand momentum is really strong right now,” said Hanesbrands Inc. president John Marsh. “We said it’s probably time to start to open some stores in the States, and we just love this specific area on La Brea. We’re going to keep going and we’re evaluating other locations now around the country selectively.”

The brand’s arrival places it on a block that also includes Stone Island, Undefeated, Union, Stussy, Reigning Champ, Stampd and American Rag Cie. It’s also the first time Champion is this close to its customer base.

“We love opportunities to talk to our customers one-on-one and just be there and hear what they want and what they’re saying about the brand,” said Champion North America president Susan Hennike.

Inside the 1,300-square-foot space are nods to the past — via Icon Boxes highlighting coaches jackets and warm-ups that speak to the brand’s history — a rotating assortment of merchandise exclusive to La Brea; drops from the brand’s European design studio, including dip-dye jersey T-shirts and crewnecks; a full wall in the back dedicated to the company’s number-one seller, the Reverse Weave, and a plethora of custom appliqué options ($10 more for the personalization).

The store, which soft launched about three weeks ago, has already seen steady traffic with a limited edition California sweatshirt among the top sellers. Personalized items currently account for about half of the store’s sales.

“It just tells you how much people love to take this, experiment and make it their own,” Marsh said.

At the front is a focus on localized product, which will eventually include artist collaborations and other exclusives, Hennike said.

There’s also the new women’s product with the brand now two seasons in on a dedicated women’s offering.

“Originally, she was buying extra-small and small and it was skewing all our sales,” said Ned Munroe, chief global design officer. “So we’ve taken those key learnings and developed a fit and a block in designing silhouettes that are right for her. It still stays with our same fabrications, but it gives a boxier fit where it’s a bit wider and a bit more cropped.”

It’s the full breadth of the athletic brand, which has been around since 1919 and is now back in the spotlight in a major way, bolstered by streetwear’s own rise within the mainstream and a newfound affection among youth for heritage brands.

“The thing we’re doing I think to help fuel that [market momentum] is making sure we’re being true to Champion,” said David Robertson, director of Champion brand marketing. “We talked about these Icon Boxes [in store] with these incredible products from our history that we’re re-interpreting for today, so for us it’s not about what anybody else is doing. It’s about what’s right for Champion and being true to the brand. That’s what consumers are appreciating, the authenticity of the brand.”

“Authenticity is such a big, macro trend right now,” Munroe added. “It’s all about what’s familiar.”

Bigger picture, the La Brea store, which will have a grand opening celebration for the public on Saturday, is also the start of an eventual expansion of U.S. retail for Champion, with the company already plotting its next moves. The details are scant, but there will be more doors.

As of right now, the company thinks street retail makes the most sense, but it would not be opposed to more traditional mall locations, Marsh said.

“We’re not saying where we’re going next, but we’re going to the markets that we think resonate well with the brand and there are a lot,” he added. “We’ll go where it makes sense and where we find the right opportunities.”

The pop-up format that’s taken hold industrywide is also something the company is considering.

“We’ve looked at a couple opportunities and we may end up doing that, but we’re always evaluating that and I think we’re close on a couple,” Marsh said.