Champs-Élysées Bounces Back With Store Openings

The arrival of Dior and Chanel stores on the world-famous street signals offers a glimmer of hope after months of yellow vests protests.

By Joelle Diderich
with contributions from Jennifer Weil
on July 15, 2019
View Slideshow 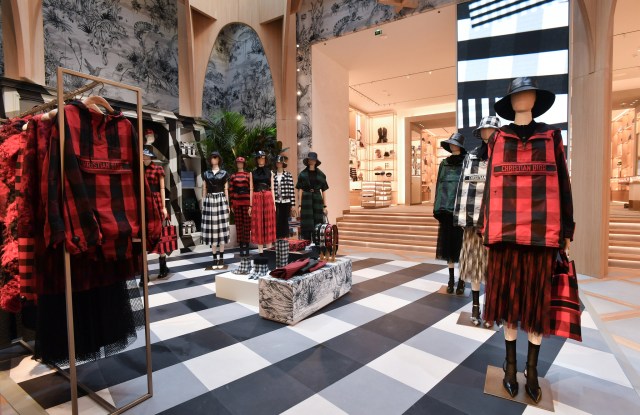 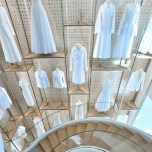 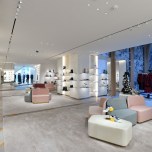 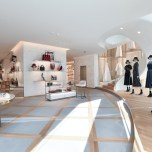 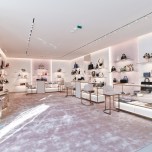 PARIS — Dior has landed on the Champs-Élysées. The luxury brand has opened a temporary boutique while its Avenue Montaigne headquarters undergo renovations, giving the battered avenue a boost as it recovers from almost eight months of protests by the gilets jaunes, or yellow vests, movement.

Meanwhile, across the street, Chanel has converted its pop-up space next to the Galeries Lafayette Champs-Élysées department store into its fifth dedicated beauty boutique in France.

The opening of the two stores on Saturday signaled the world-famous street is gradually returning to normal after months of violent demonstrations that turned it into a battlefield, causing millions of euros worth of damage and strangling foot traffic as the area was repeatedly sealed off with police barricades.

In a single day in March, protesters looted and vandalized stores belonging to Bulgari, Hugo Boss and Lacoste, and set fire to Longchamp and historic restaurant Fouquet’s. Both the Bulgari store, which sits across the street from the new Dior boutique, and Fouquet’s are due to reopen today after months of repairs. 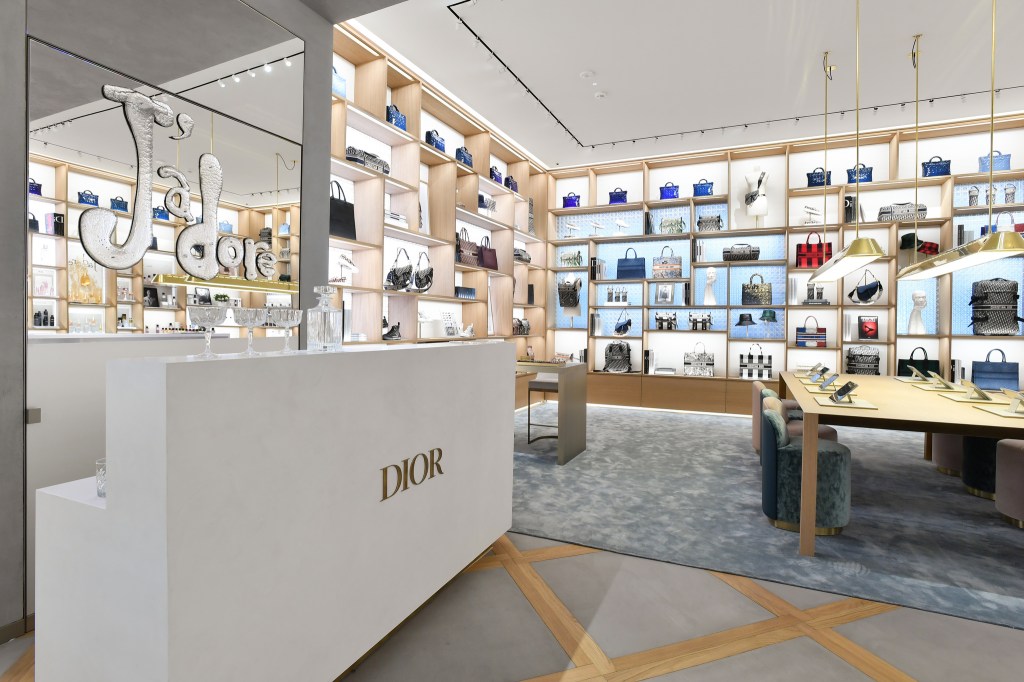 While the movement continues, with Saturday marking the 35th day of nationwide marches against the government of French President Emmanuel Macron, it’s mostly back to business as usual.

The gilets jaunes demonstrations coincided with the famed thoroughfare’s shift toward a more upscale positioning, with the recent opening of Galeries Lafayette, as well as an Apple flagship, the Bulgari store and new boutiques for Parfums Christian Dior and Nike, among others.

The Champs-Élysées was the world’s fourth most-expensive retail street last year, with average annual rents of $1,519 a square foot in the second quarter of 2018, lagging London’s Bond Street but ahead of Milan’s Via Montenapoleone, according to Cushman & Wakefield’s most recent “Main Streets Across the World” report.

Antoine Salmon, head of retail leasing at Knight Frank France, said it was too early to evaluate the impact of the gilets jaunes on rents and the attractiveness of the Champs-Élysées, adding that he has not heard of any retailers attempting to renegotiate the terms of their lease.

“It stands to reason that if there are scenes of urban violence week after week on one of the most famous streets in the world, it might give pause to anyone who is looking to do a real estate deal, whether it’s a brand looking to come here or one that is looking to sell,” he said.

But flagship locations are looking increasingly resilient as brands seek to broaden their global reach and adjust to the growing importance of business online, by homing in on a smaller number of choice locations for interaction with consumers.

“Overall, major brands, and luxury brands in particular, have a more long-term vision and they know they won’t always be able to find the right location for their concept, positioning or intrinsic criteria in a matter of weeks and months,” Salmon noted.

While plans for the Dior store were well under way when the protests broke out, Bernard Arnault, chairman and chief executive officer of LVMH Moët Hennessy Louis Vuitton, the luxury conglomerate that owns the label, suggested in April that the opening could be delayed unless the situation improved.

Instead, the store was ready ahead of schedule, welcoming its first invitation-only VIP customers last Thursday. In marked contrast with the wooden barricades that covered many storefronts in the run-up to the holidays, the flagship has extra-large windows that flood its three floors with natural light. 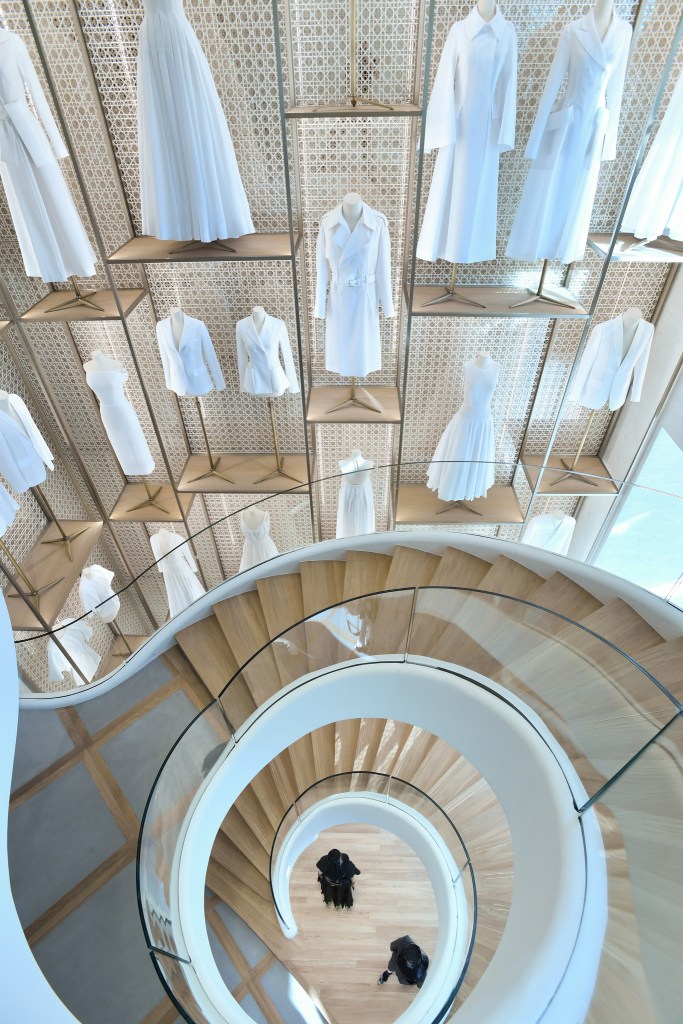 Its facade is hard to miss: The store at 127 Avenue des Champs-Élysées is covered with a gigantic canvas replica of the Avenue Montaigne flagship, which dramatically lifts up on the corner like a page being turned. A perfect backdrop for selfies, the temporary awning is expected to remain in place for several months.

Making his way up the curved staircase lined with white toiles on dress forms, Dior ceo Pietro Beccari pointed out the passersby peering into the store.

“This inauguration comes with lots of store openings, creating newness for visitors on the Champs-Élysées. You can tell by the number of people looking through the windows that the Dior store is already sparking curiosity,” he remarked.

“I think it’s a very fresh face of Dior. This store is home to a lot of firsts,” he added, launching into an impromptu guided visit of the 9,600-square-foot boutique — including a detour via the personalization department in the basement, which is off-limits to regular customers.

There, four people operate three embroidery machines and a digital printer, allowing customers to personalize an array of bags and shoes on the spot — a world first for Dior.

“We are implementing many retail concept innovations in this store, with distinct spaces that include our Cabinet des Curiosités, housing our on-site personalization service; the Shoe Paradise, dedicated to footwear, and a pop-up space that will be updated regularly with fresh drops,” Beccari noted.

Visitors enter the store through an accessories section decked out in white plaster and pink Toile de Jouy, a house signature, leading into the vast shoe department. To the left, an atrium space with cathedral-style wooden arches houses the temporary exhibition space, which will be updated regularly with new drops.

The first floor is home to the men’s department, while the second floor houses women’s ready-to-wear and shoes, as well as a VIP salon that can also be accessed by elevator using a separate entrance in the back of the store.

On the ground floor, the back walls are covered in wooden shelves displaying everything from sculptures inspired by Dior Lady Art handbags to fragrance bottles, books and accessories. A large table in the center hosts iPads where customers can peruse personalization options before placing their order.

Names or initials can be embroidered onto a Diorcamp messenger bag or Saddle handbag, or digitally stamped on a leather Book Tote in as little as one hour. Men’s B23 sneakers and women’s Walk ‘N’ Dior canvas shoes can be customized with a choice of initials, laces and charms.

The Chanel store has a similar focus on experiences. The revamped, 1,110-square-foot beauty boutique at 52 Avenue des Champs-Élysées is divided into three parts.

Walk in and enter the Chanel Boutique Studio, where people can easily access color cosmetics themselves. Two makeup artists are available to give quick makeovers or advice. Lipstick tubes are embedded along the back wall here, and there’s the new campaign for Rouge Coco Flash featuring Lily-Rose Depp playing in a loop. 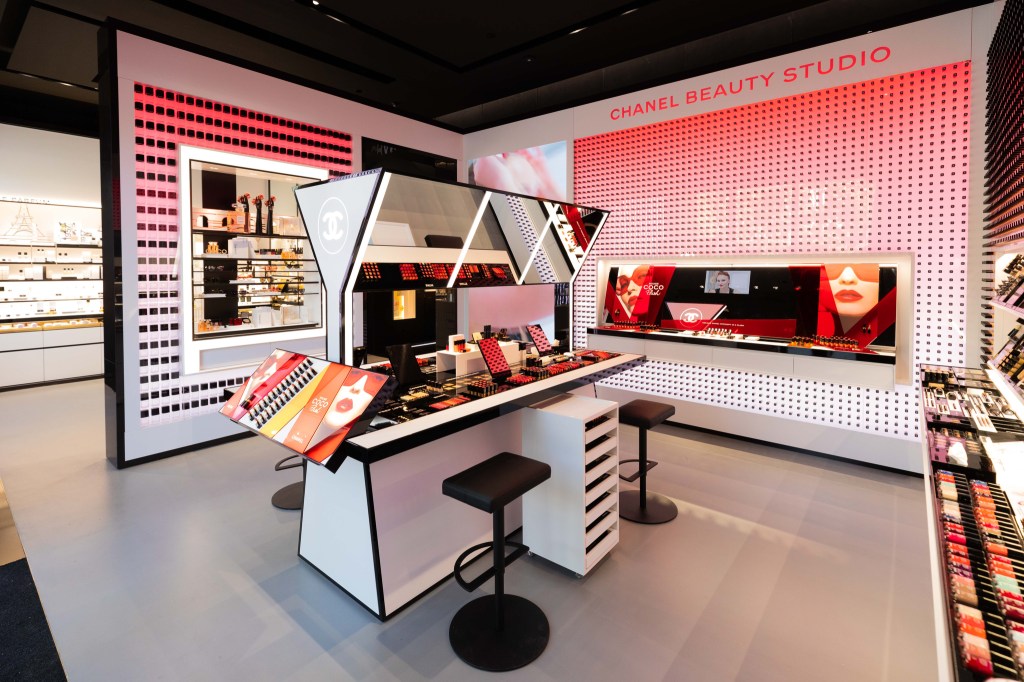 In the center of the space is a two-sided makeup station, with tilted mirrors featuring strips of embedded light. Chanel sunglasses are displayed on a wall to the left that’s ornamented with oversize nail polish bottles, behind which is the area showcasing fragrance, including the brand’s Les Exclusifs collection, and skin care.

The black beauty room, in the back, carries products sold as exclusives and that are highly luxurious, such as an extract of the Coromandel scent in a Baccarat bottle that is slated to arrive shortly. Especially created for the boutique, a 3-D pop-up case is decorated with the outline of a Parisian skyscape to hold a perfume.

As in all Chanel beauty boutiques, the decor is primarily black-and-white, and products are sold exclusively for one month before being rolled out to wider distribution.

The Champs-Élysées has long been home to beauty retailers and brands such as Sephora, Marionnaud, Guerlain, MAC Cosmetics, Yves Rocher and L’Occitane x Pierre Hermé. But that selection is set to expand.

Lancôme is slated to open a new outpost at number 72, having previously operated an institute on Rue du Faubourg Saint-Honoré, which shuttered years ago.

The risks can be high. Flanking the other side of the Galeries Lafayette entrance is the Parfums Christian Dior boutique, which was pillaged by gilets jaunes protesters soon after its opening in late 2018. Local media said the damage topped 1 million euros, although Dior officials never confirmed that figure.

Salmon was confident that despite the grim economic data, Paris would bounce back, citing the city’s resilience after the terrorist attacks of 2015. “There is a risk of sliding into bashing or alarmism. But to say the Champs-Élysées are dead — no,” he said. “Despite these tragic events, old habits return and life goes on.”

Beccari was similarly fatalistic. “I’m optimistic by nature. You have to be optimistic when you’re working on a project of this size,” he said.

The Dior boutique on the Champs-Élysées is set to remain open for at least two years, but the executive is already focused on his next project. “Once we have completed renovations on the Avenue Montaigne store, its power of attraction will be increased tenfold,” he promised.