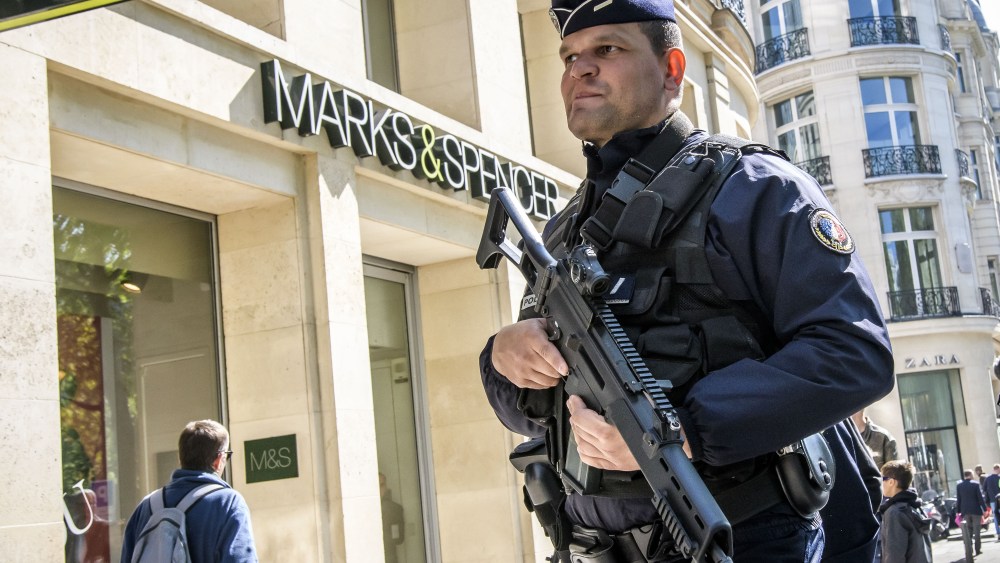 PARIS — Aside from the cameras, groups of reporters and media vans, on the surface it was more or less business as usual on the Avenue des Champs-Élysées on Friday following a terrorist attack the night before that left one policeman dead and two policemen and a tourist wounded.

By morning, the avenue’s metro stations were back open, and office workers, shoppers and tourists flooded the thoroughfare — a main shopping artery.

But the attack has already had wide-reaching ramifications. France’s President François Hollande called a meeting of the country’s defense council Friday morning at the Élysée Palais. And although French citizens are due to go to the polls Sunday for the first of two rounds of voting for a new president, campaign events were halted.

Paris Mayor Anne Hidalgo — who visited the scene of the attack Thursday night, flanked by France’s Interior Minister Bruno Le Roux, Chief of Police Michel Delpuech and Public Prosecutor Renaud Gaudeul — issued a statement offering her condolences to the families of the victims, and sent a message of support to France’s strained police force. “It is thanks to the dedication and bravery of the security forces who tonight risked their lives that we were able to prevent further citizens from becoming victims of terrorism,” she said.

Hidalgo also delivered a “message of solidarity” to the avenue’s merchants, “who spontaneously took passersby in and helped them in this difficult moment.”

“If our city is once again being put to the test, I know that the determination of the Parisians to defend their way of life, and their values, is intact. We will not yield, we will not flinch, we will remain united in the face of this odious and sly threat that weighs on all the world’s metropolises,” she continued.

A number of retailers contacted by WWD on Friday said they had reinforced security. Brands present on the famed avenue — Europe’s most expensive retail location, according to a recent report from global real estate adviser Cushman & Wakefield — range from Zara, Levi’s, Sephora and Banana Republic to Louis Vuitton.

Speaking on condition of anonymity, a manager at the Marks & Spencer store, which is located right where the attack took place, said the shooting happened 10 minutes before the retailer’s closing time of 9 p.m.

“We had to lock customers and staff in and keep everybody safe until the police said it was safe to leave,” the executive said, adding that he expected slower footfall in the “weeks and months” to come. “Tourism had just been picking up, [but] this is obviously going to be another setback for us,” he said, adding that traffic was already down by around 20 percent in 2016 versus the prior year. “It’s going to be challenging.”

According to a report by the National Institute of Statistics and Economic Studies, Paris hotels in December 2016 saw a 26.2 percent rise in occupancy rate by foreign visitors versus December 2015, although the numbers were still down 3.1 percent compared to the equivalent month in 2014.

It was nonetheless a record month for the city’s hotels in terms of American and Chinese tourists, which rose 22.6 percent and 43.7 percent, respectively, versus December 2015, and up 29.7 percent and 39.3 percent against December 2014.

Despite a 65.2 percent increase in Japanese tourists staying at Paris hotels, the level was still 43.1 percent lower than those of December 2014. Similarly, the Russian visitor count was up 32.4 percent in December 2016, but still down 17.8 percent against December 2014, the report said.

A spokesman for J.M. Weston, which is operating a pop-up store in the former Gaumont Ambassade cinema on the Champs-Élysées, said the store had beefed up its security, but that the management team was determined to remain level-headed and positive. “The tourists are still present today at the Trocadéro and on the Champs-Élysées, and we will be making every effort to make them feel reassured. It’s what they need in these tough times,” he said.

Industry experts do not think the fallout from the Friday attack will be widespread.

“What happened in Paris last night is tragic,” said Luca Solca, sector head of luxury goods at Exane BNP Paribas. “Having said that, I don’t expect a material negative impact on luxury demand, as the scope of the attack was limited and the targets were not civilians.”

France has seen a number of deadly terrorist incidents over the past two years and remains under a state of emergency that was put into effect after the November 2015 attack at Paris’ Bataclan concern hall that left scores dead.

Meanwhile, security in the country’s capital is being ramped up even more in the run-up to the elections, with the addition of over 50,000 police and military taking to the streets countrywide prior to each round of voting, when the risk of attacks is heightened.

Earlier this week two men, who were allegedly preparing an assault before the election, were arrested in Marseille, France.

Attacks causing terror keep mounting in frequency in Europe, and particularly in France, keeping retailers very much on edge. Most recently, in early April, a man drove a truck into a crowd of people at the Ahlens department store in Stockholm. Four were killed and 15 injured in the incident at the retailer located in Drottninggatan, one of the city’s shopping neighborhoods.

On March 22 an attack in London, on Westminster Bridge and the nearby Houses of Parliament, left five dead and dozens injured.

In February, the underground shopping center in Paris’ Louvre museum, which is home to dozens of stores including Lacoste, Sandro, Caudalie, Fragonard, Jo Malone, L’Occitane and Apple, was the scene of a terror act involving an intruder wielding a machete, who was shot by a soldier.

And last July, a truck slammed into Bastille Day revelers in the French seaside city of Nice, leaving more than 80 dead and scores of others critically injured.

But each time resilience is palpable, and in Paris by Friday among the only visible signs on the Champs-Élysées of the violent event the night before were some markings on the sidewalk, bunches of flowers at the base of a tree and a makeshift banner offering support to the French police, ending with the words “Vive la France.”