After seven months of testing at Chanel’s largest store in Paris, the digital innovation project is ready to roll out to other boutiques.

The apps developed by Chanel and Farfetch.

PARIS — Chanel and Farfetch are finally ready to roll out their “boutique of tomorrow.”

Almost two years after announcing an exclusive long-term tie-up, the French fashion house and the luxury e-commerce platform have unveiled the first results of their pilot digital innovation project at 19 Rue Cambon, Chanel’s largest store in Paris, as they prepare to share the technology with other boutiques in the French capital.

At first glance, the space — dominated by an 18th-century Coromandel screen reminiscent of the one in Gabrielle “Coco” Chanel’s nearby apartment — looked identical to when it was inaugurated in November last year.

But over the last seven months, store manager Elisa Lagayette and her team have upended the way they interact with customers, with the introduction of two apps — one for clients, the other for sales associates — and connected mirrors in the changing rooms.

“We always say the best technology is technology you can’t see,” said Sandrine Deveaux, executive vice president of Farfetch’s retail innovation business unit, called Store of the Future. “The team worked incredibly hard to apply that principle throughout the process,” she added.

Indeed, the technology — developed in concertation with store staff — is designed to augment, not replace the human connection between customers and their fashion advisers, or FA’s, in Chanel parlance. “That’s very different from e-commerce. One of the main objectives was about storytelling and inspiration,” said Deveaux.

“The context is very simple: Our customer has no time,” explained Pavlovsky. “When they dedicate one hour or two hours in the boutique, they just want to be sure that they see the maximum of what they like,” he said, reiterating that the brand has no plans to introduce online sales for its ready-to-wear and handbag categories.

“The question is to be able to offer an experience which is much richer or deeper than just e-commerce. You can get everything you want to have on e-commerce,” he noted. “Here, it’s something different. We want to be sure that if you pick a jacket, it’s the right one for you.”

So far, some 1,400 customers have been invited to download the client application, which allows them to view content and create a wish list before coming to the store. Once on site, they can access exclusive connected content via 30 pads, roughly the size of a makeup compact, discreetly dotted throughout the store.

The most popular takes the viewer on a virtual tour of Chanel’s private apartment, a stone’s throw away at 31 Rue Cambon, which can be visited by appointment only. Customers can also view runway images of the collections designed by creative director Virginie Viard, dive into product categories and access playlists and podcasts.

During this time, the sales associate will prepare the fitting room, using the information she has received by scanning the client’s QR code to suggest additional or alternative items, depending on in-store availability. Using the connected mirror, she can show footage of how the item appeared on the runway or in a campaign. 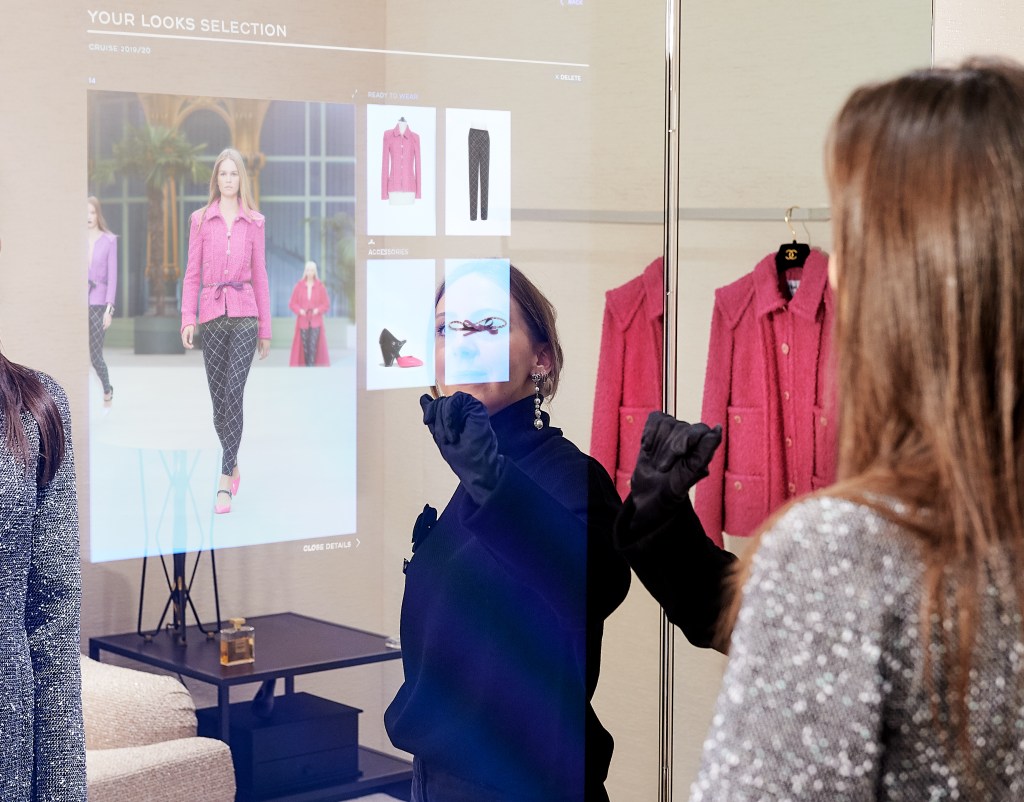 The connected mirror developed by Chanel and Farfetch.  Courtesy/Olivier Saillant

The tool, which can be switched off anytime by the client, is designed as a shortcut to get to know her tastes. Rather than spend time fetching items from the shop floor, the FA will run them past the customer first by sending an image to the connected mirror and eliminating unsuitable options.

Lagayette said the technology has already had a positive impact on sales.

“This conversation is really helping us to sell the accessories of the look or different accessories, so I think the cross-sell is really impactful. The engagement of the client also: the number of visits she does, the amount she spends,” she reported. “It’s creating a huge difference.”

Deveaux underlined, however, that none of the project’s key performance indicators were linked to turnover.

“The reaction of the customers is extremely positive,” said Pavlovsky, who noted that the technology is being continuously fine-tuned, based on the response of clients and the roughly 50 sales associates who work at the store.

“It’s not perfect. We still have some improvements to offer to the customers. We listen to these customers because every week, we have a minimum of 60 of them with whom we have connections, so we get their feedback,” the executive said. “It’s an endless process.”

The partnership with Chanel, announced in February 2018, was the first of its kind for Farfetch since it launched its Store of the Future division in 2015 and acquired London boutique Browns, turning it into a testing ground for innovations in omnichannel retail technology, or what it calls augmented retail.

As part of the agreement, Chanel took a minority stake in Farfetch, though financial details and the size of the stake were not disclosed. 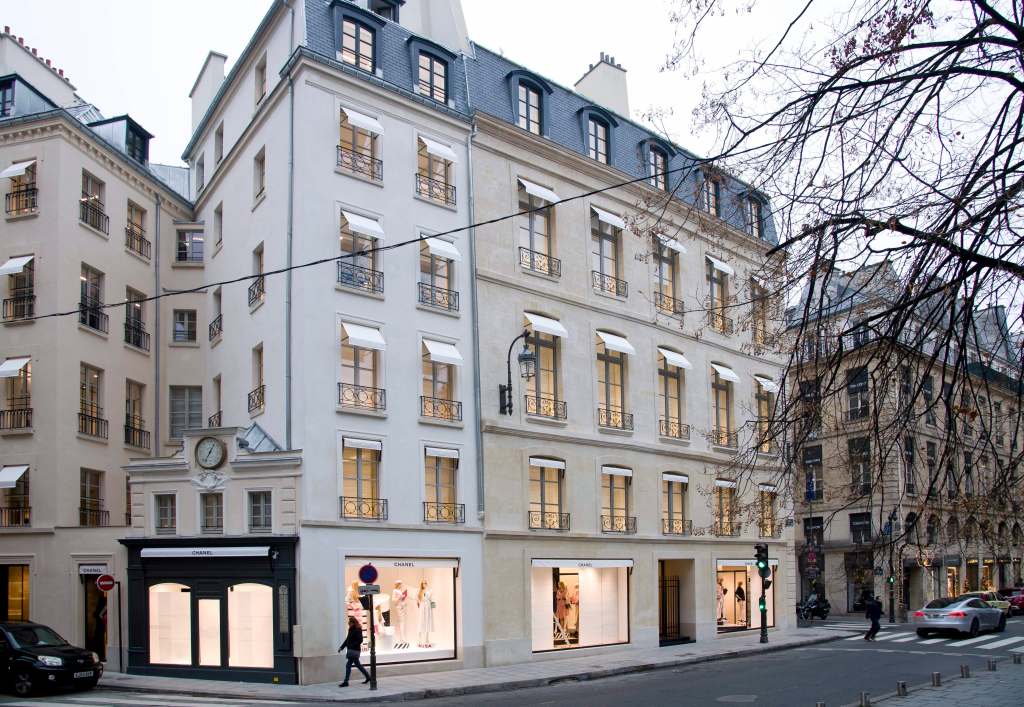 The facade of Chanel’s new flagship in Paris.  Dominique Matre/WWD

Back in his office at Chanel headquarters, Pavlovsky and Farfetch founder and chief executive officer José Neves, joining by telephone from London, delved into the philosophy behind the project, and discussed how they plan to bring it to other locations.

“We believe it is ready to be scaled,” said Neves. “We plan to roll out to other Chanel boutiques starting with France, and then we will see. The first pilot was obviously the most important step. The adoption is amazing from both the FA’s and the clients and it is a real solution.”

Farfetch plans to eventually offer similar platforms to other brands such as Thom Browne, in addition to its own Browns boutique opening on Brook Street in London in the second quarter of 2020. But while the operating system might be the same, it will develop tailor-made content for each brand.

“The tech can be the same. It’s not about tech. It’s about experience, and the experience is specific for each brand,” said Pavlovsky. “The beauty of what we have done here is that we have been able to develop something which is just Chanel.”

Neves said that once they started working together, Farfetch’s team realized they would have to reconsider everything they thought they knew about luxury retailing. “This is not a clienteling app. It’s not even an app. It’s a suite of technologies which include a client-facing app, which is very innovative,” he said.

“But it’s the entire journey: it’s the client app and how it interfaces with the fashion adviser app, it’s the in-store experience, the several ways you can interact, not just with product but with content, and then how we make it invisible, how we make it absolutely seamless and a joy to use. This will be different from brand to brand, even within Chanel from boutique to boutique and from region to region,” he added.

Pavlovsky expects three more boutiques in Paris to adopt the platform in the next year, though he declined to specify which ones.

“It’s a full new process that we are starting by having other boutiques in Paris on board with the same kind of app because we want to keep each boutique specific. We don’t want to copycat everything we are doing. At Chanel we have a principle: one boutique, one story,” he said.