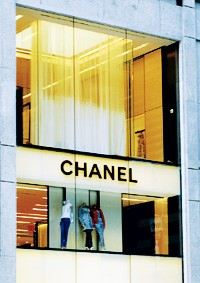 NEW YORK — “This is not about a little boutique anymore,” laughed architect Peter Marino, waving his hands airily while touring the newly renovated Chanel flagship at 15 East 57th Street.

Marino just overhauled the store, which now spans three stories and boasts 9,750 square feet, an almost 50 percent increase, of retail space. As shoppers continue to clamor for those iconic tweeds and quilted Cambon bags, Chanel wanted to create a New York flagship that reflected its ever-expanding empire. To that end, the company shut down the original store in March for a total renovation and expansion.

“We’d outgrown this space within six months of moving here [in May 1996],” said Barbara Cirkva, executive vice president of fashion at Chanel. “But we’ve expanded and grown [product] categories over the last couple of years and we had nowhere to display them in the store. Here was our flagship and you could see more product on display in Bal Harbour than you could on 57th Street.”

Marino chose to exploit Chanel’s signature tweeds, incorporating them in an elaborate fashion not only in love seats but also carpets, ornate door coverings and as blown-out patterns in glass panels. He also infused the space with a sense of femininity by hanging ethereal white organza panels throughout the third floor and adding pink silk-screened walls.

But perhaps the crown jewel is a sitting area shrouded in sweeping white drapes that evokes a heavenly aura. Artistic touches like a portrait of Coco Chanel made out of diamonds and the inside of the elevator covered in blooming camellias complement the salon-like mood.

“Peter Marino’s new design gives the 57th Street boutique a fresh and modern edge,” said Maureen Chiquet, president and chief operating officer of Chanel Inc. “It incarnates the essence of Chanel while moving the brand forward in an exciting and stimulating way. Each floor has unique visual elements that enhance the beauty and modernity of our ready-to-wear and accessories.”

The expansion comes at a time when Chanel’s business is booming more than ever. With record-breaking $5.5 million trunk shows and much-publicized Chanel No.5 ads starring Nicole Kidman and directed by Baz Luhrmann, the company’s status continues to climb. Chanel fashion references are everywhere — ropes of pearls, clusters of camellias, metallic tweeds — either authentic or knocked off.

This story first appeared in the October 20, 2004 issue of WWD. Subscribe Today.

“The [Nicole Kidman] ad is modern, it is elegant, it is really exciting,” Chiquet said earlier this month. “Not only will it be an incredible boost to the No.5 sales, it will have a halo effect on the whole brand. That ad really reflects a modern view on the brand.”

VIP shoppers will get a glimpse of the finished store at a private preview today featuring the cruise collection. The store officially opens Thursday. Designer Karl Lagerfeld has created 555 limited-edition Chanel jacket ensembles and matching bags exclusively for the New York store. Additionally, Parisian artisans from Lemarié, Lesage, Massaro and Michel are being flown in for the event.

“What’s happened in the last five years is that luxury companies have created very contemporary arenas for their stores like Prada, Vuitton, Dior. I hope that, with me, Chanel can stay up there as a leader,” said Marino.

The company is planning to renovate its stores in South Coast Plaza, Ala Moana and Chicago. The Marino-designed Tokyo store in Ginza is slated to open in December and will be one of the largest Chanel stores in the world, located in a 14-story, 66,000-square-foot building with three floors devoted to retailing. A Las Vegas store is set to open next April.

“The store’s design is a new way to restate the modern elegance that Chanel has always represented,” explained Cirkva. “Coco Chanel in her day was a pioneer not only in the way she expressed herself through clothing, but through her own interior design in her apartment, in her store. This is sort of taking it to the next level, into the next generation of modern elegance.”