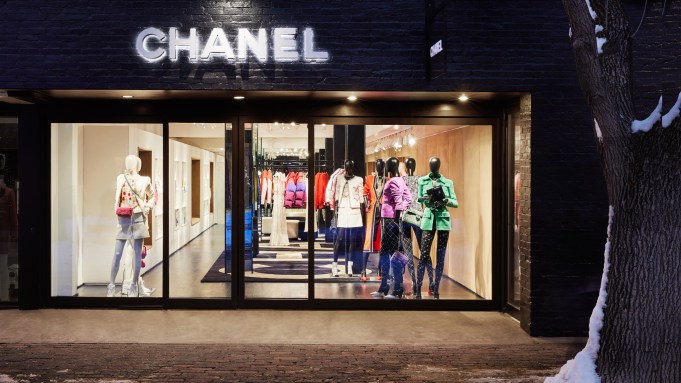 Chanel in March transformed Paris’ Grand Palais into a European ski village surrounded by white-capped mountains for its fall 2019/20 ready-to-wear show, which featured a color palette inspired by a wintry landscape, Nordic sweaters, capes, shearling and sheepskin boots, and styles decorated with tulle snowballs. It all spelled frosty sophistication.

So it shouldn’t come as a surprise that Chanel is taking up temporary residence in Aspen. The brand five years ago operated an ephemeral store — the French couture house’s term for pop-up shop — at Aspen’s Casa Tua restaurant and private club. Chanel today through Jan. 21 returns to the slopes of the upscale ski hamlet nestled at the base of the Elk Mountains. This time, the 2,000-square-foot ephemeral shop is located in proper, albeit, vacant, retail space at 416 East Cooper Avenue. The brand operated permanent stores in Aspen from 1994 through 2003.

Chanel’s Aspen ephemeral store is both intimate and grand, steeped in the house’s signature color palette of white and beige with black accents. Mirror-covered columns contour the room, their reflection extending the space and light and creating the impression of merch for as far as the eye can see. The pillars are a reference to the mirrored staircase that leads upstairs from Coco Chanel‘s first floor salon in Paris.

“As usual, we’re making a connection with the salon of 31 Rue Cambon and Coco’s legendary apartment,” said John Galantic, president and chief operating officer of Chanel Inc. “We have walls covered by soft white wool that evoke the snow-covered mountains. There’s a continuous black carpet with white lettering that spells out Chanel and runs the whole length of the store.” The carpet is designed to draw consumers into the space.

“We have a lot of customers in Los Angeles, San Francisco, Seattle, and the East Coast, who are wintering in Aspen,” said Galantic. “We also have the ability to attract new customers. Experiential hospitality and extending to a local community is what we’re doing. Aspen is such a great seasonal destination with so many of our existing and potential future clients.”

The ephemeral store covers lots of product ground. “It’s a pretty full assortment with a selection of ready-to-wear, shoes, handbags, watches and fine jewelry. The store will have the fall/winter collection we presented last March in Paris. The new J-12 will be highly featured,” Galantic said, referring to the first major update to the J-12 since it was introduced in 2000. A selection of black-and-white ceramic rings from the Ultra Fine Jewelry collection will be displayed in a specially designed jewelry box, and costume jewelry will also be available.

Accessories were made for flaunting on the slopes and include, ear muffs, hats, scarves and gloves – all with black double C logos on white or vice versa.

Chanel has something for consumers on both sides of the fur debate. Versions of the Flap handbag made of faux fur, camera cases in braided shearling, and a miniature gondola handbag decorated with rhinestone resin. There’s also the Chanel 19 Maxi flap handbag in beige and black tweed with a gold-tone and silver-tone strap, and a white goatskin version with gold and silver-tone strap.

“The product selection is created through the lens of the Aspen customer,” Galantic said. Asked whether Chanel would ever again open a permanent store in Aspen, the ceo said, “I’d never rule out the idea of doing something seasonally. I don’t see us opening year round.”