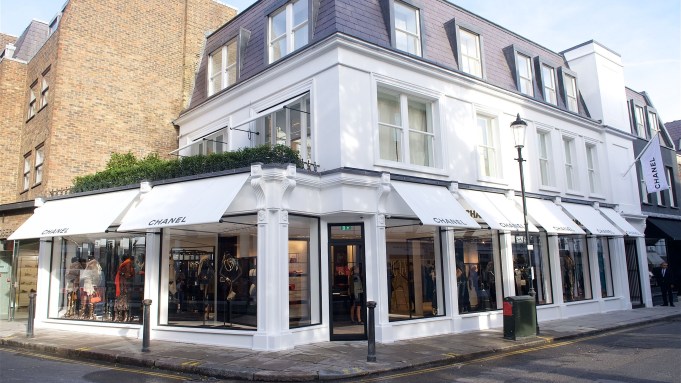 LONDON — Chanel’s accent is becoming ever more British with plans to shift its corporate base to London, its purchase of Orlebar Brown and the opening of a town house-like store at the crossroads of Chelsea and South Kensington.

The new 8,100-square-foot store is just a few steps away from Chanel’s former unit in a neighborhood known as Brompton Cross, but this new location is far more private — and quiet. Located on the corner of Walton Street and Draycott Avenue, the new Chanel sits near the Joseph multibrand store, Golden Goose and the recently opened Daylesford organic farm shop and café. MSGM, Caramel, Stella McCartney and Ralph Lauren are a short walk away.

Spread over three floors, the store has been built to invite, not intimidate, and aims to cater to cosmopolitan, moneyed locals. It’s a neighborhood store, a companion to the Bond Street flagship, which gets a steady flow of tourists.

The interiors, by architect Peter Marino, have been designed with the customer’s pleasure — and needs — in mind. There is a separate entrance on Walton Street for the footwear area while big dressing rooms are bathed in flattering light. Display shelves are open and easily accessible, while chain-handled handbags and scarves dangle casually from hooks placed here and there.

All three floors are flooded with natural light thanks to big windows that have been fitted with custom-woven panels by Lesage, one of Chanel’s specialty ateliers. Carpets, club chairs and sofas have been made in silk and wool tweed flecked with gold thread, while textured walls range from slick and shiny black to rough-edged white.

Vintage furniture and artwork by Jean-Michel Othoniel, Johan Creten, Erik Lindman and Michal Rovner are on display throughout the store, and there’s even an outdoor terrace adorned with topiary hedging and camellia trees that overlooks the Joseph store. The latter also came courtesy of Marino, who did extensive work on the exterior of the Chanel  townhouse as well.

In an interview, Bruno Pavlovsky, Chanel’s president of fashion and head of its Paraffection subsidiary which controls the specialty ateliers, called the store “a Chanel house” and said the aim was to create strong links with the locals and be as welcoming as possible.

“What is most important is that you feel in touch with the product,” Pavlovsky said during an interview at Chanel’s offices in Mayfair, which are set to get bigger soon when the company takes over a 20,000-square-foot space on nearby Bruton Street.

“It’s a small boutique. Accessories are on the main floor and shoes have a specific entrance because we have customers who want to come mainly for shoes. Shoes are also a very good product area to recruit and attract a new generation of customers, so that’s exactly what we are doing here,” he said.

Upstairs, the first floor offers more accessories — handbags, eyewear, jewelry — while the top floor is dedicated to ready-to-wear. Each level has its own living areas dotted with tweed sofas, soft leather pillows and coffee tables. Some customers may never want to leave.

“The objective is that you feel comfortable touching the product, seeing the product. You have to feel very free, free enough to want to try them on,” Pavlovsky said.

The new London store is one in a series of openings and re-openings this year.

On Nov. 15, Chanel’s New York store on 57th Street will reopen, while on the 19th, an expansion on the Rue Cambon in Paris is to bow.

November will also see the reopening of stores at Shanghai’s IFC shopping center and in Kuala Lumpur. Openings are planned in Hong Kong, Japan and Courchevel, France. In December, Chanel units will land in Taiwan, India and Dubai while Chicago will open on Jan. 15.

Asked about Chanel’s recently inked partnership with online e-commerce platform Farfetch, which is aimed at improving the customer experience, Pavlovsky said it’s still early days and that changes wouldn’t be evident for at least another 18 months.

“It’s still too early to talk about it, but our main objective is to enrich the customer experience, to make the relationship with the customer easier and to respect what each customer wants — because not all customers want the same thing. We want to fine-tune exactly how to communicate with them. The objective is to create something new — and we’re not going to rush things.”

Pavlovsky also talked about some of the reasons behind Chanel’s decision to transfer its corporate headquarters to London — a bold move given the uncertainty around Brexit and all that could go wrong with Britain’s future trade deals. At the same time, British Prime Minister Theresa May has also promised lower taxes — and, specifically, the lowest rate of corporation tax in the G20 — as well as a robust pro-business stance post-Brexit.

“For us this is business as usual,” Pavlovsky said. “We are here, and Britain has always been one of our key countries. That is nothing new. We also do a lot of implementation testing here in fragrance, beauty, watches, fine jewelry and fashion. So we’ll continue to work as we have been. We also have many customers in London, people who are living here, but also a lot of international customers. London, along with Paris, New York, Shanghai, Beijing, Seoul and Tokyo, is one of our key cities in the world.”

He said the Brexit questions apply to everyone. “The most important thing for us is that, Brexit or no Brexit, we continue to do our business as we are doing it today. We want to protect that.”

Chanel isn’t the only big corporate that’s taking a fresh look at London. A week ago, Unilever’s major institutional shareholders forced the company to nix a plan to move its corporate headquarters to the Netherlands. Unilever has a dual structure that sees it based in London and Rotterdam, and shareholders want it to stay that way for a variety of reasons.

Chanel dug deeper into the U.K. earlier this month with the purchase of Orlebar Brown, the men’s swim and resortwear company. Pavlovsky said he likes the fact that Orlebar Brown is a digitally native company and a men’s wear specialist.

“The idea is to see what kind of synergies we can imagine for the future, although the most important thing is that each of our brands remains distinct and continues to develop in its own context,” he said.

Asked about Chanel’s appetite for future investments Pavlovsky said he’s always open to new opportunities as long as they’re in keeping with the company’s ambitions to build brand equity.

“In this world we cannot stop. I think we have a clear objective for Chanel, which is to prepare the brand for the future, and at least for the next 20 years. We are business people, and the brand equity, the value and perception of the brand, is our most important KPI [key performance indicator] for the future. Chanel is a major name, a major brand, and we need to keep it strong,” he said.

The company is stronger than some of its peers that are publicly quoted or belong to big conglomerates. According to Interbrand’s 2018 Best Global Brands report, which pins a monetary value on a host of global companies, Chanel ranks at number 23, between Louis Vuitton (18) and Gucci (39). Interbrand estimates Chanel’s brand value to be in excess of $20 billion, or about double the French company’s 2017 sales.