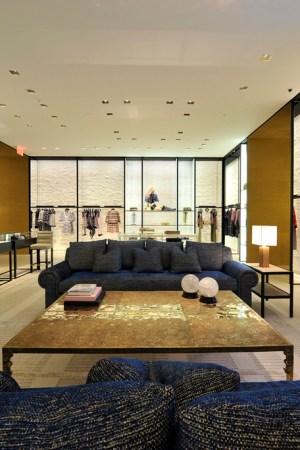 The 25-year-old boutique has undergone minor renovations since its opening at the Orange County shopping center, but this represents the most complete body of work, according to division president of fashion Barbara Cirkva.

“You have the Peter Marino concept when he first started using Coco Chanel’s apartment as reference and the idea of using materials she used…but as the concept has evolved, what’s been important to us is each region has its own personality,” Cirkva said. “So South Coast Plaza looks different than San Francisco because San Francisco is more of a downtown city and it looks different than Robertson, which has its own personality…. It’s not a cookie-cutter approach but a much more regional approach.”

That meant infusing the ocean into certain parts of the boutique, such as the wave pattern on some of its walls. But aspects such as rock crystals and touches of gold throughout ring true to Chanel’s apartment.

The boutique added about 2,000 square feet and now totals 9,000 square feet in the center’s Nordstrom wing, which is surrounded by Tiffany & Co., Hermès and Dior. Chanel had been operating in temporary space at the center since construction began in July of last year.

The additional space created room for a full line of fine jewelry, watch boutique and an expanded ready-to-wear area along with the build-out of a dedicated shoe department. The Mademoiselle Privé Camélia watch launched exclusively at South Coast Plaza.

Dressing rooms have touchscreens built into the wall, allowing customers to control the lighting, temperature and music inside their space.

The South Coast redesign follows Houston, which opened in December.

There are also other refreshes taking place among the company’s locations in department store shops-in-shop — a portfolio totaling 91. Neiman Marcus Chanel locations in San Diego and Beverly Hills along with Nordstrom in the Westfield Topanga mall are all set to see refreshes in the next few months, according to Cirkva. A new boutique is also in the pipeline and could be revealed in as early as a month.

It’s a multitude of projects as Cirkva wraps up her final year at Chanel and will likely take up the bulk of her remaining time along with global projects as a member of the leadership committee, she said. And there’s also the matter of helping the company with its search for her successor, she added.

“I have another 12 months to make it all happen,” Cirkva said.

The company revealed her planned exit earlier this month. As for what’s next, Cirkva said she hasn’t even begun to explore her options.

“I have a long time to think about that,” she said.