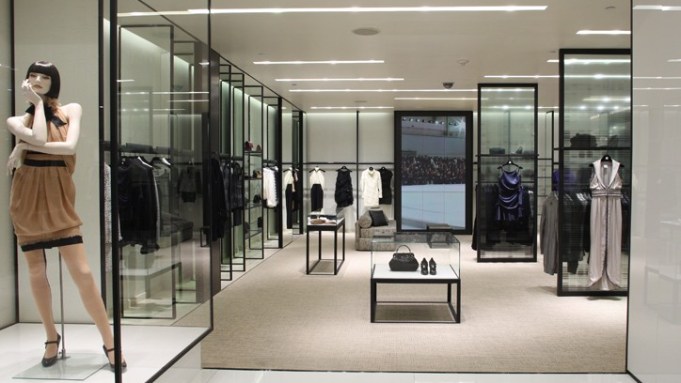 For Chanel, an institution in Paris, New York has always been the second city.

Now there is a readdressing of that balance as new shops, counter innovations and renovations are being channeled to key retail accounts in New York, including Saks Fifth Avenue, Bergdorf Goodman and Bloomingdale’s.

“In New York, we intend to achieve the same dynamic status that Chanel has in Paris,” said Barbara Cirkva, division president of fashion, fine jewelry and watches at Chanel Inc., who was part of the Chanel entourage at Saks on Tuesday morning previewing the new landscape.

The program includes a flourish of makeovers that are required, given the growth of the business in the U.S., and the impact of Chanel’s artistic director, Karl Lagerfeld.

And, in this difficult economic environment, retailers are more eager than ever to get a proven collection like Chanel on the selling floor. The brand remains a star, regularly racking up record trunk show figures, notably $6.1 million at Bergdorf’s in May 2006.

The push is most evident at the Saks flagship, which, in the past week, unveiled a trio of Chanel shops, including one for ready-to-wear. The event practically marks fashion history, considering that rtw has been absent from the Saks flagship for two-and-a-half decades and is a glaring void in the store’s designer offering. Chanel also becomes a centerpiece of Saks’ ongoing third-floor renovation, which encompasses 35 other fine designer apparel shops.

The 2,080-square-foot shop includes 1,200 square feet for rtw and accessories, five fitting rooms and, along with the signature black trim, has two glass cubes to display mannequins. As part of the Chanel renaissance at Saks, artisans from the embroiderer Lesage, feather maker Lemarie and shoemaker Massaro will be at the store through Friday demonstrating their craftsmanship. The rtw shop was a collaborative effort among Saks, Chanel and architect Peter Marino, who designs boutiques for Chanel around the world.

The walls are covered with luminous woven fiberglass, and the millwork panels are made of carbon fiber with threads hand-pulled, exposing gold leaf beneath. The furniture is covered with Chanel tweeds and the carpet is splashed with an abstract pattern of metallic crosshatching. A 10-foot-high video features the Paris runway shows.

There’s news, too, on the main floor of Saks, where a prototype 850-square-foot fragrance and cosmetics shop is up and running. The shop is 280 square feet larger than the previous one and Saks says it’s the largest of any on the beauty floor. The shop also could be regarded as unique. Unlike typical cosmetics installations constricted by a perimeter of straight case lines, Chanel’s is curvilinear and open, for easier interaction with the beauty experts and advisers and products. The space also is designed with a nod to Coco Chanel, with pictures of her and her Paris salon, elegant quilted glass lamps and tweed patterned mirrors, and narrow frosted glass fragrance counters. There’s a patented olfactive bar with a ceramic blotter system on a table housing 43 fragrance concentrates. Customers just lift up the blotters, which are in vials. This means spraying is not required and one is able to get a better whiff of the product. “This allows you to have a very pure olfactory experience, more than before,” said Christine Dagousset, executive vice president of Chanel beauty and fragrance.

There’s an illuminated interactive manuscript of the history of Chanel fragrance, whereby the pages turn via a motion-detecting sensor. Saks also has an exclusive on Beige, a new floral fragrance, and also will offer 250-ml., 450-ml. and 900-ml. bottles of the iconic No.5 parfum previously available only by special order through Paris.

On the makeup side, there’s a private consultation room for makeup and skin care with a “miroir lumiere” or light box mirror, with adjustable lighting to simulate day-to-evening lighting in different seasons; eight makeup stations, and two seated skin care consultation areas. The space has a total of 850 square feet for beauty and 200 for fragrance, representing a gain of about 300 square feet for Chanel.

The brand’s third new shop at Saks, a 993-square-foot corner for the accessories, has some of its own special touches, such as a mechanized dumbwaiter to retrieve product from storage. The old shop was about 300 square feet smaller and dominated by leather goods, while the new space is an opportunity to highlight other accessories such as costume jewelry and belts.

But as impressive as the Saks shops are, they represent only part of Chanel’s stepped-up presence in Manhattan.

At Bergdorf Goodman, following last spring’s renovation of the beauty and fragrance shop, a 750-square-foot shop on the main floor for handbags, jewelry, small leather goods, sunglasses, scarves, gloves and hats opened Friday. On Sept. 18, Bergdorf’s will start a VIP trunk show of one-of-a-kind Chanel costume jewelry by Gripoix, and another for exotic and vintage bags, including a diamond-embellished alligator bag priced at $270,000. Invitations to top local clients will arrive via a Bergdorf pedicab.

Chanel is going even further to elevate its already-high profile by commissioning Mobile Art, an exhibit that will be housed in a futuristic pavilion in Central Park off Fifth Avenue and 69th Street. The pavilion, which made its debut in Hong Kong earlier this year, was designed by architect Zaha Hadid and is filled with contemporary art, reflecting Chanel’s view of itself as a cultural enterprise, not just a fashion business.

And the program continues next year, when Chanel starts a redesign of its SoHo store in New York, and re-creates accessory and beauty space at Bloomingdale’s 59th Street location, which is overhauling its entire main floor in phases.

“With Karl, there’s a fast pace of change and always the look of the moment. We have to make sure we keep up with that,” Cirkva said.

“In the big cities, where we have the most customers, we should look amazing. That’s our approach,” added Dagousset. “New York is our biggest business, but we’re looking at all big cities” to enhance the business. Chanel’s second-biggest-volume city in the U.S. is Los Angeles, where a store on Robertson Boulevard opened in May. The Rodeo Drive store was renovated last year.

Back at Saks, John Galantic, Chanel’s president and chief operating officer, was thinking exclusivity. “The expansion of Chanel within the Saks Fifth Avenue flagship offers customers exclusive and unique environments. Our rich heritage, modernity and dedication to offering the ultimate luxury experience are reflected in these new installations.”

It wasn’t always that way. Twenty-five years ago, Chanel “had gotten a little dusty,” recalled Ron Frasch, president and chief merchandising officer for Saks. “Back then, Saks had a huge Chloé business designed by Karl.”

In the Nineties, when Saks wanted Chanel rtw to return to the flagship, it was Chanel’s turn to say no. “They were absolutely hesitant, and I’m not sure they were wrong. We had a lot of work to do, propping up the rtw, the handbags and the shoes in key markets, though the beauty side was never a challenge. It was mostly a fashion [issue],” Frasch said. “We had to prove to them we could sell the product with the appropriate velocity and sell-through.”

Under the new regime led by Frasch and chief executive officer Stephen I. Sadove, Saks for the past several seasons has been upgrading its merchandising and performing better with Chanel and other designers. Tourism to New York and the weak dollar relative to the euro have been huge factors, too.

With all that, Galantic and Cirkva were encouraged to come to the table. “We told them we would make Chanel a centerpiece of the renovation of the third floor,” Frasch said. Giorgio Armani, Marni, Marc Jacobs and Chloé opened in recent days on the floor, as well. Gucci opens late this month and Jil Sander is scheduled for November, but Chanel is situated most visibly right off the escalator. It’s also got more space than other designers.

“Chanel really positions us the way we need to be positioned — as a fashion authority in New York,” Frasch said, noting that Saks sells Chanel rtw in 19 other doors.

Chanel offers “amazing novelty and fantastic knitwear, which always perform for us,” Frasch noted. The core of the business, he added, remains the suiting, which is interpreted in a special manner every season, such as those in distressed tweed that opened the fall runway show.

There are also sweater coats with hand-crocheted ruffle details on the collars for $3,490, and knit dresses priced at $1,835.

“There are always key items we can sink our teeth into and drive a lot of volume. It’s very unique among designer businesses,” Frasch said of Chanel. “It can’t be put into a predictable package. There’s an incredible sixth sense to Chanel — about what’s going to be right.”

Cirkva doesn’t feel that the growth at Saks and other stores will cannibalize the freestanding Chanel stores. “Probably the biggest pressure I felt was from our 57th Street store, but if you are careful about the quality of your distribution, then it’s not an issue,” she said.

Wholesaling hasn’t declined with additional freestanding stores in Manhattan. “We forget how regionalized the city can be. Eighty percent of the people that shop Chanel on 64th and Madison did not shop the 57th Street boutique,” she said. “The 57th Street store gets a much broader mix of tourists. And there is no question Saks Fifth Avenue gets a Midtown crowd,” meaning a mix of tourists and those who live or work in the area.

“Chanel has always been about the total look. [Coco Chanel] really invented that concept, and Karl gives new dimension and vigor to that whole idea,” Cirkva said. “Not to have the rtw at Saks when we had the accessories, shoes and watches really was a bit off strategy.”