The largest apparel trade show in the U.S. is evolving to create a more seamless experience between its multiple shows. 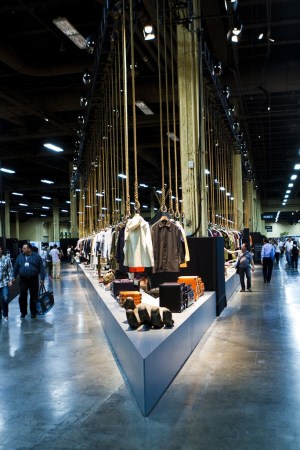 Visitors to the MAGIC men’s show in Las Vegas next week are in for some important changes.

The largest apparel trade show in the U.S. is evolving to create a more seamless experience between the multiple men’s shows that fall under the MAGIC umbrella, which include Project, S.L.A.T.E., Mens/Wear, Street, Pool and Workroom. Signage will be uniform throughout the show and has been overseen by the Project team, bringing that show’s streamlined, modern aesthetic to all areas of the Mandalay Bay Convention Center, home MAGIC’s men’s shows.

Certain size and height restrictions have been placed on vendors’ booths, as well as noise restrictions, to create a unified environment.

“The goal is to create a single marketplace inside the Mandalay Bay, with multiple categories within that marketplace,” explained Andrew Pollard, president of Project, who has been given additional responsibilities overseeing the other men’s shows in the Mandalay Bay. “We want to create a more uniform look and feel to the entire experience and it happens to be the look and feel of Project. There will be more synergy between upstairs and downstairs.”

While much of the changes are cosmetic this season, the moves are a precursor to a major overhaul and restructuring of MAGIC planned for the August show.

In one example of the new synergies between the various shows, the Project 10 showcase will be moved upstairs to the S.L.A.T.E. show. Originally launched in 2010 at Project to highlight 10 young brands on the rise, this season Project 10 will focus on emerging skate and cycling brands. Participating companies include Affinity Cycles, The Ampal Creative, CBNC, Corpse Corps, FTC, Fuct, Only NY, Ssur, Western Edition and Wheelmen & Co.

Additionally, Project’s blogger lounge initiative has expanded to S.L.A.T.E., which will bring in a cadre of influential bloggers to cover the show. Participants include Highsnobiety, Freshnessmag, Nicekicks, Upscalehype, Ctothejl and Karmaloop TV. A separate group of bloggers will be dedicated to the Project show.

“Bloggers have been able to open up Project directly to consumers and we wanted to expand that to S.L.A.T.E.,” said Pollard.

The S.L.A.T.E. show has been moved front and center on the upper level, moving the Street show to an adjacent space. On the lower level, Workroom has been moved from its traditional spot on the side of the main entrance to a central space between the men’s and women’s wings of Project. A footwear showcase at Project has been moved into the side space previously occupied by Workroom.

The S.L.A.T.E. show will be abuzz with live skater activity, with a mini-ramp exhibition hosted by Super Heat and a long ollie challenge sponsored by Maloof. Singer Lauryn Hill will perform at a S.L.A.T.E. opening night party at the House of Blues on Feb. 13.

This season, Project will host the second edition of Project Wooster, a curated spotlight on innovative, global brands as chosen by Nickelson Wooster, the former Bergdorf Goodman men’s fashion director. This season, the showcase is focused on Japan, with about half of its 42 total brands hailing from that country.

“The Japanese have a special ability to study something and interpret it and make it more authentic and modern than anything that came before it,” said Wooster. “There’s something really interesting happening in Japan, but only a handful of specialty store buyers go there. We wanted to show a large American audience what is happening on the other side of the world.”

Among the Japanese brands on display will be Rocky Mountain Featherbed, Nepenthes, United Arrows, Post Overalls and Visvim. Non-Japanese brands at Project Wooster will include Duvetica, Herno, Nigel Cabourn, Tricker’s and Holden.

Project Wooster is intended as a creative showcase and the participating brands do not actively sell their lines at Project. However, in a new aspect of the program, Wooster has designed special collaboration product with nine brands, including Orlebar Brown, The White Briefs, Hamilton 1883 and Globe-Trotter. Those products will be available for wholesale in limited runs.

As participating brands do not pay to join Project Wooster, the platform also serves as a pricy marketing tool that helps position Project at the forefront of global trends and brings leading-edge brands to Las Vegas. The effort is part of Project’s strategy to become more than a simple stage to buy and sell next season’s merchandise, but a showplace for the exchange of ideas, inspiration, innovation and entertainment, explained Pollard.

“We want to bring into our marketplace a sense of curiosity and discovery and create a really incredible experience,” said Pollard, who has added features like full-service photo studios to the New York and Las Vegas shows, as well as the Made by Project program highlighting hand-made, artisanal product. “Retail has changed, the world has changed and trade shows have to change.”

The MAGIC shows, including Project, will launch a digital initiative later this year to bring buying and selling, education and industry programming to the marketplace 365 days a year.

“We don’t want to be in business for just six days out of the year,” noted Pollard.