The flagship men’s wear show in Las Vegas got a facelift this time around. 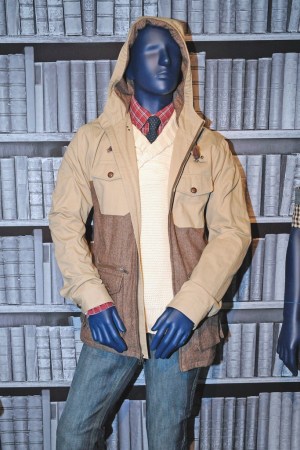 LAS VEGAS — What a difference six months can make.

Buoyed by strong holiday sales that have continued into 2012, retailers shopping the trade shows here this week were upbeat about the future. Although still wary of the uncertain macroeconomic landscape and keeping a close eye on their open-to-buy budgets, they nonetheless came prepared to spend.

“Overall, things looked strong and distinctive,” said Eric Jennings, men’s fashion director at Saks Fifth Avenue. “In the past, there were a lot of similarities.” He especially liked the cleaned up, “very masculine looks,” as well as brands offering “an outdoorsy spin.”

“This is a very important denim show for us,” Jennings added. “We really roll up our sleeves and get into it.” At the same time, the tailored offerings were also intriguing, as vendors capitalized on the dress-up trend. “There’s a continued mind-set toward wearing tailored, not for the office, but because it’s cool,” he noted.

Matthew Singer, the new men’s fashion director for Neiman Marcus, agreed. “Everything is getting a little dressier,” he observed, noting all the “soft, unconstructed jackets” in the market. He said items such as these are good “baby steps for the contemporary guy who wants to dress up.”

At the shows, which included MAGIC, Project, ENK Vegas, MRket and Capsule, Singer singled out Ian Velardi, Todd Snyder and Billy Reid as indicative of the “smaller designers who are coming into their own.”

Ken Giddon, president of Rothmans, said, “Clearly, the tone is much better. From the vendor and the retail side, things are significantly better than a year ago. I think people are just tired of being down.”

He said he was shopping the show to “find sizzle” for the opening of his new store in New York on March 1. Small leather goods, T-shirts from Altru Apparel, the Todd Snyder collection, Onia swimwear, Ted Baker, Vince and Scotch & Soda were standouts in his mind. In the tailored arena, Tallia Orange and Tahari were highlights for Giddon.

Mario Bisio, owner of the Mario’s stores in Seattle and Portland, Ore., said he was concerned about higher prices but that business was growing postrecession. “Nobody is shopping like they used to, so you have to reward your customer for visiting you. The question is how hard to push our buys. I’d like to see more replenishment programs for core categories, so that we can focus on the things around the core.”

Butch Blum, owner of the store that bears his name in Seattle, said 2011 was “ a pretty good year. We learned how to make money again.” And, although spring hasn’t really kicked in yet, he’s hoping the momentum continues into this year.

At the shows, he was shopping for sportswear at “friendlier price points to get more younger men into the store.” Hybrid blazers, soft jackets, cardigan sweaters and jeans alternatives were expected to do the trick, he said.

The flagship men’s wear show in Las Vegas got a facelift this time around, providing a new energy to what had become a lackluster experience the past few years. Signage that mimicked the popular Project show made its debut at the MAGIC men’s wear venue, offering a more uniform feeling to all of the company’s trade shows within the Mandalay Bay Convention Center complex. Although not every segment of the men’s show had been overhauled, the updates are a clear signal that Advanstar Communications, owner of MAGIC and Project, is committed to improving the experience for the 7,000-plus brands and thousands of retailers who flock to Vegas twice a year to attend its shows.

The mood at MAGIC was decidedly upbeat as vendors and merchants embraced the uptick in business they had been experiencing since last year.

Chris DeMoulin, president of MAGIC, said the men’s shows added roughly 1,400 new exhibitors, and retail preregistration was up in the midsingle digits, indicating that “retailers had a positive Christmas season and are bullish about fall. All signs are extremely positive and the mood at the show is very enthusiastic.”

Several venerable names in the men’s business offered updates for the fall season, mining their heritage to capitalize on the movement that continues to positively impact the men’s wear business.

Generra, which debuted three decades ago as a young men’s brand based in Seattle, showed off its “American prepster” offerings for fall. “We relaunched the brand for spring,” said Dan Shamdasani, chief executive officer of Public Clothing Co., which owns the label. “We have a 30-year heritage in American classics and the idea was to mine that heritage and reintroduce the brand with a modern attitude.”

Shamdasani said the label has been designed to hang together as a collection, but offers “items that can stand by themselves.” Among the top pieces are shawl sweaters, preppy jeans, fitted rugbies and updated woven shirts.

He noted that while the label is just men’s and young men’s right now, the plan is to eventually expand into women’s, children’s and accessories as well.

Haggar, another classic name in men’s wear, has also continued to add to its merchandise offerings for fall with new aspirational products and updates to its core line.

Its booth was set up in a series of vignettes that clearly distinguished its brands. First up was Haggar Heritage, a more elevated line exclusive to Macy’s, which offered hand-sanded cords and brushed cotton slacks with updated details. The Work to Weekend offering, which Jon Ragsdale, senior vice president of marketing and merchandising, called the “workhorse” of the brand, has expanded beyond its khaki roots into cords, twills, chinos and related tops. “Our established customer wants newness too,” Ragsdale said, noting that the packaging for the label has been updated as well to make it more modern.

The same holds true for the company’s dress pants offering, which had a 63 percent increase in sales in 2011, according to NPD Group data, Ragsdale said. The eco-friendly polyester pants are now being offered in a straight fit. The related Haggar Tailored offering of sport coats and suit separates has also been updated to look more modern, he said. “They’re slimming up, but not inappropriately,” he said. Many of the jackets are designed to be worn with jeans with their updated details such as throat latches and ticket pockets, and there was even a washed canvas option.

Cool 18, a microfiber pant, has updated its packaging as well to call out the attributes of the product, such as its moisture-wicking, noniron features. This product has been extended for fall into a C18 concept targeted to a more athletic customer. “It’s athletic-inspired clothing you can wear everyday,” Ragsdale said.

Haggar’s Life Khaki collection has expanded its color options and has added corduroys as well this season. And finally, the company introduced its 1926 Originals collection, which is “more aspirational and modern” for moderate department stores. It features finer fabrics, updated waistbands and details and will retail about $15 more than the core product. “It’s a great extension for us,” he said.

At Dockers, the big push was “the continued development” of the company’s Alpha Khaki, according to Doug Conklyn, senior vice president of global design. More colors and washes and a “continued evolution” of the slim fit has really helped increase sales, he said. “Slim and straight-fitting khakis continue to be an important part of our business,” he said, “and we love how the modern fit of our Alphas bridges the gap perfectly between jeans and khakis.”

Conklyn also singled out the “color, pattern and styling development” of the brand’s performance khakis, which include everything from stain- and wrinkle-resistant product to “hidden mobile device pockets and discreet comfort waistbands.”

A new addition to MAGIC was Italian watch brand Officina Del Tempo which brought a midpriced option to the timepiece market.

“Our concept is to offer well-designed watches at a medium price point,” said Yanir Gvirtzman, ceo. “They retail at an average price point of $650, which works well at high end men’s stores.”

Some of the models offered leather bands as a point of differentiation and all have Swiss or Japanese movement. “The design catches your attention and the price means it’s below the spouse threshold,” Gvirtzman said. “You don’t have to ask permission to buy one.”

At the S.L.A.T.E. section of MAGIC, which is home to the assortment of progressive streetwear labels, Orisue showed its fall collection, which it called Brave the New Frontier. Josh Stinson, apparel designer, said the offerings are targeted to professional guys who also want to look good.

Key pieces included a two-tone coat in a brushed cotton twill with a printed lining and leather trim, retailing for $139. “We’re very price conscious,” Stinson said. Other top items included a shawl collar, speckled knit sweater with contrast wooden buttons; a peacoat with contrast ribbing on the lapels and pockets and a sport coat-style vent on the back. A “ranger vest” in a camo fabric, lightweight transitional plaid shirts and “architect” pants were also on display.

Omit, a line owned by LRG and designed by professional skateboarder Chris Cole, showed its collection of young men’s looks that offered trend-right sportswear designed for the skateboarder. Pat Heid, head of marketing, said the canvas pants offered a distressed wash with stretch attributes and no rivets. There was also a version with a sprayed black exterior that is designed to fade as they’re worn, as well as waxed chinos and a wide range of printed T-shirts with Americana-inspired graphics. Heid said the brand is sold primarily in skate shops, but is now crossing over into the urban market.

The newly launched Valor collection of apparel from Ryan Rush, a veteran of O’Neill and Ezekial surf brands, used the show to offer its “progressive young men’s” fashion label. Top looks included a hooded hip-length fake leather jacket with waist and cuff ribbing and a jersey lining, fleece varsity jackets, lightweight chambray jackets with military details, and woven and knit shirts in engineered stripes. A key part of the collection were the Land & Sea shorts, which featured open-scale plaids and novelty solids that looked like ordinary walk shorts but could be worn to swim as well.