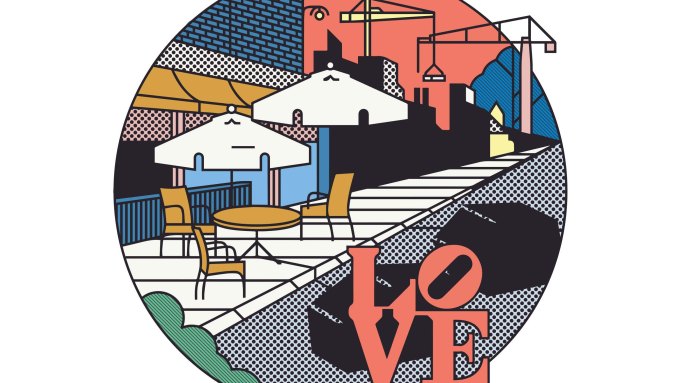 To the chief executive officer of one of the nation’s largest real estate firms, the booming population in Philadelphia can be explained in terms of sidewalk cafés: Cafés filled with young people, he contends, tell the tale of the changes in the City of Brotherly Love.

“In 2001, there were only a handful in the city,” said Joe Coradino, ceo of Pennsylvania Real Estate Investment Trust, or PREIT, which owns seven malls in Greater Philadelphia and 26 worldwide. “Today, there are 370. That’s a proxy for the growth of Millennials and other residents who want to live, work and play here.”

In the past five years, Philadelphia has exploded with retail and residential development, so much so that it’s hard to keep track of the multitude of cranes that fill the Center City sky. By 2018, more than 2.8 million square feet of retail will be added in the city.

Why is Philadelphia more appealing now?

“Most people have a frame of reference in Philadelphia that goes back a decade that includes Rittenhouse Square as the epicenter of wealth in the city,” said Coradino. “Now the wealthiest neighborhood is the Washington Square area. The money has shifted from west to east.”

Thank visionary developer Tony Goldman for that. He came to town at the end of the Nineties and saw potential in Washington Square, taking it from seedy to swanky. The area, called Midtown Village, is where the dollars are. Most recently, adjacent pockets near Washington Square and closer to historic Independence Mall are being snapped up by developers for mixed use. In walking distance from the square, there are seven major developments under way, adding more than 1.9 million square feet of retail and representing a $715 million investment east of Broad Street.

An influx of out-of-town investors are finding Philadelphia’s prices more approachable than New York or Washington, D.C. “The east side property values are lower, so the ROI rate is better now on the east side,” said Catherine Timko, retail consultant with the Riddle company, who helped the team at the Center City District position the city to investors.

“The dramatic change in retail rents reflects a change in the quality and character of retailers locating in Center City,” said Paige Jaffe, first vice president at CBRE. “Larger-size retailers such as Target and Mom’s Organic Market are going east of Broad. Ath-leisure tenants like Under Armour, New Balance and Lululemon are paying the high rents of Walnut Street west of Broad.”

The other thing that made Philadelphia attractive was the growing and changing consumer. According to Campusphilly.com, of the 300,000 college students who study in the metropolitan area, 64 percent are now staying after graduation to live and work (companies with offices in the suburbs are looking to open satellite offices in the city to attract the best talent). Empty-nesters are also ditching the suburbs for this culturally rich, walkable city, and residential has had to keep pace. There are 4,100 units under construction in town. All of these factors have created the perfect storm for investors. “Center City skews twice the national average of Millennials. The missing link was retail,” explained Coradino.

Of the people who are now calling the city home, incomes are up. According to a report by CBRE, in the past 15 years there has been a 288 percent increase in households making more than $500,000. The average Center City household income is $111,034. “When we first started going to investors with these numbers, they said, ‘Why haven’t we looked here before?’” said Michelle Shannon, vice president of marketing and communications at the Center City District. “Investors and developers say Philadelphia is a bargain compared to other cities.”

Several national tenants who cater to Millennials are seeing some of the highest sales per square foot in Philadelphia out of their portfolio.

In 2014, Coradino, PREIT and California-based Macerich invested $325 million in the redevelopment of the Gallery mall, which dates back to 1977 and will be renamed the Fashion Outlets of Philadelphia (Market Street between Eighth and 11th). Its first anchor tenant, Century 21, has taken over in the former Strawbridge’s flagship adjacent to the mall. It was the first out-of-New-York location for the retailer. FOP will feature 125 retailers, including additional flagships, outlets, artisanal dining and entertainment, and will open in spring 2018. The new design opens up the old inward-facing Gallery to the outside. There will be more street-level entrances and lots of cafés. “We are thinking about the visitor walking from Independence Mall to the Convention Center. We want it to be inviting,” said Coradino. Flanking the new development is the Jefferson University train station, where 22 million commuters pass each year, and the Convention Center, which gets 10 million visitors and nearby office workers. Across the street, another development, East Market (11th and 12th streets on Market Street), will feature 325 apartments and retail. “There is $2 billion being invested in the neighborhood. In the next 24 months, it will be transformed to a very hot neighborhood.”

National Real Estate Development will expand the Market East retail district and connect it to the vibrant Midtown Village just south of the project. Dan Killinger worked for Tony Goldman in New York in the Nineties. National bought a rare, 4-acre site across the street from the Gallery in 2013 and has invested $250 million in it. East Market will feature two mixed-use towers, a warehouse space with 130,000 square feet of retail, apartments and 161,000 square feet of office space. One tower will open in the spring and will feature a 15,000-square-foot Design Within Reach flagship. The former warehouse next door will be redeveloped into modern office spaces above ground-floor retail that includes Mom’s Organic. The Marketplace Design Center will relocate to this space. “We were interested in investing here because Philadelphia hadn’t had overbuilding like other cities had,” said Killinger. “If you do it right, you create a place where people want to live and work.”

Also under construction is The Collins (11th and Chestnut streets, The Brickstone Group). Just blocks away, (Sixth and Walnut streets) the Curtis Center, the site of the former Curtis Publishing, is being redeveloped with an investment from Keystone Property Group, Mack-Cali Realty and Roseland into luxury apartments, office space and 50,000 square feet of retail space and will house a P.J. Clarke’s, which will overlook Washington Square.

Not to be left behind, Rittenhouse Square has also seen a revitalization and expansion of retail in the past two years from stores mainly on the square and Walnut Street northward to Chestnut. New independent tenants include Skirt, a designer shop with two other Philadelphia locations; indie boutiques Shop 65, ellelauri and Bela Shehu. “The local boutiques are even more important because it makes us different than a mall and makes us more of a regional destination, too,” said Shannon. Add to that Rag & Bone, Michael Kors, Theory and Under Armour. Veteran designer retailer Joan Shepp moved off Walnut to bigger digs on Chestnut Street.

Just off the square, a new $300 million development, 1911 Walnut, will feature residential and 55,000 square feet of retail. It is being spearheaded by Tennessee-based Southern Land Co. At 19th and Chestnut, Pearl Properties is building another residential tower with ground-floor retail including the city’s third Target.

“Developers aim to draw a young workforce to downtown offices using retail as a strategy,” said Casandra Dominguez, manager of business retention and retail attraction, Central Philadelphia Development Corp. This shopper is attracted to national as well as independent retailers. Just four years ago, before the hum of dump trucks permeated the city, the Philadelphia Fashion Incubator at Macy’s, or PFI, opened its design space at its flagship at 13th and Market. It, too, is looking to open a place in which graduates can share retail and office space. This is the next step for grads to have a space to sell from and do market research. “Michelle Shannon and I have wanted to do this for four years,” said executive director Elissa Bloom. “We always wanted to rebirth this fashion sector in the city. In Philadelphia, access for designers to enter the market is more feasible than other cities.”

Catherine Timko will complete a feasibility study and they hope to open this space next spring.

OUTSIDE OF THE CITY

A short drive from the King of Prussia mall is the new King of Prussia Town Center by JBG Real Estate, the largest commercial real estate firm in Washington, D.C. The outdoor, upscale-lifestyle shopping and dining center, in the middle of the Main Line, features 260,000 square feet of shopping, dining and entertainment. It is intended to be a complementary destination to King of Prussia mall, according to Tom Sebastian, co-ceo of JBG. In the works for five years, it’s next to a 24-hour Wegmans and close to 10 million square feet of office space. “Workers are looking for a place to go. People are eating out more.”

JBG created a main street with 17 buildings that will include a Nordstrom Rack, REI and Ulta. Dining is local (Honeygrow, Davio’s and Cityworks) and from the D.C. area (Founding Farmers). “Many are buying online versus department stores,” he said. “People crave experiences to relax.”

The Town Square is a pavilion with live music, movies in the evenings and a wall of fire that illuminates the square at night. Twenty leases have been signed, but the company hopes to fill the remaining spaces with fashion, accessories and home retailers by next spring.