Changing of the Guard at Inditex

The parent company of Zara will see a change in management when founder Amancio Ortega steps down and hands the reins to Pablo Isla. 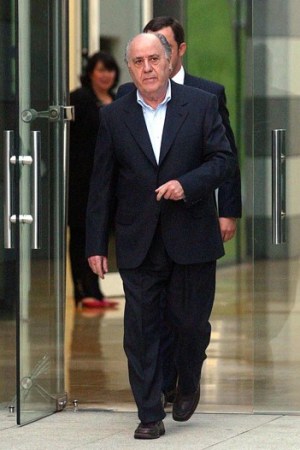 The parent company of Zara, Europe’s largest apparel retailer, will today see a change in management when chairman and founder Amancio Ortega, dubbed “the inventor of the Zaravolution,” steps down and hands the reins to Pablo Isla, who had been the group’s chief executive officer and deputy chairman since 2005.

“Amancio is making another smart move, preparing for the future with similar logic and the same intelligence he has always used to run the company, but I think he’ll remain very close by,” added Linda Heras, international development director of Roberto Verino, a high-end apparel label and geographical neighbor.

Under Isla’s watch, Inditex rolled out more than 2,800 stores with the top priorities being expansion in Asia and Eastern Europe, as well as growing e-commerce.

Pending shareholder approval, Isla will receive a hefty block of shares, worth 13.7 million euros, or $19.6 million at current exchange, as “a welcome gift” from Ortega, a company source confirmed.

About his succession, Isla said, “It is not a drastic move and there won’t be any major changes. I feel enormous responsibility and motivation to strengthen Inditex, and it’s the right moment. The transition will be smooth and very natural.”

Outside Inditex’s corporate inner sanctum, little is known about Ortega except that he’s the richest man in Spain — and the seventh richest (up two notches over last year) in the world, with a net worth of $31 billion, Forbes reported in March. His fortune includes Inditex stock — he has maintained a 59.3 percent stake in the company since it went public in 2001 — and luxury real estate projects in the U.S., Florida in particular, and in such major European cities as London, Paris, Lisbon, Berlin, Madrid and Barcelona. He has additional investments in banks, gas and tourism and owns a horse-jumping circuit and a soccer league.

Ortega is not much for fanfare and personal public relations is not in his DNA. He’s been quoted as saying, “Talk about my company, but not about me,” and he rarely appears in public.

One of the few to penetrate company walls is avant-garde Spanish artist Alicia Framis, whose filmed performance “Secret Strike — Inditex” (2006) chronicled a day in the life of Zara. “Inditex employees were very involved in the film,” Framis said. “Everybody wanted to be a part of it — except Amancio Ortega.”

Ortega’s is a rags-to-riches story. In the early Sixties, he came up with the idea of making basic garments like housecoats and underwear cheaper than anyone else. Production took place on his kitchen table, and the first item cut from cardboard patterns was a quilted pink robe with blue piping. In 1975, he opened his first store here, selling bathrobes for about 50 cents each.

Working from the age of 13 in local men’s wear shops, he had little formal education. “I couldn’t work and study at the same time; it’s that simple. My university was my profession. I wanted to be a different kind of impresario, one with a social conscience,” he told Covadonga O’Shea, onetime director of Spain’s prestigious fashion magazine Telva, in an authorized biography published in 2008.

“His success has not changed him,” O’Shea said. “His values are the same; he’s humble, affectionate, generous, and he loves the people he works with.”

Ortega lives with his second wife, Flora Pérez Marcote, in an apartment in La Coruña, an unpretentious seaside town about six miles from Inditex’s headquarters in the industrial zone of Arteixo. He doesn’t speak English and, according to an employee, “he’s approachable and into everything. He lives the product,” she said.

It remains to be seen how involved Ortega will be in the company he founded, now that Isla is taking over. But the next generation of the Ortega family already is involved: The founder’s youngest daughter, Marta Ortega, was last fall brought into company headquarters, and although she has no concrete job, department or title, she’s in on all major decision making. An Inditex spokesman said her arrival and the pending management succession are unrelated, however. “She will continue her training program, a mix of creative and commercial activities, within the group and, logically [as Ortega’s daughter], she’ll have a role but so far she isn’t officially involved in the company. We don’t know anything about her future.”

Prior to Isla’s promotion, Marta Ortega was considered the heir apparent, and she’s been well groomed for it. With a degree in business administration from London’s European Business School, she speaks four languages — including English, French and Italian — and to date has interned for company stores in London and Paris, with office stints in Asia and Barcelona.

In private, she is an accomplished equestrian, taking part in international competitions with rider-boyfriend Sergio Alvarez Moya — and as socially shy as her father.