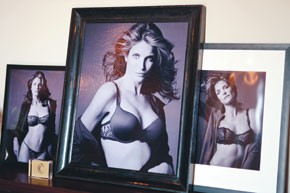 Chantelle Group, the 132-year-old French bra specialist, has aggressive plans to broaden its brand recognition in the global marketplace.

The strategy is threefold: more acquisitions, further retail expansion and continuation of a successful ad campaign that has international appeal with model Stephanie Seymour.

Patrice Kretz, president of the $600 million company, said during a media luncheon last week at the Gramercy Park Hotel in Manhattan that growing the presence of the Chantelle brand at retail, as well as the firm’s two other brands, Passionata and Darjeeling, is a top priority. Part of the plan was set in motion in August 2006 when Chantelle acquired the 65-unit Orcanta chain from French luxury and retail group PPR. Orcanta has annual sales in excess of $63 million.

“We are definitely developing our retail business,” Kretz said. “We carry more than six major [fashion] brands, such as Simone Perele, Aubade, Lejaby, Lise Charmel, Chantelle and Passionata, at Orcanta stores, as well as basic product from Calvin Klein Underwear. In October, we opened four Chantelle test stores for our bra and sleepwear businesses and a brand new business — bath and body products — which have been extremely successful.”

The units cover a variety of locales in France, ranging from Toulouse and Grenoble in the south to Strasbourg and Boulogne, an upscale Paris suburb, in the north.

“We’ll be opening six additional Chantelle stores this fall in Paris and its immediate suburbs,” Kretz said. “Eventually, we plan to develop a retail chain into other countries as well.”

Annual revenues for the family-owned company increased to $600 million last year from $37 million in 1985, when the firm began to expand internationally, Kretz said, adding that 80 percent of overall business is generated internationally.

Seymour, a self-proclaimed “busty 32C,” is the face of Chantelle’s multimillion-dollar “Beyond Beauty” ad campaign that broke in September. The black-and-white print campaign, photographed by Peter Lindberg, has been a “big hit” because of Seymour’s appeal to Chantelle’s core customer in the 30-to-35 age range, Kretz said.

Sonja Winther, managing director of Chantelle’s U.S. operation, said, “The tag line ‘Beyond Beauty’ is the concept with which a woman is able to express her beauty, whether it is internal or external. It’s all about well-being.”

Addressing her affinity for lingerie, Seymour said, “I’m a little bit of an undergarment junkie. I had no idea what my bra size was even though I was under contract with Victoria’s Secret for 10 years, and that’s one of the most common problems with women. Women do not know their bust size. Seven years ago, I went on a Rigly & Peller kick, but I had a hard time finding their product in the U.S. Then I found Chantelle. I was wearing Chantelle even before Chantelle thought of me as a spokesperson. I’m almost 40, so undergarments are a big deal for me.”

Seymour added that when she was a Victoria’s Secret model, she eventually declined to take part in the runway fashion extravaganzas.

“For the first [VS] show I refused to wear lingerie, so I wore this Chinese-looking nightgown with a slit,” she said. “When you have naked flesh walking down the runway, that’s a whole different ball game than modeling in catalogues.”