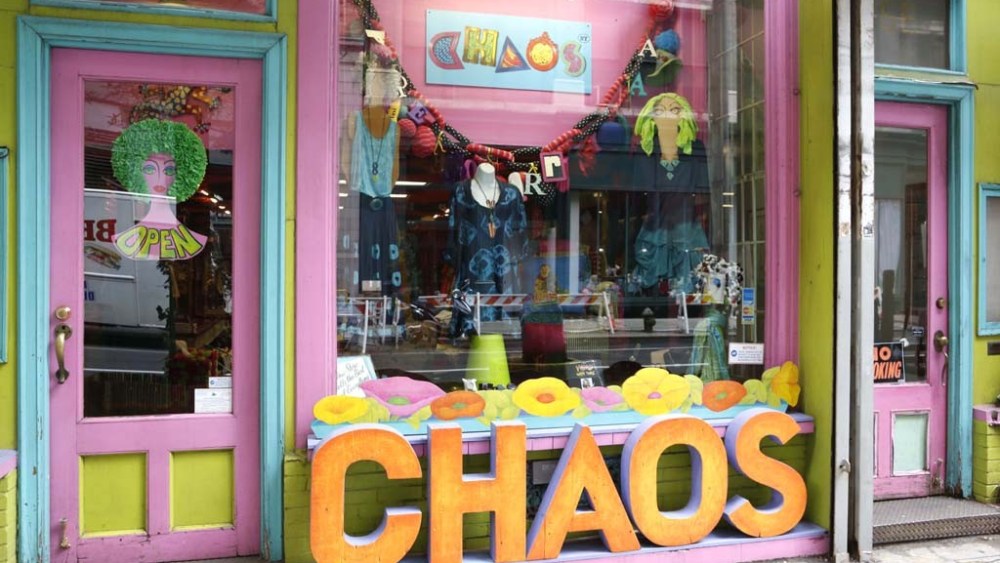 Chaos lives up to its name.

The store, on 20th Street between Park Avenue and Broadway, is a mad mash-up of apparel, footwear and accessories, a jumble of jewelry, scarves and hats.

All this and more is crammed into a 1,000-square-foot space bursting with color and texture. Walls are covered in artificial grass and painted bright red and orange. A hodgepodge of plaques and paintings by outsider artists hang on the walls. Yellow caution tape is used as a design element, and a papier-mâché installation snakes its way down the banister. Dressing-room curtains are simply colorful T-shirts strung together, and clothing racks sport valances of women’s faces, each with a different skin color and hair type. Old 45 rpm records are used as gift cards.

It’s all the vision of Patricia Grace Stevens and Elena Agostinis Patterson.

The two met when Stevens owned a store in Bronxville, N.Y. Patterson, a longtime customer, was spearheading the Tannersville Paint Project, which painted homes and businesses in vibrant hues. Patterson asked Stevens in 2006 to consider opening a store in Tannersville, N.Y., because “it was getting a lot of publicity due to the paint project, and we thought it would be nice to have a store there.” Stevens agreed, and the partners opened Peoria Emporium. They sold the store in 2009 and decided to try their concept in Manhattan.

After Chaos opened, scaffolding — that scourge of retail — was erected around the building, obstructing views of the store. Foot traffic was dwindling. Patterson wrote a letter to former mayor Michael Bloomberg, urging him to tax those responsible for the scaffolding and put the money into a fund to help mom-and-pop shops. She never got a reply.

In spite of the scaffolding, Chaos took on a following. Iris Apfel, the 92-year-old style maven, shopped in the store. “We’re like the Anthropologie for the 50-and-over woman who might not find something that fits elsewhere,” Stevens said. “We get some younger customers, but the over-50 woman who wants to look artistic and original is the core shopper.”

Rather than cropped tops, Chaos offers tunics with short panel overlays. In place of miniskirts, there’s longer lengths and maxi dresses. “We like very comfortable, casual things, but we also have rather elegant things,” Patterson said. Key resources include Pete & Greta for pants, Song & Sung jackets, Krista Larsen, Flax, Sterling, Challet and Bryn Walker. Prices go as high as $825 for a luxury safari peacoat by Mambo Jambo. A sleeveless tunic by Jane Mohr for Dressed to Kill is $359, and a Johnny Was blouse is $238.

“We describe the store as an art installation we put our clothing into,” said Patterson. “Everything is vibrant and textural and interesting and the clothes are amongst that.”

“We source things that aren’t available everywhere,” Stevens added. “We have an appreciation for the reuse of things. We have handbags made from plastic garbage bags and jewelry made from recycled Barbie shoes.”

Chaos has a new outpost at the Greenville County Museum of Art in Greenville, S.C. Museum director Tom Styron fell in love with the store on a buying trip. “He said, ‘I love your sensibility,’ and invited us down,” Stevens said. “They cleared all the merchandise out of the store. It’s been renamed Chaos at the Salon.”