The capital of Sichuan Province is quickly becoming a bright spot for retailers, especially high-end and luxury brands. 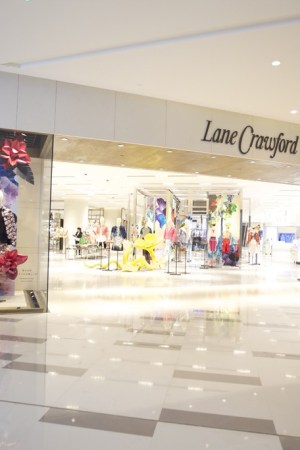 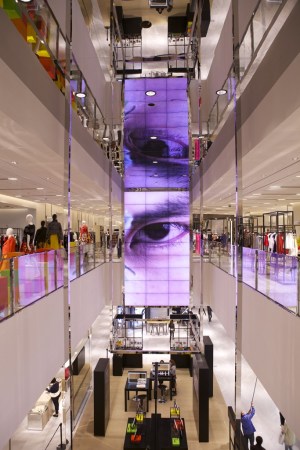 Inside the Lane Crawford store in Chengdu. 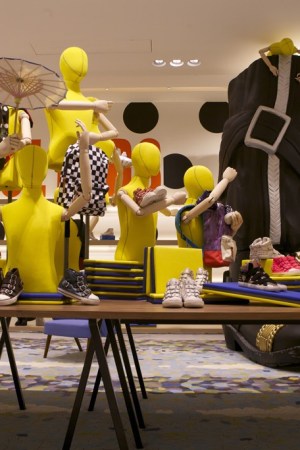 Inside the Lane Crawford store in Chengdu.

The L.A. Wellness Studio That Saw Growth Amid COVID-19

CHENGDU, China — The sun rarely shines in this city of 14 million located in the southwest of China’s vast interior, which is known for its tea culture, panda refuges, traditional gardens and laid-back milieu. Residents say the dearth of blue skies is, like in many Chinese cities, from pollution and also because Chengdu, the capital of Sichuan Province, is located in a basin surrounded by mountains, which prevent the clouds from rarely blowing away.

This story first appeared in the March 17, 2014 issue of WWD. Subscribe Today.

Despite the gray skies, Chengdu is quickly becoming a bright spot for retailers, especially high-end and luxury brands that in recent months have reined in expansion plans across the country while re-strategizing their overall presence in China due to changing consumer preferences, a cooling luxury market and a retail sector evolving beyond the once commonplace cookie-cutter shopping mall landscape.

So far, there appears to be no holding back in Chengdu.

As of December 2013, there are 31 retail projects under construction, which will put the city in second place behind Shanghai in terms of the total square footage of retail space, according to research from real estate consulting firm CBRE. Louis Vuitton’s Chengdu flagship, which opened in 2006, ranks among the luxury brand’s top three performing stores in China, according to real estate agency Savills. Burberry’s store, located in the same luxury mall as the Vuitton one, had more than 10 million yuan, or $1.6 million at current exchange, in sales in January alone, Savills said. Vuitton will open another Chengdu store this year.

The Chengdu International Finance Square mall, or CDIFS, located in the heart of the city’s main business district, opened in January. Developed by Wharf Holdings Ltd., also responsible for Hong Kong’s prestigious Harbour City mall, the 2.3 million-square-foot center features 300 luxury and lifestyle brands, 90 of which are new to Chengdu. These include Abercrombie & Fitch, Giorgio Armani and Loro Piana.

As a testament to the potential dynamism and perhaps unexpected sophistication of the city’s consumers, Hong Kong-based Lane Crawford is opening its third location in China in the CDIFS. The 82,000-square-foot store was soft launched on Saturday and will celebrate its grand opening in April. Last October, Lane Crawford opened a 150,000-square-foot flagship in Shanghai. Lane Crawford also has a store in Beijing.

The Chengdu location features an online shopping concierge where customers can pick up online purchases in-store, return items ordered via Lane Crawford’s Chinese e-commerce site or have purchases shipped home. There is also a 5,700-square-foot suite for VIP customers, LED screens displaying online editorial and other creative content, dedicated spaces for pop-up shops or exhibits, a restaurant and a beauty salon. More than 300 brands are featured in the two-story space, including Givenchy, J. Crew, Pucci and Alexander McQueen.

While omnichannel retailers are growing in China, their footprint has yet to really expand beyond Shanghai and Beijing, where it is perceived that more sophisticated consumers are looking for new shopping experiences as well as niche brands and products that reflect individuality and that cannot be found elsewhere in China.

Andrew Keith, the president of Lane Crawford and Joyce boutique, who was in Chengdu for the soft launch, said he believes the city’s consumers, many of whom are young entrepreneurs with more disposable income than their counterparts in Beijing and Shanghai, also have a taste for the unusual.

“We really feel the time is right to open in Chengdu,” Keith said. “They enjoy dressing up here and having fun with fashion. They like to take risks. They are open to new brands. In many ways, it is a city that really celebrates life. They enjoy going out to great restaurants. There is a great bar scene. There is a social scene that enjoys dressing up.”

Keith said that the company is “being conservative” with sales forecasts for the Chengdu store. “We have already been selling cosmetics, and if I look at the initial sales, they are very encouraging,” he said, adding that locations in Beijing and Shanghai have experienced double-digit sales growth despite the slowdown in luxury consumption. E-commerce sales have grown 200 percent over the past two years, he said.

The executive said he sees Chengdu’s younger generations as embodying Shanghai’s style with a bit more edge and color combined with Beijing’s arty, intellectual vibe. “We don’t consider Chengdu a second-tier city anymore,” Keith added. “It is a first-tier city.”

Keith said that part of Chengdu’s allure stems from the fact that the city is quickly becoming a regional shopping hub for at least 250 million people living in nearby provinces. Chengdu is at the epicenter of the Chinese government’s so-called “Go West” campaign whereby huge amounts of investment has poured into the city to make it the gateway for access to and trade with the country’s lesser-developed Western regions.

Residents say that over the past two years, Chengdu has undergone rapid change. New subway lines and roads have been built. There are international flights, including direct routes to London, San Francisco, Frankfurt and Vancouver. A Western influence is now more noticeable, with more restaurants offering international cuisine and more foreigners moving in to take advantage of job opportunities that no longer are as abundant in Beijing and Shanghai. It is becoming a major logistics hub with rail lines all the way to Poland. There are also plans to build railway access to Chengdu from Southeast Asia.

Scott Draper, a 27-year-old model who moved to Chengdu a few years ago from London, said there is a burgeoning fashion industry in the city with a plethora of local designers setting up their own stores on Taobao, China’s largest consumer-to-consumer e-commerce site.

Additionally, he said he meets young entrepreneurs opening up a range of businesses, including underground bars, in apartment buildings across the city. “Chengdu has an awful lot of very wealthy people,” he said. “It is perceived as a comfortable city. People make their money outside and come here to spend it. There is just a tremendous amount of opportunity here.”

Chengdu is now home to the regional headquarters of more than 200 Fortune 500 companies, according to the state-run Xinhua News Agency. There is also a major IT industry with factories producing 70 percent of Apple’s iPads. Half of Intel’s high-end chips are made in the city, Xinhua reported. From 2008 to 2012, the gross domestic product of Sichuan Province alone grew at an average rate of 13.6 percent, Xinhua said.

In 2012, Forbes ranked Chengdu as the fastest growing Chinese city over the next decade. In 2013, retail sales in Chengdu reached 375 billion yuan, or $61 billion, making it the eighth-largest retail market in China, according to Jones Lang LaSalle.

Retail experts warn that the market should be viewed somewhat positively. It is unclear whether there is enough demand to meet the overwhelming supply of new shopping malls, some of which are not located in prime locations or are run by developers that have little experience in commercial real estate.

In central Chengdu, vacancy rates are less than 5 percent, said Backy Fung, senior director of Savills’ operations in Western China, adding that the number of Hong Kong developers entering Chengdu should boost the confidence of luxury and high-end brands as such developers often have more sound retail projects than their Mainland counterparts.

“The consumption demand is great here,” Fung said. “Will the supply meet with the demand? That is a controversy. Some say yes, some say no. In terms of scale, maybe there is too much supply. But if the shopping mall has good operators, it will attract people.”

Fung, as well as many others interviewed, said that luxury consumption, as in the rest of the country, has declined in Chengdu. More residents are traveling abroad to make big-ticket purchases while Beijing’s sweeping antigraft campaign, which has heavily curtailed the buying of luxury goods as gifts between government officials and business associates, has had an impact.

Thomson Cheng, managing director of ImagineX, part of the Lane Crawford Joyce Group, said the company’s Maison Mode luxury shopping malls, which first opened in Chengdu in 2001, have moved from 20 percent year-on-year sales growth between 2001 to 2010 to single-digit, if not negative growth, in the past two years. He said he hopes the new, more dynamic, retail offerings entering the market will reinvigorate luxury consumption.

“We are [somewhat positive] about the potential for the luxury market in Chengdu,” Cheng said. “Traveling and shopping overseas will continue in 2014. Also, affluent Chinese often shop online for the best price globally. Yet it could be more than compensated when Chengdu is able to develop itself as a regional shopping destination for Western China. Retailers in Chengdu should look to reach out to consumers in the region in addition to local Chengdu customers.”

A possible indicator of the potential growth is the success of Times Outlets, an outlet mall complex also managed by ImagineX located on the outskirts of Chengdu. The shopping center opened in 2009 and features an array of luxury and fashion brands including Tod’s, Burberry, Coach, Nike, Max Mara, Bally and Ferragamo. Cheng said the outlets have experienced up to a 45 percent year-on-year sales growth rate over the past four years and that the business expects a record 2 billion yuan, or $325.2 million, in sales in 2014. While most of the shoppers are from Chengdu, a good percentage come from smaller cities in the region, he said.

Cheng said spending at the outlet malls is driven by rising middle-class consumers who cannot yet afford to travel overseas to shop or pay for full-priced luxury items in China yet want to “touch” the luxury lifestyle and so are eager to buy discounted products. The Chengdu Times Outlets “has exceeded my expectations,” he said.

“Middle-class Chengdu consumers are fanatically buying luxury and fashion goods,” a spokeswoman with Wharf Holdings, the CDIFS developer, said. “Their purchasing power has shown an upward trend with healthy economic growth and increasing incomes. Chengdu consumers are relatively more generous and confident about spending money on fashionable items as compared to consumers in northern China.”

Still, it seems that it ultimately remains unclear how disparate consumer segments might converge in Chengdu and what that will ultimately mean for brands. Those coming from outside the city tend to be less sophisticated, looking for luxury centered on showing off status via ostentatious labels. Within the city, a sophisticated shopper is emerging looking for something less obvious and widely distributed. Then there is the middle class buying entry-level luxury products, such as cosmetics and accessories. The future in Chengdu seems promising, but it also seems uncertain.