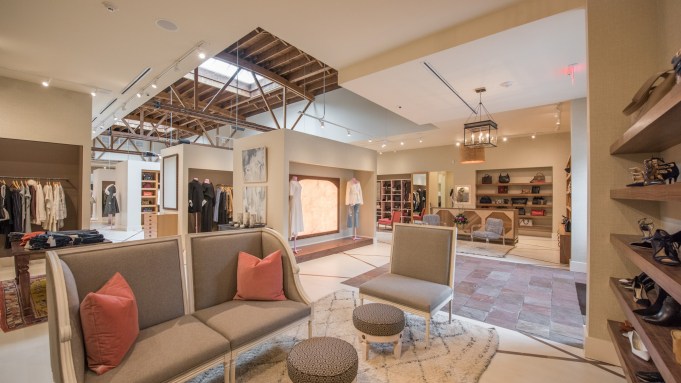 CHICAGO — Independent retailers here are managing to hit their sales numbers, but they’re having to find innovative ways to do it.

“Business is much harder, we’re finding we can still get there and grow but it requires much more outside-the-box thinking,” said Lance Lawson, co-owner of Space 519 in Chicago’s Gold Coast neighborhood, along with Jim Wetzel. “Before it was product that enticed people and five years ago, people weren’t shopping online like they are now. We have to differentiate ourselves. Once things are too readily available, our clients are not interested.”

At Neapolitan Collection in Winnetka, Ill., open for 16 years, the usual round of designer personal appearances and trunk shows is taking place.

“This is our busiest time of year from September to December,” said Kelly Golden, owner of Neapolitan Collection, where best-selling pieces this season include plaid looks by Dior, cashmere sweaters by The Row and Gabriela Hearst and faux fur coats by Erdem and Tibi. “Our business is strong, similar to last year. We’ve also added more categories; we’re selling coffee table books and fashion books, more home collections. Our beauty business is also really growing.”

“We’re working harder than 10 years ago. There’s so much online. It doesn’t make product more special, there are just different competing factors,” Golden said. “It’s hard to compare our store to a Neiman’s or Barneys. Even though we’re selling the same items, we have different strategies and overheads.”

In the age of Amazon, selling online is not in the luxury store’s future.

“The return rate is high, [customers] order four sizes and ship back three of them — it’s just an expensive business,” Golden said. “To have something out of the store for a month, it just doesn’t work for a small business.”

With a possible recession looming, Golden recalled the last downturn in 2008.

“As far as retailers, we’ll never be able to recover from the discounting that took place when Saks [Fifth Avenue] started. That was the start and change of everything. I had a runway [Alexander] McQueen dress for two weeks that Saks reduced 80 percent,” Golden said. “We’ll never get out of that cycle. It’s unfortunate for retailers when people are not prepared to pay full-price.”

“You start looking for exclusives and products no one else can carry,” she said. “More designers started developing a core selection of pieces that are in every collection. The big retailers got out of control and it really hurt a lot of brands.”

Before the holidays, designer Azeeza Khan, whose celebrity clients include Barbra Streisand and Bebe Rexha, will roll out a brand refresh, including a new e-commerce site and digital ad campaign.

“We are aiming to be more aggressive than the standard 5 percent based on the ROI we expect with putting a good amount of budget in digital,” said Khan, whose retail store is located in the 900 North Michigan Shops.

“We treat it war-room style, every day, even maybe twice a day, reading numbers, strategizing around the daily market reaction and being nimble to chase the growth,” Khan said. “The most important part of holiday is to identify early your season bestsellers and make sure you have enough inventory to carry you until the end.”

The retail landscape may be challenging, but business is bustling in some pockets of the city, like at Lakeview boutique Krista K, where owner Krista Kaur Meyers reported that October sales were up 15 percent — the store’s best October in the retailer’s 18 years in operation.

“One of the reasons we’ve survived is because we have always managed inventory really tight and watched cash flow. It’s just the way you need to run business,” Meyers said. “It certainly helps when you have a bad month or traffic is not as brisk.”

“For me, it’s looking at what’s happening in retail and looking at where retail is going and how can you continue to attract the younger consumer five, 10, 15 years from now because the world is changing,” said Meyers. “How retail is evolving and how do independent retailers continue to thrive and compete in that environment?”

“Because of Trump and all the uncertainty, it always feels like an election year,” Lawson said. “Certainly within the last six months. People are outraged. Being in a blue state, when you sell things that are non-essential, it’s a harder lure.”

Lawson said he’s sensing a slowdown in the market.

“People are being much more selective with how they spend their money. They’re still purchasing but not as freely as a year ago,” he said.

Still, business is up, with a projected forecast showing 5 percent growth in 2019 versus 2018, he said. “In prior years, we were in the 10 percent range,” Lawson said.

The boutique, which also has a 40-seat restaurant, experienced its first holiday season in 2018 at its new location at 200 E. Chestnut Street.

“The food concessions, women’s accessories and apothecary have allowed us to keep our revenue where it was,” said Lawson.

The retailer is focused on “midpriced” gift items in the $250 range for the holidays, Lawson said. The store’s average retail price is $495, with nothing retailing for more than $1,000, he noted.

“We have to differentiate ourselves from the online stores and Net-a-porter by having harder-to-find items,” Lawson said. “Especially downtown, you look at all the department stores and Intermix, there’s so much to choose from.”

Retailers say they feel the impact of Barneys New York closing its store in Chicago.

“As a Chicagoan, it’s a huge loss, but as a business owner, we’re benefitting,” said Lawson. “We’ve been able to pick up some vendors who were there and distribution opened up.”

Barneys was one of Khan’s retail partners, selling her designs at the Beverly Hills, Las Vegas and Madison Avenue stores and online.

“We had originally placed all our eggs in one basket with a multiyear exclusivity with them,” said Khan, who now sells at Shopbop and 11 Honoré. She will do a pop-up with Goop for the holidays and will launch at Kith with her new e-commerce platform in December. “In a super dynamic, oversaturated industry, I’m constantly putting deep thought into financial sustainability. Fashion is tough, recession or not, so I think we’ve grown a thick skin,” she said.