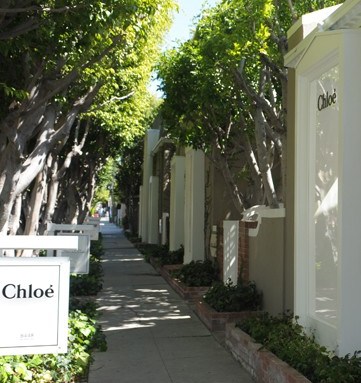 Although it took years to realize due to construction delays and permission glitches, Chloé’s new Los Angeles flagship looks right at home on Melrose Place.

And well it should. The 2,500-square-foot town-house-style boutique, drenched in natural light thanks to numerous skylights and eight-foot windows, spans two separate buildings linked by a landscaped courtyard.

The company-owned boutique opens to the public today and will be christened April 22 with an in-store cocktail party attended by Toledano and Chloé’s creative director, Hannah MacGibbon. It will be followed the next night by a party at Milk Studios hosted by Kate Bosworth and Chloë Sevigny, signaling what the French brand hopes will be a steady stream of famous customers.

Toledano declined to give sales projections. However, market sources estimate the store — located between the Temperley London and Oscar de la Renta boutiques and just a few doors down from where Neil Diamond once lived — should generate annual volume of about $3.5 million to $4 million.

The two-story building at the rear features a VIP area on the mezzanine, replete with a balcony overlooking the tree- and jasmine-lined courtyard. Toledano noted that Chloé parent Compagnie Financière Richemont has a VIP organization in Los Angeles that is assisting the firm in cultivating a Hollywood clientele.

The opening marks one of the first expansion volleys in recent years at Chloé, which had retrenched as sales momentum stalled under creative director Paolo Melim Andersson, whom Richemont said was not focusing “on the true DNA of Chloé.”

In a trading statement for the three months ended Dec. 31, Richemont said Chloé reported “lower sales,” but did not provide specific figures. Chloé figures are included in “other businesses,” which includes component manufacturers, which saw sales slip 6 percent at constant exchange rates to 78 million euros, or $102.9 million. Currency conversions were made at average exchange rates.

Toledano said he does not expect Chloé to post any “significant increase” in revenues in 2009, but he predicted stronger sell-through and a resumption of the brand’s expansion drive in about 18 months.

“Chloé today is in much, much, much better shape than a year ago,” Toledano said in his spare office on the Avenue Percier, the walls dotted with William Eggleston photos on loan from the Cartier Foundation. “The brand is now back on track.”

MacGibbon, who had worked beside Phoebe Philo before she exited in 2006, showed her second collection for the brand earlier this month, earning encouraging reviews for her sporty and borrowed-from-the-boys elements, which she mixed with feminine flourishes. Toledano cited a “very good season. I’m over budget.”

Besides designs more in tune with Chloé’s heritage, Toledano also credited an effort to broaden the brand’s price offering for the budding turnaround. “Today you need to have a segmented offer, and that’s something we accomplished in the last 18 months, in ready-to-wear, shoes and handbags. This will pay off. There was a need to talk to more clients,” he explained. “I’m very optimistic that in a year’s time we will see again major growth.”

Long a wholesale-driven company, Chloé embarked on a retail expansion about five years ago. Sales are now split roughly 50-50, and the brand ended 2008 with 67 fully owned stores and 28 franchises. Chloé recently opened two locations in Dubai, one in Doha, Qatar, and two in China. Coming this summer is a franchise location in Beirut.

China and Europe are considered expansion priorities once the brand resumes a retail rollout, with Chicago among major U.S. cities slated for a flagship.

Accessories, including jewelry, handbags, shoes and small leather goods, are housed in the one-story structure facing the street; the two-story back building is home to rtw.

The boutique carries the full range of Chloé merchandise, from silver charm bracelets for $170 and Sally handbags for $1,995 to a white summer skirt with crystal embellishment for $2,495 and a white linen dress with embroidery retailing for more than $6,000.

Toledano noted assortments would likely be skewed to cocktail and evening, including in handbags.

The three-block stretch once commanded rents of more than $15 a square foot per month, a range that has fallen to $10 or below a square foot monthly amid the recession.