Christmas at Rinascente Comes With Tradition, Investments and Digital Learnings

After unveiling its holiday windows via a Zoom call, the Italian department store is to relaunch its Florence location.

MILAN — Not even Rinascente‘s expert visual merchandisers could have planned the coup de théâtre of having the first snow of the year silently whitening the roofs of Milan on Wednesday, when the department store unveiled its Christmas windows.

Conversely to its traditional physical event, this year the ceremony was hosted via a Zoom call, during which Rinascente’s chief executive officer Pierluigi Cocchini introduced the seasonal theme.

Dubbed “A Christmas Journey,” the project hinged on two main concepts, both intended to enhance artisanal traditions and reconnect the audience with childhood memories.

“This has been a tough year but we’re here to offer a lighthearted moment of hope,” said Cocchini, who, for the first time, unveiled the windows of four Rinascente locations and not just the arched ones overlooking Milan’s iconic Duomo cathedral.

“This is a decision we took in light of the investments we made and didn’t stop making this year,” said the executive. He specifically mentioned the renovation works implemented in the Milanese flagship — with the restyling of the floors dedicated to women’s wear and the addition of a jewelry space — and the ones that are being finalized in the unit in Florence, which will officially reopen on Dec. 16.

“Three years ago we unveiled the Roma Tritone location after an investment of 250 million euros, last year we renovated our unit in Turin and this year we invested 15 million euros for the one in Florence. These stores have been revalued and deserve a different [attention] compared to before, also considering the social role a department store like Rinascente can have in these cities,” said Cocchini.

In particular, for the holiday season the retailer partnered with Lemax — a Chinese company specialized in music boxes and miniatures — to develop a series of windows in Milan and Rome re-creating enchanted Christmas villages with white slopes, moving trains and carousels, floating clouds and hot-air balloons. 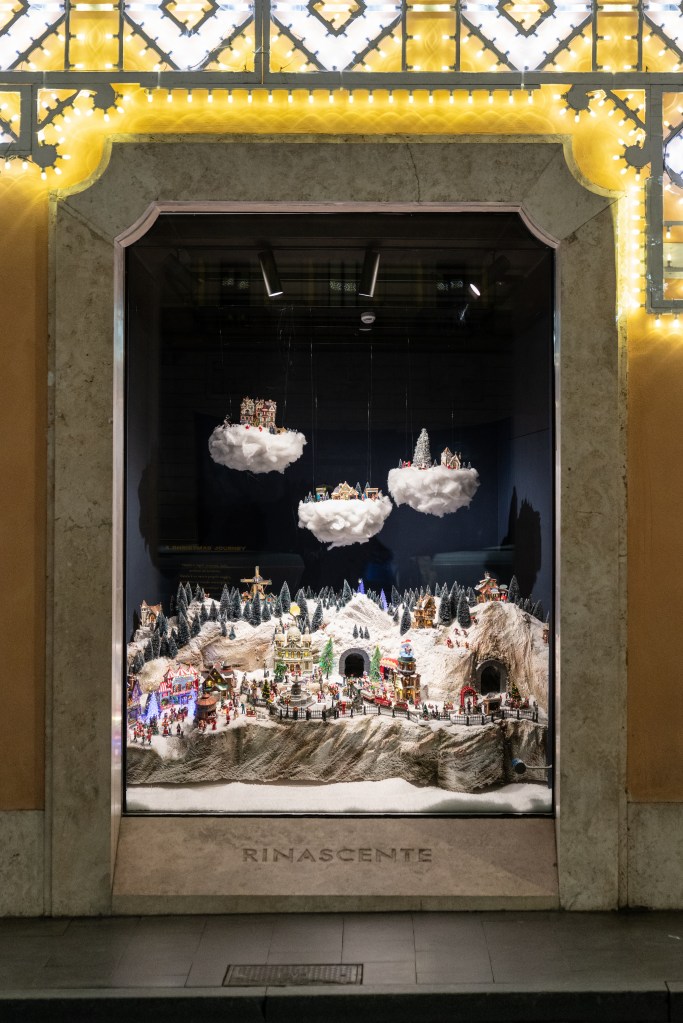 On the other hand, Rinascente continued to support San Gregorio Armeno, a historic street in Naples known for local artisan ateliers specializing in handmade figurines for nativity scenes. After Milan last year, installations of moving statuettes, rich nativity scenes and larger-scaled statues of popular local actors and personalities developed by three ateliers were replicated for units in Turin and Florence.

Cocchini said the group will continue to focus on artisanal traditions also in the coming years. To reinforce the approach, he revealed that, as part of its restyling, the Florence location will feature corners dedicated to Italian craftsmanship, specifically in the leather goods, textile, jewelry and hat-making sectors. Also new: the space dedicated to the men’s wear category will be doubled and the footwear section expanded to include two, 2,153-square-foot corners for men and women. 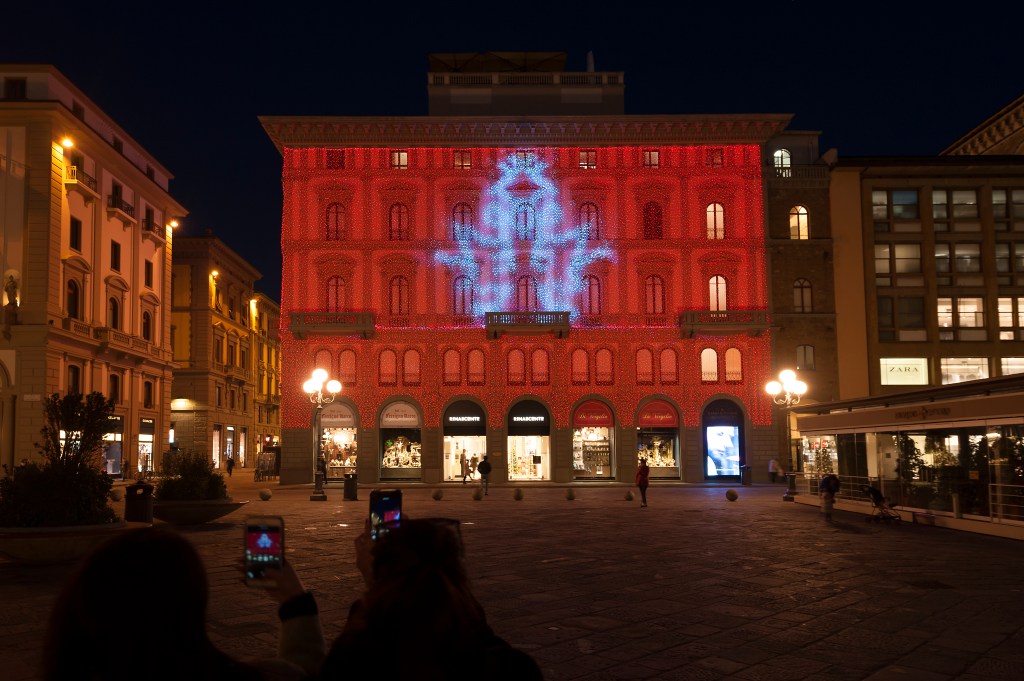 The Rinascente department store in Florence, which will reopen on Dec. 16.  Courtesy of Rinascente

Despite the two different window themes, for the holiday season all stores were additionally embellished with lighting installations covering their facades. In particular, the Milan flagship — the jewel in the crown of the retailer owned by Thailand’s Central Group — also appeared on an ad in local daily newspaper Corriere della Sera on Wednesday, flanked by a letter dedicated to the city signed by Cocchini and the store manager Giorgio Caputo.

“Dear Milan, 2020 has been a difficult year. We’re fighting together, working hard with all our forces…We believe in the restart, we believe we will overcome this moment, we believe in you, dear Milan,” read part of the message, which also invited customers to partake in the store’s Christmas experience in person as well as on its web site.

“Of course we don’t expect a traffic comparable with last year, so we will post images and video contents on our social platforms,” explained Cocchini. To wit, the company has been enhancing its digital footprint, with the launch of its e-commerce site earlier this year.

The platform, which required three years to complete and an investment of 20 million euros, now showcases around 50,000 products from 800 brands operating in different segments. As per Cocchini’s words, it experienced a “tormented start” due to the demand that exceeded expectations and left the company busy adjusting logistics procedures accordingly.

The executive also confirmed the sales estimates shared at the launch of the platform, when he said the online store is expected to generate revenues of between 80 million and 100 million euros in two years.

Nevertheless, Cocchini firmly believes that brick-and-mortar stores will remain at the core of the company’s strategy. “The e-commerce is a channel that completes the experience of Rinascente, which remains a collection of physical stores. The online platform can live only thanks to the great reputation of physical units…Digital is important but no online store can substitute the sensorial, physical experience delivered in stores,” he said. 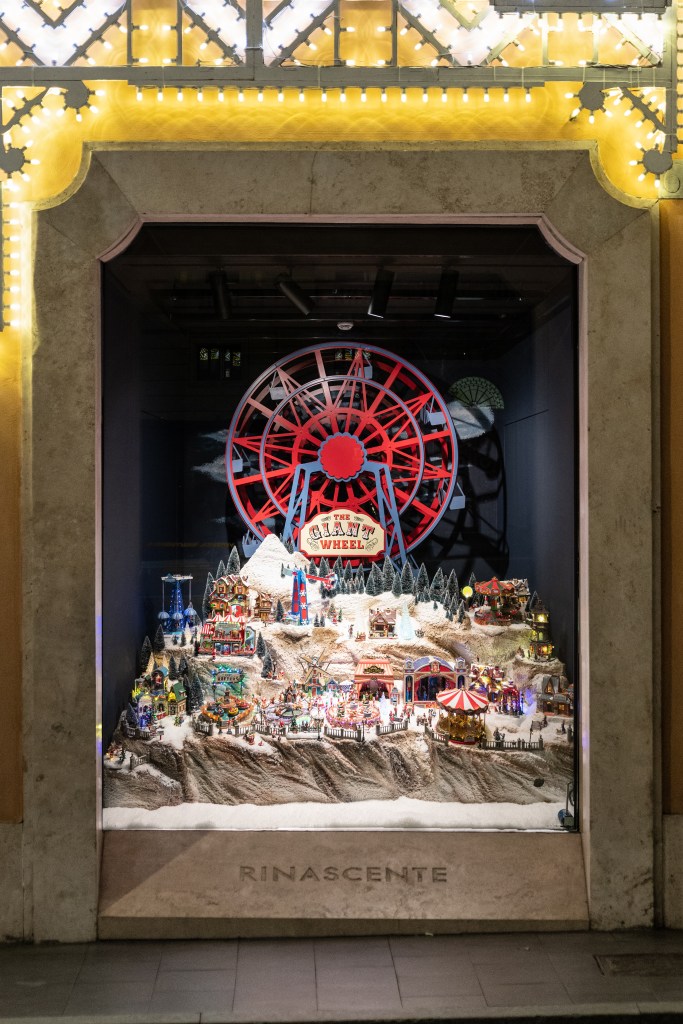 So far, online sales have not compensated for the losses caused by the closure of brick-and-mortar locations due to the restrictions issued during the second wave of virus outbreak this fall. Overall, Rinascente expects to close 2020 with sales down between 30 and 40 percent compared to last year, when it registered revenues of 800 million euros and reported double-digit growth compared to 2018.

“Consider that COVID-19 has also affected the traffic in Italian cities. In the past, local customers accounted for part of our sales but 35 percent of these were generated by tourists from abroad, and this share just disappeared this year,” said Cocchini, who believes the tourist influx will be restored in the second half of 2021 “depending on the distribution of the vaccine.”

In the meantime, the retailer strengthened its on-demand service launched three years ago that enables sales assistants to support customers’ shopping experience remotely via WhatsApp messages, as well as implemented livestreaming sessions on the business-to-business front to facilitate operations with Chinese buyers.

“The lessons we learned this year concern the digital progress we made, especially internally, in our way of working daily. In normal conditions, it would have required five years for us to achieve this result, develop these skills and imagination and be able to work this way remotely,” concluded Cocchini.