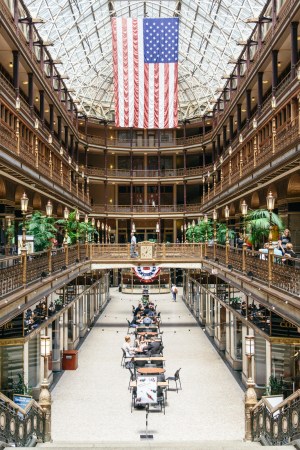 Bally Bets on the U.S. Market With New York Flagship and Growth Strategy

CLEVELAND — Donald Trump’s controversial candidacy and a shortage of corporate sponsors for this year’s Republican National Convention combined with anxiety over protesters has dampened business for some retailers, restaurants and bar owners in downtown Cleveland.

The weaker-than-anticipated business experienced by some merchants came even as the Cleveland 2016 Host Committee and Downtown Cleveland Alliance partnered to generate business in the downtown area, which is in the early stages of a revitalization plan.

Emily Lauer, senior director of public relations for the host committee, put the estimated amount of direct spending from the convention in Cleveland at $200 million to $250 million, based on the $214 million in spending Tampa reported it saw in money coming in from the 2012 Republican convention.

“We do feel as though we are on track to reach that,” she said. “That is the short-term benefit of hosting a convention.”

JB Dunn, partner and cofounder of J3 Clothing Company, a luxury men’s wear store that has two retail locations in Cleveland, said his “RNC experience has been a little less than expected. We’ve done a decent amount of business but not a phenomenal amount of business.”

Dunn’s company opened a small concept shop inside the historic 1890s building named The Arcade that houses shops and restaurants and is anchored by a Hyatt hotel.

The host committee and DCA launched an initiative to help bring new tenants into The Arcade, using the Republican convention as a catalyst to draw tenants and business to the property. It drew up short-term leases and brought in what Joe Marinucci, president and chief executive officer of the DCA, said are seven pop-up shops.

“We worked with the owner of The Arcade and a commercial brokerage firm and the host committee to identify some retailers who would be interested in providing pop-up shops in The Arcade during the convention,” Marinucci said.  “We had good response. We had a number of retailers opened 10 days before the convention began. Our understanding, although we don’t have anything definitive yet, since opening they have done very well in The Arcade. Our hope is that the pop-up experiences will allow them to make a longer-term decision to stay at the location.”

Dunn of J3 Clothing said he believes business is off because of the controversy surrounding Trump.

“I think anybody who paid attention to the news knows that due to the controversy surrounding the candidate, some major corporations are cutting back or cut out sponsorships of the RNC,” he said. “When that happens, you have some major clients who don’t come or you have less of them who come.”

Among those reported to have pulled back support were Apple, Wells Fargo, UPS, Motorola, JPMorgan Chase, Ford, Microsoft, Coca-Cola and Walgreens.

The nation’s largest retailer, Wal-Mart Stores Inc., was one of a handful of corporate giants that did not pull out, despite pressure from anti-Wal-Mart activists who held a nationwide protest in the run-up to the convention.

Wal-Mart donated $15,000 to the Committee on Arrangements for the 2016 Republican Convention, according to Federal Election Commission data compiled by the Center for Responsive Politics, a nonprofit, nonpartisan research group in Washington that tracks money in U.S. politics. The retailer also says it gave the same amount to the organizers of the Democratic National Convention.

But the absence of other big-name sponsors, which have traditionally been visible at past conventions, has had an impact.

“Because of the  controversial candidate,  you have heightened security, which makes it a little more challenging for people to get around downtown,” Dunn said. “I have a lot of friends and business associates who own other businesses throughout the city, particularly those who own bars, restaurants and services, and all have said to me, ‘My business is down this week.’”

Alan Glazen, owner of GlazenUrban LLC and a partner in A-Z Taverns, which owns bars and restaurants in downtown Cleveland, said he has lost business as a result of the conventions.

“I own six businesses downtown and near west side.  They are all down.  Regular customers are staying home because of the RNC,” he said. “Delegates seem afraid of the neighborhoods.  They get off the buses with their armed guards and seem determined to not make eye contact with locals.”

He said business is down about 20 percent collectively.

Glazen said he didn’t buy into the hype of convention and city officials but “never imagined a loss.”

“I thought it would have minimal impact. I’m disappointed that it has actually hurt our businesses and those of our friends,” he added.

Some businesses, on the other hand, were reporting an increase in sales because of the convention. At Geiger’s, a clothing and sporting goods retailer, apparel was selling well at the downtown store, according to Jackie Blades, the store manager.

Blades, which operates three stores in the Cleveland area, estimated sales were up 30 percent to 50 percent because of the convention. The store might have attracted more business because it featured convention-related merchandise made by a local company that Blades said was popular.

“We have never experienced this before at any of our stores, being so close to such a big convention,” she said. “We had high hopes that sales would be up and we stocked well.”

Blades said the store is “far enough away” from the protests that the store traffic has not been affected. “We’ve seen people walk past but nothing has been crazy or made us feel like we want to shut our doors and close for the night.”

Dunn of J3 Clothing said the weaker-than-expected sales from the convention will not have a bearing on the company keeping its small store concept in The Arcade.

“I look forward to the post-RNC thing,” he said. “We made a bigger commitment than just a pop-up shop. We partnered with others. Our intent is to stay here as long as it is being productive and showing positive revenue.”