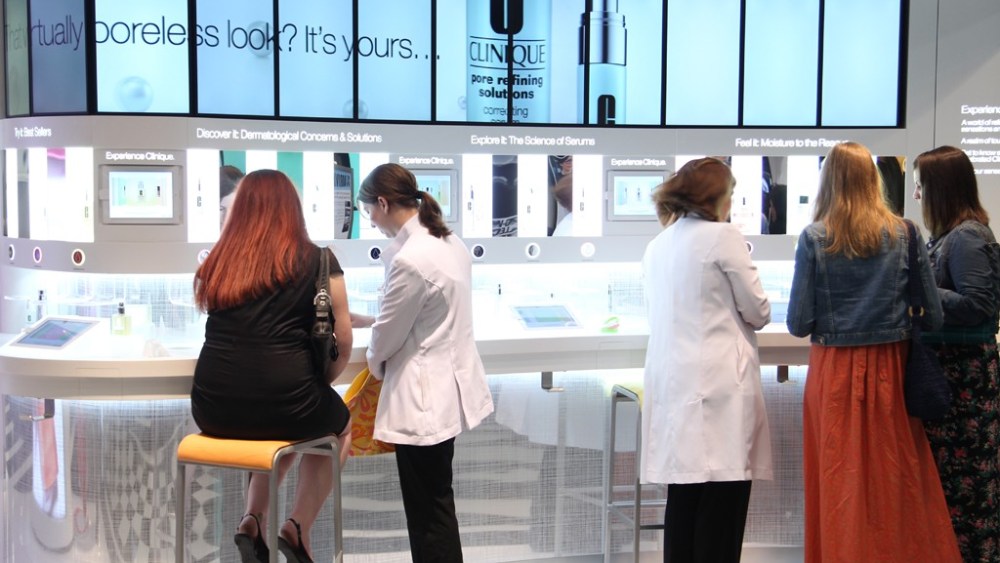 Lynne Greene aims to put the pleasure back into department store shopping.

As part of the latest chapter in her quest to use innovation to make the at-the-counter experience more meaningful, the Clinique president has opened an Experience Bar as part of the brand’s sprawling counter at Bloomingdale’s 59th Street  flagship in Manhattan. The bar, the newest facet of Clinique’s Service as You Like It program, features not only seven iPads that provide personal analysis and dispense skin-care advice in nine languages, but offers an array of product dispensers that could be known as the world’s first musical testers.

“We are in the business of innovating service,” said Greene, the global brand president of Clinique, Origins and Ojon at the Estée Lauder Cos. Inc. “You cannot innovate service without giving a new look and a new feel.”

Ricardo Quintero, senior vice president and global general manager of market development for Clinique, added, “It’s all about being comfortable.”

Quintero was alluding to the experiential quality of the bar and the advantages it offers, particularly for the multicultural crowd of travelers that inhabit Bloomingdale’s.

In addition to the iPads installed on the bar, there are 11 leading Clinique products mounted on the wall, arranged in chapters of significance — Best Sellers, Dermatological Concerns and Solutions, Serums and Moisturizers. Viewing screens above the bar flash videos, still images and information. The tester units are designed not only to dispense product samples but to provide a little surprise. When a shopper presses the button, there is a little musical interlude that is meant to associate a tune with the character of the product. For instance, the dispenser for Dramatically Different Moisturizer announces the release of the sample with a somewhat thundering tone.

Greene, who has the ability to see the big picture through small details, had become interested with the connection between sound and a consumer’s appreciation of a product. Her interest was piqued when she learned that a group of BMW engineers had obsessed over sounds of seat belts clicking and car doors slamming and whether the timbre aroused feelings of satisfaction in customers. The influence of sound also was underscored by a report that Harley Davidson had spent six years trying to patent the roar of the brand’s motorcycles.

Greene said her idea was to make “the sound effect match the benefit.” While Clinique executives wanted the menu of sound to be distinct, “they spent the last week making sure the volume was not too loud,” said Greene, referring to the period before the June 15 opening.

The first step in using the bar is to answer nine basic questions on one of the iPads,  which are programmed with a proprietary software program. It can now be operated using English or Spanish. But by the end of July, the company expects the bar to be fully operational in French, Mandarin, Japanese, Portuguese, Russian, Farsi and Korean, as well. Quintero noted that the customer mix includes Chinese, Brazilians, Russians and visitors from the U.K.

The combined answers to the nine questions can result in 180,000 possible recommendations, with 52 million logic pathways in the program, according to the company. Customers get a printout of their recommendation. Quintero pointed out that Clinique uses a heavy-duty grade of paper to convey a sense of durability. Also a shopper can e-mail the list of suggestions to themselves.

“I think it’s great,” said Michael Gould, chairman and chief executive officer of Bloomingdale’s. He observed that initiatives like the Clinique counter bar are needed to make the store appear more exciting and interesting. Once a sense of buzz is established, the beauty advisers need tools to develop a customer base. “We are in a world where relationships count,” he said. “What is the element of trust?”

Moreover, a store like Bloomingdale’s, which is a top tourist destination, continually strives to attract more and more customers who speak a multitude of languages. “We have to find ways to make it easier for the customer,” Gould said. He added that the Experience Bar also catches the eye of passing customers, a plus considering that the location is heavily trafficked. “It’s a fast aisle,” he said, noting that a customer might rhetorically ask, “Why am I stopping?”

The Bloomingdale’s Clinique counter is one of three in the world. An installation has already opened in Lotte Jamsil department store in Seoul. The third unit at Selfridges, in London, is due to go into operation in September.