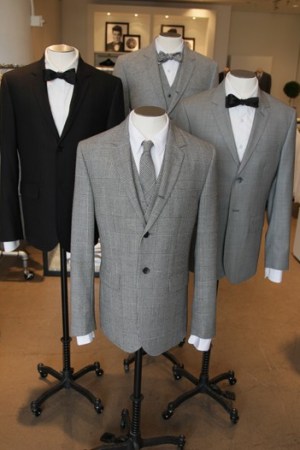 Club Monaco is turning to men’s wear for fall.

Under the direction of Timothy Farah, the new vice president of men’s design, the Polo Ralph Lauren-owned retailer is widening its fit options and creating a collection that encompasses tailored clothing, sportswear, furnishings, outerwear and accessories. It also is bringing in third-party vendors for the first time, adding Levi’s 501 jeans for men and women.

Farah joined Club Monaco, which operates 60 stores in the U.S. and another 60 internationally, seven months ago to oversee design of the men’s collection. Before that, he was with Brooks Brothers working on the Thom Browne-designed Black Fleece collection. His impact will be felt when the fall line begins hitting stores in August.

In the past, the company said, design of men’s and women’s was under the direction of the same person. Now Farah works with Caroline Belhumeur, vice president of women’s design.

The men’s collection is the “boyfriend of the Club Monaco woman,” Farah said. “We want to make sure our men’s product is as elevated as our women’s.”

The most visible change is in men’s suits, where Club Monaco will offer two silhouettes, the Wright and the Kennedy. The Wright is a modern, slender fit for the more fashion-forward customer with narrow lapels, high-button stance and shortened center-back length. Pants are flat-front with a narrow leg and barrel-cuffed hem. The Kennedy is designed for a more classic customer with a straight-leg pant and a traditional lapel and closure. Both models retail for less than $500 and feature full-canvas construction, roped shoulders, pick-stitching on lapels and pockets, working buttonholes and oxford-weave striped linings. For fall, fabrics include tropical weight wool and flannel in solid heather, nail head and prince of wales. Blazers are now offered in short and long lengths.

“The suits are the important building blocks to the collection,” Farah said. But they’re designed to work with the other elements of the line, which include oxford shirts, cashmere sweaters, quilted vests, puffer jackets and chinos.

“I think of it like a true collection, not categories of items,” he said. “Guys can dress head-to-toe in a suit or they can break it down.”

Farah said by offering options, Club Monaco encourages customers to select the best pieces to create their own individual look.

“The entire collection has been elevated in terms of quality and sophistication, but we’ve kept the price points,” he added.

The company would not disclose what percentage of the mix men’s wear represents, but said it is viewed as a growth area.

In releasing fourth-quarter earnings May 27, Polo reported that same-store sales at Club Monaco were down 20.8 percent. For the year, comps fell 9.7 percent. However, first-quarter business has been strong, and the company is expecting a bump-up in sales for fall as frugal consumers look for lower-priced apparel options, a spokeswoman said.

One switch is the addition of Levi’s jeans. Three styles for men and two for women will be offered beginning in August. Although Club Monaco will continue to have its own private label denim, many customers traditionally pair its shirts and jackets with Levi’s, prompting the addition, the spokeswoman said, adding the company is looking at other third-party products as well.

“We will pick and choose very carefully who we bring in,” Farah said.

This is quickly becoming a trend among vertical retailers. J. Crew has added Thomas Mason shirts, Macintosh jackets and other classic men’s wear items to its mix in the past several years.

Farah said the fits reflected in the suits also will be available in pants. Shirt styles have been updated and are available in slim, classic and relaxed fits. “It’s our intention to offer options,” he said. To support the new men’s wear effort, a marketing campaign will be launched in September.